Today I would like to offer something a little different for Hebden Bridge Chess Club members in the form of a lengthy post on the subject of check and checking! 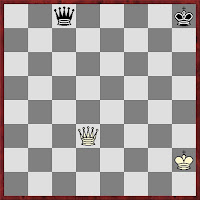 “How dull!” I hear you cry. “What can there possibly be to say at any length on this most trivial of chess-related subjects?”
All I can say is, please bare with me folks because I really think this journey is worth going on! Let’s start with a question. Have you ever played a game where checks occur in a series of consecutive half moves? Probably you have even if you don’t remember. The position on the left is a simple and typical example.

White, to play, can play 1.Qh3+ to which Black will reply with 1…Qxh3+ and we have two consecutive checks. This isn’t uncommon and some forcing tactical sequences can generate even more than two consecutive checks. By way of an example take a look at the position below which I found on Tim KrabbÃ©’s treasure trove of a website, “Chess Curiosities”.

The game continued with…

KrabbÃ© thinks that this game may share an “unofficial” record with another game (below left) for the longest series of mutual checks in tournament play.

Both these examples are very unusual indeed in normal play and all the more attractive for it.

Now take a few seconds to look at the next position below left. It’s White’s move.

ï»¿ï»¿The first thing you may notice is that White can play 1.Re5++ and it’s checkmate. Very pretty! But this isn’t a position from a game or even a problem. It is something even more unusual. Play through the moves in the viewer below and see what actually happens next.

Wow! 29 consecutive checks! This composition belongs to a category of chess problems called “Fairy Chess” in which the normal rules and conventions of orthodox chess problems are usually bent a little. The composition above was actually entered into a competition Tim KrabbÃ© set for the Dutch chess magazine Schaakbulletin (which has since metamorphasised into “New In Chess”) back in 1978. At the time he kicked off the competition, KrabbÃ© thought that the record for a series of mutual checks in a composed position was 28 half moves and held by one G.Leathem.

On his site, KrabbÃ© goes on to say how delighted he was when 3 readers managed to beat Leathem’s mark. One of those was van de Loo and another (H.Gieske) matched his mark of 29. However, the winner of the Schaakbulletin prize was an endgame composer called Rol who stretched the record out as far as 31.

By now readers will have realised that we have entered into a magical realm where chess ceases to be a mere game and starts to become an art form. Some artists use music to convey their genius; others use words and rhyme; still others use oil and canvas or clay. It is only a select few who choose to use the 64 squares and 32 pieces of a chess set to express their imaginations.

So, the question now is; how far is it possible to take this theme of consecutive checks? 35, 40, 50? Well, the story doesn’t end in 1978 because during the course of his research KrabbÃ© discovered (much to his disappointment!) that Rol’s ‘world record’ wasn’t a record at all. His mark of 31 had already been bettered. First KrabbÃ© unearthed a series of 32 checks by an Englishman called A.J.Roycroft from as long ago as 1956. He then went on to find a more recent position (1974) by a German composer, Werner Frangen, who set the mark even higher at 35! As far as I know (KrabbÃ© doesn’t say) this may very well still be the record for consecutive checks where having promoted pieces on the board in the start position is not allowed.

Even this is not the end though. The number of consecutive checks that are possible soon escalates once you allow the composer to use promoted pieces in the starting position of their solution. Indeed, Frangen himself produced an effort in 1974 that set the bench mark very high at 45. Then in 2007 a new gladiator entered the contest for the record and has continued to raise the bar by increments ever since. Sampsa Lahtonen of Finland has been conducting a personal duel with anyone who tries to take the record off him since he bettered Frangen’s 45 mark in 2007. By the end of 2007 (a very busy year for this record it seems!) he himself had increased the mark to 47 and then lost his record to his compatriot Unto Heinonen who reached 49 moves. In 2008 he snatched the record back by reaching the landmark of 50 consecutive checks only to lose the record once again, this time to the Russian, Alexei Kanyan, who posted 51 moves.

After the Russian threw down this gauntlet, Lahtonen went quiet for 2 years but then, finally, at the end of last year, Tim KrabbÃ© published Lahtonen’s latest effort which currently stands as the world record position for consecutive checks in a legal position with promoted pieces allowed. The new record is 53 moves!

What makes this acheivement all the more staggering is that, in order to verify the legality of the position Lahtonen had to construct a ‘proof game’ setting out all the moves that could be played to reach the start position of his composition. Clearly the long, dark, cold nights of the Finnish winter hold nothing but the prospect of extra time to compose for Lahtonen!

I must confess that I didn’t really use to enjoy or understand chess problems and compositions. To me it wasn’t real chess. Having recently spent some time getting to grips with what was involved in setting this record however I think I’ve finally grasped the point. Problems, studies and compositions are really the only way to express the full depth, beauty and wonder of the game. A game of chess is all about combat. You play against your opponent and you try and win. But when problemists compose they aren’t fighting anyone or anything except the pieces and the squares themselves. They fight, and sometimes they win and they do things that you can’t even begin to imagine are possible when you sit down to play a game over the board or online. I think I’ve finally found an art form that I can really appreciate!

3 Responses to “Check these out”