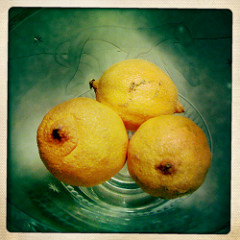 Unfortunately for Hebden Bridge ‘A’ it’s now three lemons in a row. Hopefully they can break their losing streak next time out. This image is used under Creative Commons terms and sourced from Nils Ohman’s Flickr photo stream.

Time for another update on the Calderdale League 1 season as round 4 took place last week.

The first thing to note is the alarming absence of completed fixtures involving Huddersfield.  They should now have played four matches but the league website only gives one result! What on earth is going on? Well, the grapevine suggests that the round 2 fixture they had slated to play at home against Halifax ‘B’ was postponed due to Halifax not having a full team available (and when did that ever stop a match from going ahead?) The round 3 match at home to Belgrave has not been entered on the league website yet (why?) though we understand it was played. And the round 4 match away to Todmorden ‘B’ was postponed due to a scheduled late night road closure in Hebden Bridge that prevented the away team from getting back to Huddersfield via that route after 10pm.

Fair enough on this last perhaps, but Hebden themselves were playing at Todmorden and managed to get not one but two teams to the Todmorden Working Men’s Club only to find that Todmorden themselves had failed to get a team together for a handicap team match that was scheduled for the same evening as the league 1 matches. I imagine that Captain John Kerrane will seriously consider extracting a full default from his opponents for allowing a team, predominantly comprising juniors, to travel to Todmorden without cause.

But enough of my moaning. I’m getting cantankerous in my middle-age. Let’s get down to business. Title holders and league leaders Todmorden ‘A’ were hosting Hebden Bridge ‘A’ whilst Halifax ‘B’ took on Belgrave at home and Halifax ‘A’ played Brighouse. The two matches involving Halifax both ended in the same score but with opposing outcomes as Halifax ‘A’ beat Brighouse 4 — 1  (Brighouse defaulted a board for the third match in a row but at least they turned up!) while Halifax ‘B’ fell by the same score line to Belgrave.

The match at Todmorden should have been a breeze for the home side if you looked at the raw statistics. Despite missing Pete Mulleady, Todmorden ‘A’ still out-graded Hebden ‘A’ on every board except board 5. And yet, Hebden, up against top-class opposition for the second successive match, acquitted themselves pretty nobly and fought hard on every board. In fact, by mid-evening they were more than holding their own.

The first game to finish was on board 3 where Heben’s Dave Shapland beat Andrew Clarkson. Todmorden lose very few games at home so this was a notable achievement. The more so as Dave was under great pressure for most of the game and was only able to pounce on a single chance given to him when Andrew misjudged a complicated variation where Dave offered his queen in exchange for a bishop and rook. This was one occasion when the player with the advantage should have held his positional pressure rather than cashing it in for material, but such decisions are notoriously hard to assess and on this occasion, Andrew got it wrong.
Soon after, Pete Leonard also managed to extricate himself from what looked like a pretty dreadful position to draw against Phil Cook. The game turned a little messy and Pete managed to coordinate some counter play which saved his bacon. This was another over-turning of the statistical odds and Hebden found themselves a point up with three boards in play.

Any hopes of a stunning and unexpected victory were soon dispelled however when Dave Innes beat Martin Syrett with the White pieces for the second time in three fixtures (he also won the board 5 game when Hebden met Tod ‘B’ recently). This levelled the match score, but there were two close games still being played.

On board 1 Hebden’s Andy Bak was a pawn down against Martin Hamer having been made to suffer positionally from a very early stage in the game. He battled gamely to hold his own and at a few moments it seemed he might even be able to hang on for a draw. However it wasn’t to be as Martin played a rook and minor piece ending with great precision to bring home the full point.

The final nail in Hebden’s coffin came when Dave Patrick put an end to Andy Leatherbarrow’s spirited resistance. This was a very tight game. Andy had made a mistake in the middle game to give Dave a pawn’s advantage but with queens, a rook and a minor piece each still on the board it looked like Andy might have some chances to hold. It was predominantly through attrition and persistence that Dave finally ground his opponent down. Finally, winning a second pawn and simplifying the position was curtains for Andy who had also used almost all of his available time to fight to the death.

Unfortunately that result meant that Hebden Bridge lost three matches in a row for the first time in almost two years. Their next match is at home against the bottom side in the league Halifax ‘B’, so hopefully they can end their losing run. In the game viewer below you will find Andy Bak’s game against Martin Hamer, Pete Leonard’s game against Phil Cook and two versions of Dave Shapland’s game against Andrew Clarkson. Andrew has very generously sent his thoughts on what was a painful defeat and it is interesting to compare the two players thinking during the course of their encounter.

Last night the Trades Club hosted round 1 of the Calderdale Individual Championship. Look out for a report on that here soon.