Pete Leonard (left) was made to work extremely hard for his decisive win against John Morgan on board 4.

Two of the three scheduled Calderdale League 1 fixtures were postponed on Monday night as away-players had difficulties getting to venues amidst the travel chaos caused by the miserable stormy weather. Hebden Bridge ‘B’ were unable to get to Todmorden for their match with the league champions (although the largely Lancashire-based Todmorden team was able to get there) and Huddersfield were also forced to abandon their trip to Halifax ‘B’. There will be plenty of time to re-arrange these fixtures later in the season.

That just leaves us with one match to report on. Thankfully it was an absolute stonker as Hebden Bridge ‘A’ travelled to league leaders Halifax ‘A’. With Halifax having deployed their strongest possible line up in the previous round of fixtures against Belgrave, Hebden were expecting a very warm reception and when it became clear that the home team would be only slightly weaker than they were for the Belgrave match (Carlos Velosa replacing Richard Porter on the bottom board) it was clear that they were going to get one!

Hebden themselves had the spine of their team all present and correct. Matthew Parsons, Dave Shapland, Pete Leonard and Nick Sykes are all in good form at present and they were joined on this occasion by just one of the two Bak brothers as Andy made his fourth appearance of the season. Despite having such a strong line-up themselves, Hebden were out-graded on all but the top and bottom boards and therefore expected a very tough struggle although having the White pieces would certainly be of assistance.

A tough struggle was exactly what they got although three of the five games were over by 9.30 which is quite an unusual occurrence for such a heavy weight clash. This was no reflection on the level of aggression on display however as two of those three games ended decisively. 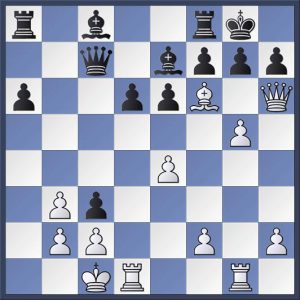 The final position from the game between Dave Shapland and Bill Somerset deserves a picture. Bill had overlooked White’s winning move 18.Qh6!

On board 3, Dave Shapland was up against Bill Somerset and took the opportunity to deploy the highly complicated Velimirovic Attack against Bill’s Classical Sicilian set up. Dave correctly anticipated that Bill would not shirk a theoretical discussion and saw the game develop as he expected it to right up to move 11 when Bill chose to divert from the mainline and the players were no longer playing from their re-collection of the opening books. The game still developed in highly complex fashion with Dave offering a piece sacrifice on move 15. By move 18 it emerged that Bill had overlooked a key idea in the position and was getting check-mated. As always with such complicated games, chess software subsequently found numerous ways to improve for both players, but on this occasion it was Bill who made the decisive error.

At about the same time that this game was concluding, so did the game on board 5 between Nick Sykes and Carlos Velosa also finished. Carlos surprised Nick by not playing his habitual choice of 1…b6. Instead he played classically and the players soon reached a Berlin Variation of the Ruy Lopez. Of course this opening has the reputation of being pretty stodgey at the highest levels of the game but Nick kept tension in the position early on and the game developed in an open and tactical manner. In this instance the tactics heralded simplification rather than a decisive advantage and the players soon decided to conclude a peace agreement.

With the two team Captains (Carlos and Dave) now having finished their games, they were completely available to fret and worry over the remaining results. Halifax levelled the match very soon after board 5 was finished as Andy Bak, who had earlier appeared to have a promising position and an extra pawn against Winston Williams, made a tactical miscalculation and found himself on the end of a decisive attack. The match was all square with two games to finish. 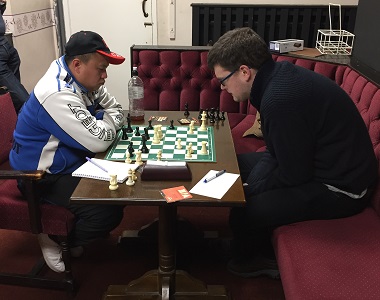 Two of the highest rated players in the league (Darwin Ursal and Matthew Parsons) produced a suitably tense and gripping battle.

On board 1 Matthew Parsons and Darwin Ursal were locked in an epic struggle. These are two of the biggest beasts in the Calderdale League and their encounter was suitably hard fought and tense. Matthew took no chances and essayed his favorite London System and Darwin did his best to take the game down an offbeat path in the face of Matthew’s comprehensive understanding of all the key Black responses. Ultimately, both players burned significant amounts of time with the position on the board remaining tense. Finally, Darwin either made a mistake or took a very risky decision and both gave up a pawn and damaged his structure at the same time in the hopes of activating his pieces. With only a handful of seconds left on their clocks to reach time control both players overlooked some tactical points that they would normally have spotted and when they reached the haven of move 36, with material and chances even, they immediately agreed a draw. All the kibitzers breathed a sigh of relief and then pointed out both the player’s zeitnot oversights. Don’t they always!

This just left board 4 to finish with the match all square. In contrast to his Captain on board 5, John had chosen to return to an offbeat old favorite of his (1…a6) rather than play the Pirc which has recently appeared more frequently in his repertoire. This time it was Pete who took the game off down an interesting avenue early on as he won a pawn but at the cost of allowing John to activate his pieces and especially his queen’s bishop on h1-a8 diagonal. Soon Pete had to give the pawn back though and as the queens came off the board the tables were turned as Pete got a very active position in exchange for two pawns.

It turned out that the second pawn John grabbed was poisoned and, as a result, Pete was able to trap the remaining Black knight. In the final phase of the game, as both players started to get into time trouble the material on the board was two bishops and two pawns for White versus one bishop and five pawns for Black. Pete’s bishop pair were dominant though and by the time the players had scraped through to time control John only had one extra pawn and it was unable to progress up the board. The only question that now remained was whether Pete could find the right method to win and avoid any drawing tricks john might have in the time he had remaining.

Slowly, agonizingly slowly for the involved kibitzers, Pete edged his way towards victory until, when both players were down to their last few minutes John shook the dice for a final time as he swapped off his bishop for Pete’s last pawn and asked his opponent if he knew how to check mate with the bishop pair and a king. With only a couple of minutes on your clock and the match result in the balance this is quite a tall order but, finally, Pete did manage it. His relieved and happy team mates congratulated him as Hebden secured a critical victory.

Here are the individual results for the match. The annotated games can be found at the foot of this post in the game viewer. There are some good ones this week to be sure!

6 Responses to “Stormy night at Halifax”