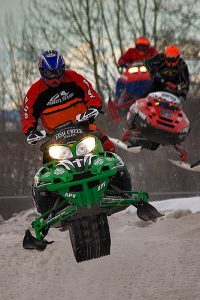 A suitably snow-related race for the seasonal conditions! Hebden Bridge ‘A’ and Golden Lion are the leaders in League 1 at the moment with little to choose between them. Photo used under Creative Commons terms and sourced from Eric Teela’s Flickr photo stream.

It’s been over a month since our last report on the Calderdale League. We didn’t report at all on the seventh round of League 1 which took place just before Christmas. The main reason for this was that, unfortunately, neither Hebden Bridge team contested their scheduled matches. Hebden Bridge ‘B’ were unable to field a team and defaulted their match with Belgrave ‘A’. Meanwhile, Hebden Bridge ‘A’ were ready to play against Halifax ‘B’ but the visitors then requested a postponement. This match will now take place next Monday the 22nd.

Meanwhile, Golden Lion were reinstating their title credentials by pipping League leaders Huddersfield ‘A’ away in a very tense affair. Dave Shapland won early on board 5 against Dave Tooley to give the visitors the lead but the next two games to finish were drawn and this left Roger Keely against Pete Mulleady and Leo Keely against Phil Cook. Both looked very close and one wouldn’t have betted against two draws at this point. However, as clock pressure started to make itself felt towards the end of the evening the games fell decisively, one to each side, as Roger blundered against Pete while Leo picked Phil’s pocket in an endgame it appeared he had no way of winning. So, it ended 2 – 3 and this result ensured Golden Lion were back on top of the League at Christmas

The second half of the season got underway on Monday night and, as is traditional, featured the return derby matches. In this instance for Hebden Bridge and Halifax.

Hebden Bridge ‘A’ beat their ‘B’ team comfortably (4-1) in September but they have struggled against them in previous years. Would they struggle this time? As you would expect the line ups meant that, on paper, Hebden Bridge ‘A’ had a comfortable rating advantage on every board. With captain Pete Leonard on board 1 followed by John Allan, Richard Bedford, Neil Suttie and Sam Swain all the players were rated over 150. Martin Syrett’s ‘B’ team however was packed with seasoned campaigners all capable of causing an upset on their day. Andy Leatherbarrow was on board 1, Martin on 2 and then new man Paul Gledhill who is having an excellent debut season, John Kerrane and Neil Bamford.

In the end the ‘B’ team were unable to land a telling blow on their opponents. Paul, John and Neil all managed highly creditable draws against their opponents but on the top two boards Pete and John both won to ensure Hebden ‘A’ kept up their title chase.

Halifax ‘A’ lost to their ‘B’ team colleagues in the first match of the season but took their revenge this time around as they won their match comfortably and in exactly the same fashion as Hebden Bridge ‘A’ by drawing on the lower boards and winning the top two boards with Bill Somerset and Richard Porter over turning Peter Hughes and Scott Gornall respectively. This restored some order to the two Halifax teams’ league positions too with the ‘A’ team moving 3 points clear of their colleagues, who have that match against Hebden ‘A’ in hand.

Having agreed to reverse the venue for the first fixture of the season, Huddersfield ‘A’ were due to host Brighouse at home on Wednesday night but this match was postponed when the wintery weather caused chaos on the roads in the area .

That just leaves us to cover league leaders Golden Lion who fought their way to victory at home in a very tough match against Belgrave ‘A’. The 3½ – 1½ score line does not reflect the close nature of the encounter. Golden Lion fell behind early in the evening as Dave Colledge defused David Innes’ attacking intentions taking the gambit materials and keeping them.

Next to finish was board 2 where Phil Cook and John Morgan drew their game. Now, down one point with three boards left to finish it seemed the home team were up against it but they recovered and gained the lead courtesy of two marvellous games. First of all, on board 1, Martyn Hamer initiated a devastating attack on Ian Hunter’s king to sweep him aside. This was followed by an admirable technical victory by Andrew Clarkson over Dave Patrick. The rook and minor piece ending appeared pretty level at first glance but Andrew used his king to boldly march up the board not once, but twice with decisive effect.

Now Golden Lion had the lead but, in the final game to finish Karim Khan had the better of Dave Shapland. That was, seemingly, until he realised he had to win the game to tie the match. Both players had only a few minutes left to complete a knight and pawns end game where Karim had four pawns to Dave’s two. Under normal circumstance Karim would have converted easily but, under the pressure of the clock and needing a win he went astray, lost his knight and then his pawns meaning Dave had swindled his first win from this opponent. Historically it’s been the other way around!

All this leaves Golden Lion still at the top on 14 points from eight matches. Hebden ‘A’ are two points behind but have that match against Halifax ‘B’ in hand next week. If they can win that 5 – 0 they’ll be just half a board point behind Golden Lion. Huddersfield ‘A’ are still in third on 9 points but they now have two postponed matches to play so they are still right in the hunt.

At the other end of the table Brighouse, without a point, look doomed. Halifax ‘B’ are on 4 points, Hebden ‘B’ have 5 and then Halifax ‘A’ and Belgrave ‘A’ have 7 each. Theoretically, any of these last four could occupy the second relegation spot.

In the game viewer below are a selection of games from this week and the round played before Christmas. Our thanks as always to those who have sent in their games for publication. These columns would be greatly diminished without them.

8 Responses to “Leaders keep up the pace”