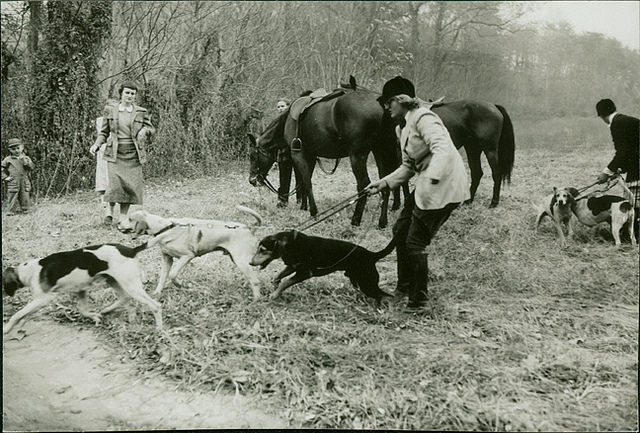 Let loose the hounds! The hunt is on to catch co-leaders Phil Cook and Dave Shapland in the Calderdale Individual Championship. This image is used under Creative Commons terms and sourced from the Cochran Library’s Flickr photostream

The third round of five in the Calderdale Individual Championship took place on Monday night at the Trades Club. It’s at this stage of the competition, where it passes the half way mark, that a ‘sharp end’ of the standings emerges.

Before we get to the action though let us first remark that 34 players took part in round 3. That’s a pretty high proportion of the original 38 starters. In recent years there has been an unfortunate trend towards a significant number of withdrawals and so it is a most welcome development to see so many players sticking with it. If 34 players also sit down to play round 5 that would be fantastic.

At the start of round 3 there were four players on 2 points and so they were drawn against each other. On board 1 the fourth seed, Phil Cook (Todmorden) took on Nick Sykes (Hebden Bridge) with White and on board 2 Dave Shapland (Hebden Bridge) played another Todmorden player Richard Bedford.

Andy took a half point bye in this round which left an even number of players on 1½ battling it out to maintain the chase on the leaders. It also meant that two of the big-hitters would have to face each other and the draw pitched club colleagues John Allan and Matthew Parsons against one another in what was undoubtedly the juiciest match up of the round. These two played on board 3 and below them Greg played John Lavan, Mitchell had White against Scott and Mike had White against Ian.

At the other end of the draw a number of the juniors were now drawn against each other which meant that the battle for the junior prize was well and truly on. Martha Leggett played Owen Buchan, Luca Curry faced Toby Dodd and Juliet Hadari played Gwilem Hughes.

On the top two boards the opening phase took very different turns. On board 1 Nick had spent some time considering how best to respond to Phil’s habitual English Opening (1.c4) only for Phil to confound him by playing a different move order (1.Nf3 and 2.c4) which ruled out Nick’s preparation and threw him back on his own resources at once. Somewhat dispirited, Nick drifted into a difficult position straight out of the opening and then capitulated when Phil found some brisk tactics to bring the game to a swift conclusion on move 22. Phil therefore became the first player to reach 3 out of 3.

On board 2 Dave and Richard reached a position in the Two Knights Defence that both had foreseen and considered in their preparations. Richard opted for a very solid set up where he grabbed an extra pawn but accepted some structural weaknesses in exchange. Dave didn’t play the opening phase at all well and, like Nick, drifted into an inferior position. Fortunately for him Richard had arrived 15 minutes late for the start of the game and so, when Dave later sought to complicate the position in order to change the dynamics, Richard began to get into time trouble.

Dave then threw caution to the wind on move 22 and sacrificed a second pawn as well as exposing his king in order to try and build up further pressure on Black’s vulnerable f7 square. Richard defended accurately until, on move 30, he blundered and quick as a flash Dave broke through. A shame for Richard who played very well against his higher rated opponent up until that moment.

This means that Dave and Phil will face each other on the 6th of February in round 4 to see if one of them can stay perfect and get to four points.

Probably the highest quality game of the day was seen on board 3 where Matthew slowly ground down John Alllan with Black to maintain his hops of regaining the title. In a Four Knights Game, Matthew created a structural imbalance on the queen’s side by creating doubled c-pawns for John. Then he quickly opened the a-file and took control of it. John sought the haven of simplification but Matthew maintained a marginal edge due to John’s, now isolated, doubled c-pawns. Finally as they entered a rook and pawns ending, Matthew won one of the White c-pawns, swapped of the rook and accurately finished off the king asnd pawn ending for a very nice positional win against a strong opponent.

On boards 4, 5 and 6 the higher rated players also did what was expected of them. Greg kept a small advantage out of the opening against John Lavan who was never able to equalise and eventually capitulated. Mitchell found a nice tactic against Scott to win a piece as early as move 15. He lost two (and later three) pawns in the process but the material advantage was sufficient even though it took him a while to convert it. Finally, Ian had to grind out a win in a double bishop and pawns ending against Mike who put up serious resistance. This game outlasted all the other by some margin and it seemed at one point like Mike would hold his opponent but it was an illusion as Ian eventually broek through to mate hi opponent.

In round 4 Mitchell will now likely play Matthew with Black while Ian will have White against Greg. These should be epic encounters with only two of the four maintaining winning chances after that round.

Further down the draw, two of the higher rated players who had lost in the first round continued their resurgence to get to 2 out of 3. Richard Porter won smoothly against his Halifax club colleague Vivienne Webster and Pete Leonard inflicted a second victory of the season with his Alekhine’s Defence over Neil Bamford who certainly did not lack ambition in his approach but ultimately fell victim to an opening trap.

Martin Syrett (Hebden Bridge), Pete Moss (Halifax) and Steve Harrington (Halifax) also advanced to two points with wins against a trio of Belgrave players in the form of Adrian Dawson, John Brooke and Angel Gonzalez respectively. Pete’s performance in particular should be applauded as he beat his second higher rated opponent of the competition.

So too on board 12 did Halifax’s Barry Wadsworth who took down Robert Sutcliffe (Huddersfield) to progress on to 2 points himself. This leaves some experienced players in one point. They’ll be eager to get back to 50% in the next round against potentially weaker opponents.

Finally we should tell the story of the juniors. Alfie Dermo (Hebden Bridge) took on an adult when he was re-paired to play Daniel Rivron (Halifax). Alfie did his best but Daniel was solid and secure and outplayed his young opponent. The other junior vs. senior clash also went the way of experience as Bill Joyce (Todmorden) overcame Joel Hadari (Hebden Bridge) without too much trouble.

The all junior clashes produced the mix bag of quality and competitiveness one might expect. At one end of the scale Juliet Hadari lost what was probably the shortest game in Calderdale Individual Championship history against Gwilem Hughes. At the other end of the scale Luca Curry finally beat Toby Dodd after a much more interesting and evenly matched struggle.  Owen Buchan was the other winner over Martha Leggett.

Full results are listed below along with the standings after round 3 and some of the games in the viewer at the end of the post. I’m having some problems with the regular viewer so have had to use a different one for the moment. Hopefully it should not spoil the experience too much. Round 4 is on the 6th of February and should produce some fascinating and hard fought matches.

2 Responses to “Calderdale Individual Championship R3: The hunt is on”