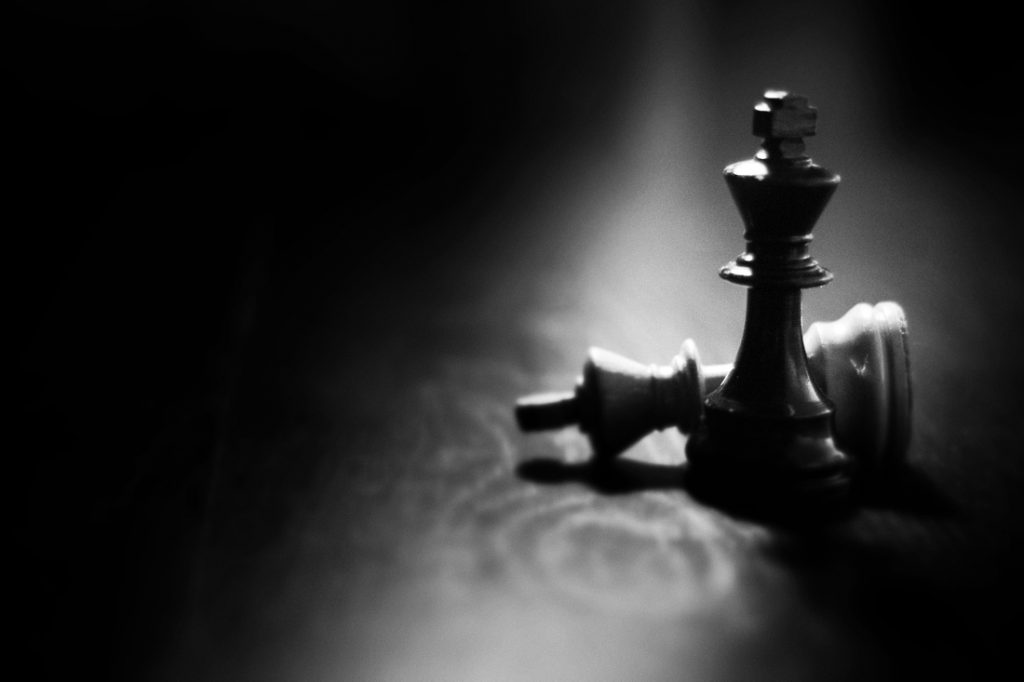 The last man standing this year is Phil Cook of Todmorden. But there is still one final round to go. Can he remain undefeated to become the new champion of Calderdale?

Last Monday night saw an enthralling and exciting fourth round of the Calderdale Individual Chess Championship unfold at the Trades Club. Previous rounds and seen a number of surprising results which had led to some of the top seeds falling half a point behind the pace setters, fourth seed Phil Cook (Todmorden) and eighth seed Dave Shapland (Hebden Bridge) who started round four as the only two players on a perfect 3/3.

With these two destined to face each other on the top board it was vital that those trailing just behind on 2½ succeeded in winning so they could keep pace or possibly catch up with the two leaders should they draw. That would be no easy task for now the best players in the competition would start to get drawn against each other. On board two, top seed and triple champion from 2013-2015, Matthew Parsons (Hebden Bridge) would take on fifth seed Ian Hunter (Belgrave) and on board three reigning champion Greg Eagleton (Huddersfield) would play Pete Leonard (Hebden Bridge) who was the unlucky player on two who was destined to ‘float up’ when Mitchell Burke (who was also on 2½) withdrew from the competition.

But whilst these battles on the top three boards could prove decisive in shaping the destination of the 2016-17 title, there were some equally juicy looking match ups just below them. On board 4 Richard Porter (Halifax) took on Martin Syrett (Hebden Bridge) and then club colleagues Nick Sykes and Andy Leatherbarrow (both Hebden Bridge) faced off before the last two players on 2 points Richard Bedford (Todmorden) and Pete Moss (Halifax) also looked like an interesting battle.

Very often on these important and tense occasions, strong players can tend to cancel each other out and take a ‘safety first’ approach to their games. However, on this occasion the circumstances of the tournament situation really encouraged the players to take some risks and play for the full point. This resulted in some highly interesting and full-blooded contests.

On board 1, Dave Shapland, playing White took precautions to try and ensure he kept winning chances in his game as he knew that he would have to Black in the final round against a top player and felt he needed the largest points buffer he could muster to have any hope of winning the competition. For the third game in a row his opponent played 1…Nc6 against his 1.e4 opening move. In the two previous encounters he had chosen to transpose into a solid variation of the Two Knight Defence and had got nothing at all from the opening phase even though he’d scored a point and a half from them. This time, he opted for the Scotch Game which had the added benefit of taking his opponent by surprise.

If Dave had intended to keep the tension in the game with his opening choice then he certainly succeeded in doing that. Phil sensibly opted for a less well known variation beginning with 6…Qg6!? Now both players were already in unfamiliar territory and unsurprisingly, started to burn through their allocated time as a result. Dave fanned the flames further when he castled queen’s side on move 14 and the game became extremely sharp and complicated with all three results seemingly possible.

Ultimately, the player’s time shortage before the time control at move 36 proved decisive. Dave made a series of moves that didn’t really improve his position and got himself into hot water as he lost a pawn. Soon after, Phil returned the inaccuracy when he offered an exchange of queens which should have enabled Dave to equalise again. However, he missed his chance and when the time control did arrive he found himself in serious difficulties.

Dave battled on but his position became increasingly futile and his queen’s side pawns fell giving Phil a passed a-pawn. A final tactical twist that Phil had overlooked proved not to be a problem as, in exchange for a rook and knight, Phil forced home his a-pawn and then drove the White king to c5 to win the game.

With board 1 producing a result it was now even more important that the chasing pack won their games in order to keep up with Phil and give themselves a chance in the final round.

On board 2 Matthew played his habitual London System which was well met with some solid and sensible play by Ian. The game looked very much in the balance although Matthew was placing his confidence in a good knight versus bad bishop endgame scenario. Unfortunately for him, that scenario never appeared on the board for he got side-tracked and misjudged a key position on move 18 that left the game dead level with both sets of rooks and queens still on the board.

Matthew took a risk to unbalance the play by sacrificing both his rooks for Ian’s queen in the hopes that his opponent might be more likely to make an error. That didn’t happen and, if anything, it was Ian who was pressing for a win and seemed to come very close to getting one. However, Matthew just had everything under control and, despite walking the tightrope to try and win, in the end he had to settle for a draw as Ian couldn’t make progress and Matthew was able to repeat the position.

On board 3 events had also conspired in Phil Cook’s favour. Reigning champion Greg had the Black pieces against Pete Leonard and seemed to achieve a perfectly playable position in a Closed Sicilian. That is, until he overlooked a tactical nuance that would have meant he would be three pieces for a rook down. He decided not to continue and resigned as early as move 23! Kudos to Pete for taking his chance and advancing to 3 points himself.

All of this now meant that Phil was out in front on 4 points with Matthew, Ian, Dave and Pete all on 3. Would any of the others on 2 be able to join the chasing pack?

On board 4 Martin Syrett sprung a second surprise of the evening by beating Richard Porter with the Black pieces. In a complicated Kings Indian Defence Martin succeeded in launching a strong king’s side attack whilst keeping his opponent’s counter play on the other side of the board to a minimum. After the time control Richard finally cracked under pressure and Martin broke through in the centre with a discovered check tactic and successfully mopped up for an excellent win.

Nick Sykes developed a very strong attack against Andy Leatherbarrow on board 5 out of a topical variation of the Two Knights Defence with 4.d3. The position played and evolved very much like a Closed Spanish where White builds up an attack on the king’s side and Black tries for counter play in the centre and on the queen’s side. Nick may well have missed some opportunities to win the full point but Andy also defended actively and resourcefully and he held on for a draw in what was about to become a same-coloured bishops and pawns ending where he was a pawn down but Nick was going to struggle to break through.

On board 6 Richard Bedford succeeded in gaining a decisive positional advantage straight out of the opening (another King’s Indian) against Pete Moss and then proceeded to offer his opponent not the slightest glimmer of counter play as he ensured that he would be the sixth player to reach 3 points.

Also in amongst this mid-section of the boards was a tremendous fighting draw that was the last game of the night to finish was battled out between Daniel Rivron (Halifax) and John Lavan (Hebden Bridge). The game finished with John’s king on h8 holding up passed White pawn on h7. White’s extra bishop was of no use to him because it was the wrong colour to drive the Black king away and therefore stalemate was inevitable.

The lower boards also saw some very competitive games especially between some of the junior contestants who were starting to fight it out between themselves for the junior prize. Before we get to that though, there were two more ‘all adult’ clashes to mention. In the first Adrian Dawson (Belgrave) played a nice game to overcome his higher rated opponent, Robert Sutcliffe (Huddersfield), and secure his second win of the competition. Neil Bamford (Hebden Bridge) also won against Bill Joyce (Todmorden) to also reach 50%.

Now to the juniors. Martha Leggett took a full point bye by default (her second of the competition unfortunately) to move onto two point. That makes her the highest scoring junior but she is being pursued by Luca Curry (who took a half point bye in round 4), Owen Buchan (who we already saw lost to Scott Gornall) and Toby Dodd (who won a long and protracted battle with Joel Hadari) who all have 1½.

Gwilem Hughes lost to Vivenne Webster (Halifax)  and we should also mention that, on board 15, Joel’s sister Juliet, won her game against Alfie Dermo to score her first win of the competition.

Here then is confirmation of the individual results from round 4:

The standings with one round remaining are therefore as follows:

13 of the 15 games played in round 4 can be found in the game viewer at the end of this post.

All that leaves us to consider are the permutations for round 5. It will wither be very simple, or very complicated.

Phil Cook should have draw odds with White against Matthew Parsons in the final round. A long as he doesn’t lose he will be champion.

If Phil does lose though all hell breaks lose as in that scenario, he and Matthew would both be on 4 points along with up to three other players. The tie break would then come into force. On that basis we have asked the competition controller, John Kerrane, to provide us with the tie-break rules for the competition so that everyone can be clear in advance how this would work in that eventuality.

In the event of players achieving the same scores, tie-breaks will be applied in the following order:

This is roughly equivalent to the recommended FIDE system, also recommended by the ECF, modified to allow for a low number of rounds.

In the event of more than two players achieving the same score, the tie-break will proceed directly to step 2 above.

Note: For the purposes of a tie-break only, unplayed games of players who have withdrawn before the end of the tournament will be counted as draws in section 3 above.

On this basis the following assumptions can be made:

Comments and feedback on the tie-break rules and the permutations are welcome as always.