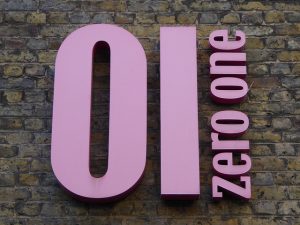 The fashionable score in round 1 of the Calderdale Individual Championship where there were no draws this year. Photo used under Creative Commons terms and sourced from Duncan C’s Flickr photostream

Last Monday night saw round 1 of the Calderdale Individual Championship for 2017-18 take place at the Trades Club. The reigning champion, Phil Cook was back to defend his crown, as were three of the other four players who finished on the same score (4) as Phil last season. Dave Shapland, Richard Bedford and Matthew Parsons were all on the entry list. Entries were slightly down on the 38 participants of last season with 32 players registered – six of whom took a half point bye for round 1.

The field is also a shade weaker this season as last year there were nine players rated over 150 with six of these were rated above 170. In this year’s edition there are eight rated above 150 and three over 170. One constant factor however is the strong proportion of junior entries which highlights the main benefit of playing the event at the Trades Club. Nine of the entries this year are members of the Hebden Bridge Junior club and this competition provides them all with an excellent opportunity to play against adults from across both Calderdale Leagues.

Of course with one section and a huge range in abilities from the top to the bottom of the draw the first round is always likely to see it’s fair share of flat-track bullying. Last season’s first round was exceptional in that there were a serious number of upsets with lower rated players drawing (including draws against the top two seeds) and even winning two games. This time around normal order was restored with all the results going the way of the favorites and no drawn games. It was zeros and ones all the way down the draw.

The common theme in many of the games was tactics involving the loss of the queen – and of course, these games ended pretty swiftly. Nick Sykes is on great form at the moment and he won Luca Curry’s queen with a bishop fork on move 16. Luca resigned three moves later. On the board next door Martin Syrett was up to his old tricks with the Kings Gambit and he succeeded in pulling off a family knight fork of king, queen and rook against Bill Joyce to win on move 18. Interestingly, Paul Gledhill pulled off a mirror image of Martin’s family fork against Joel Hadari on board 13. The main difference in the two games being that, as opposed to resigning on the spot like Bill, Joel toiled on for 20 more moves and forced Paul to mate him.

By way of a variation on the theme, Dave Shapland thought he’d found a combination to win Neil Bamford’s queen for two pieces on board 3. It turned out that he’d miscalculated however and in fact Neil won a rook, knight and bishop for his queen and a pawn. This is altogether a different assessment and, when the dust had settled, it was clear that Neil had a mathematically winning advantage. But of course it’s never that easy to win a game like this with such unusual material imbalances and Neil wasn’t able to find the right method to consolidate and activate his pieces. Dave then laid a nasty trap and Neil fell into it meaning that this game too was also over early in the evening and in under 30 moves.

Elsewhere in the room the lower rated players put up spirited resistance without ever really looking like they were going to cause an upset. The battle of the Richards (Bottomley and Porter) on board 5, went into an endgame before Richard Bottomley fell to a nasty bishop skewer of his rook to his king at the end of an exchange sequence.
On board 6 newcomer to Calderdale chess, Mark Turu, was taken deep into the end game by Toby Dodd who defended resiliently despite being a pawn down for much of the game. Mark was forced to grind out the result as he carefully traded off pieces to reach a five pawns versus four pawns and same coloured bishops ending. Finally, the bishops came off too and Mark’s passed a-pawn diverted the Black king to allow White’s to hoover up Blacks remaining pawns. A patient victory for Mark and staunch resistance from Toby who will surely be served well by this type of form if he plays like this in his league matches too.

Young Gwilym Hughes also forced his opponent, Mike Barnett into a drawn-out affair that finished in a win for Mike on move 55. In this game Gwilym paid the price for having too many weak pawns and Mike efficiently took everything that he was offered and gave nothing in return until his own pawns advanced relentlessly on White’s king right across the board like space invaders.

Juliet Hadari (against Scott Gornall), Martha Leggett (against Vivienne Webster) and Alfie Dermo (against Angel Gonzales) all saw the junior participants put up spirited resistance but ultimately ended in failure.

This just leaves us with three of the top four boards to report on. First of all on board 4 Pete Leonard seemed to be romping to an early win against J-P.Ellis but, just at the moment when a check mate looked inevitable, J-P found a way to give up an exchange and a pawn to stave off Pete’s attack and he was forced instead to consolidate his advantage and win more slowly. Sure enough, the engines show there were some swifter paths to victory, but, having been surprised in the opening round of this tournament last season Pete, quite rightly, chose a risk-free route to accumulate the full point.

The reigning champion, Phil, was up against Steve Harrington on board 2. He had the benefit of the White pieces too but again, the underdog resisted stubbornly. Not only that, but to his great credit, Steve also tried to play actively. Bit by bit, Phil accumulated one positional advantage after another and squeezed his opponent on the queen’s side of the board where the half open b-file was proving to be White’s avenue into the Black position. Eventually, on move 26, Steve overlooked, or was forced to accept the loss of a pawn and his position simply collapsed after that and he resigned just as he was about to go three pawns down into a same-coloured bishops end game.

Undoubtedly the game of the round was on board 1 however as previous winner and number 1 seed, Matthew Parsons took on Chris Edwards in a struggle which became an epic encounter and lasted until the very end of the evening’s play. Last season Matthew had been held to a draw in the first round with the Black pieces but he didn’t alter his approach which was to play solidly and aim to outplay his opponent in the middle and endgame.

Chris chose the Panov-Botvinnik Attack of the Caro-Kan as the battleground for the game but he mis-handled the opening somewhat and lost a pawn. That said, Matthew’s extra pawn was both passed and isolated on the d-file so his margin for error as he exchanged off into a double rook endgame was slim. Chris hunkered down to his task and Matthew then went slightly astray himself as he opted to activate his king when, as he says himself in the game notes, he would have done better to first develop his second rook. By move 22 he admitted that he was not really any better and would ‘have to win the position again’.

Chris’s more active rook, doubled on the d-file, were the key to his defensive chances but then it seems he over-reached himself and started playing for a win when it would have been more prudent to harass the White king with his rooks and ask Matthew to find a winning method. Finally, Matthew activated his king’s rook and, although he was compelled to give back his extra pawn, the players were now in a time scramble and it was Chris who eventually cracked under pressure to hand Matthew a very hard-earned win.

Here is a full list of all the results:

All but one of the games from round 1 can be found in the game viewer below.