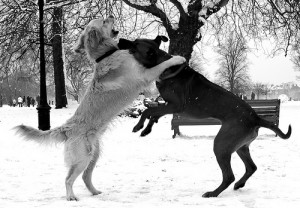 Even more so than the last two seasons, this year’s league one title race is a vicious dog fight with five teams right in contention. This image is used under Creative Commons terms and sourced from Greything’s Flickr photostream

The savagely contested, too-close-to-call, league 1 season bowls on in an increasingly disorderly fashion. By this stage of the season the front runners have usually established themselves and asserted their authority. Not this year. It‘s brutal dog eat dog scrap to the death and there are still five teams at the top separated by no more than three points.

Last week’s “Magic Monday” encounters pitted the top four teams against one another as the league leaders, Todmorden ‘A’ hosted Halifax ‘A’ and arch-enemies Hebden Bridge’A’ and Huddersfield faced off at the Trades Club. The casual bystanders watched and rubbed their hands with glee at the prospect of two more titanic battles between the league’s heavy-weights.

Todmorden were top of the league on board count before the night started and had the home advantage against Halifax ‘A’ who where struck down from their share of top-spot in the last round by Hebden Bridge. The two teams looked evenly matched on paper (both sporting line-ups averaging a mega 167!) but the statistics suggested that Halifax were facing an up-hill struggle. Todmorden had played three home fixtures before this one so far and they hadn’t lost a single game!

Halifax’s players out-graded their opponents on the top three boards and Todmorden’s took precedent on the bottom two. In the end it was Todmorden’s unbeaten home run that prevailed as Andrew Clarkson continued his excellent run of form with a win over Bill Somerset on board 3 and Alastair Wright saw off Sam Scurfield on board 4 to seal another impressive victory for Tod and secure their place at the top of the table for another week.

Hebden Bridge ‘A’ have the lowest average rating of the top five (just 156) but somehow they continue to collectively be worth more than the sum of their parts having beaten both Todmorden at home and Halifax away in their last two fixtures. Huddersfield however have always been something of a bÃªte noire for Hebden and last year was most unusual in that they two sides traded away wins (Hebden’s first victory over Huddersfield for years) in the league on their way to finishing first and second.

As expected, Huddersfield Captain Robert Sutcliffe had inserted some serious muscle into his team following their truly shocking home defeat to Brighouse in the previous round. Their line up averaged a stellar 168! An uphill battle was in prospect once again for the Hebden team but, as always, they perform best when they are up against the odds.

The night started out wonderfully for Hebden. First of all Matthew Parsons secured a swift and painless draw with Mitchell Burke on board 1. These two players know each other’s games inside out and back to front and so it was no surprise to see that neither of them took any risks playing for a win. Matthew also said afterwards that his exertions in the previous day’s Haiyan Blitz tournament in Halifax, where he finished in an excellent share of third place, had left him feeling a little low on energy.

Next, Dave Shapland secured a swift and decisive victory in just 23 moves against “The Adamantine” Richard Boylan. Richard is a tough nut to crack and deployed a typically solid system, the Rubenstein Variation of the French Defence, but somewhere along the line he played too slowly and Dave simply developed all his pieces and then launched an attack in the centre. Inevitably there was a flaw in the winning combination but it was tough to find and although Richard still found a method for testing Dave’s nerve, he found that he had been out-calculated and Dave’s sacrifice of the exchange and a rook was forcing checkmate.

The momentum was with Hebden and it seemed that they would go “over the top” with a win on board two where Pete Leonard had survived an early assault of his Bishop’s Opening by Dave Keddie and then completely turned the tables with a direct attack on the Black king. Pete correctly sacrificed a rook to break open the pawn carapace in front of Dave’s monarch but then, with victory in sight, he chose a line that drew by repetition when check mate looked on. As the post-mortem uncovered several methods for White to complete his romp to glory Pete was remorseful but he had no cause to be for he had drawn against another player rated much higher than himself and it was his superb victory at Halifax in the previous round that had secured Hebden’s triumph.

Sadly, on this occasion, the momentum had been stopped with this result and Huddersfield’s tumescent glow returned as both Greg Eagleton on board 3 and Dave Tooley on board 4 secured solid advantages of a single pawn against Nick Sykes and Andy Leatherbarrow respectively. Both Hebden players had also taken part in the Sunday blitz contest and so perhaps they too were suffering some ill-effects. If they were they didn’t show it because both Sykes and Leatherbarrow knuckled down to some gritty defensive work as they fought tooth and nail for the draw Hebden needed to tie the match. They held out almost to the very end of the evening, when, just as it appeared the Huddersfield players might have to brave serious clock crises to get their wins both Hebden players capitulated under massive pressure. Huddersfield had pipped them at the post once again.

“What about the fifth team in the dog fight?” I hear you cry. Well, let us not forget that Courier ‘A’ are right in the championship battle having beaten Hebden at the Trades Club earlier in the season. They started the night 2 points behind Hebden and Todmorden and they had a wonderful chance to gain ground on the four above them as they were the only members of the elite group not to be playing another. Instead they hosted the tortured Hebden Bridge ‘B’ side who, having been pressed back into action after defaulting their first three matches are now struggling to get any traction in the table at all.

In fairness Courier was never going to be the kind of place where they could expect to go with any great optimism of securing their first points of the season. At the end of the night the results was predictably destructive as only John Kerrane (who is having a fine season) on board 4 was able to hold out against the superior Courier squad.

All of this means that the top of the table is as tight as ever before the last fixtures of the first half of the season are played. Todmorden are top by a single point over Huddersfield but they must travel to Huddersfield on December the 18th for what ought to be a mouth-watering encounter for anyone able to get along and witness it first hand.

A further point behind Huddersfield come Courier ‘A’ and Hebden Bridge ‘A’ (Courier are third on board count) and then one more point behind are Halifax. Halifax host Courier in the pre-Christmas fixture and really need to win that match to haul themselves back into content. Can they bounce back from two successive defeats? They are certainly strong enough and capable enough to do so.

Hebden meanwhile have a golden opportunity to gain ground on at least two of the other four as they face Todmorden ‘B’ away. Tod’s second string will be no push overs but Hebden ought to be able to defeat them to maintain their pursuit of a third successive title.

At the other end of the table Hebden Bridge ‘B’ may yet find a way to dig themselves out of the basement but they absolutely must beat Brighouse at home in their last match of 2013 if they are to stand any chance of staging an unlikely escape.

T0day sees round 2 of the Calderdale Individual Championship take place at the Trades Club and wed should see some very competitive games as the top half of the draw renew their acquaintance with one another.