The Halloween Week fixtures saw an appropriate variety of scares, frights and thrills as all four of Hebden Bridge chess club’s teams ventured into the night on Monday. 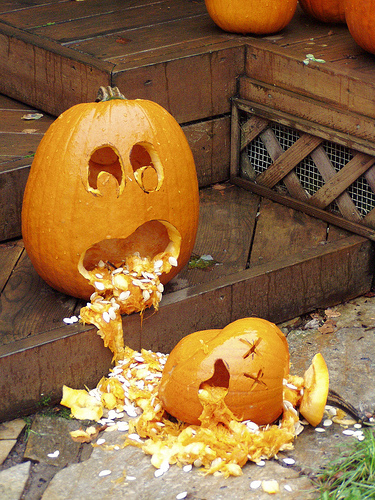 There was no small amount of ‘chewing up and spitting out’ in the Halloween fixtures at the Trades Club on Monday night. This image is used under Creative Commons licencing and is sourced from Lacey_and_Cielle’s Flickr photostream

It was the turn of the League 2 teams to take to the battlefield and the current leaders of the division are Hebden Bridge ‘B’. It seemed that they would have the most straightforward of tasks to maintain their 100% record against Danny Crampton’s ‘D’ team. However, like all good ghost stories, things were not as they appeared to be and there were a significant number of twists and turns as well as an unexpected outcome.

We should begin by saying that ‘B’ team Captain, Martin Syrett, was forced into action without two of his normal first choice players. Hebden Bridge ‘A’ were engaged in a mortal struggle with Todmorden ‘A’ in their Team Knockout Semi-Final replay and that meant that Dave Shapland and Josh Blinkhorn were not available for the ‘B’ team. Martin therefore recruited the family Leatherbarrow in order to deploy a full line up. Dad (Andy) played on board 1 whilst his son (Spike) and daughter (Hephzi) played on boards 4 and 5 respectively. This line up gave the whole fixture a “junior” feel because the ‘D’ team themselves sported no less than four current or recent members of the Hebden Bridge Junior club.

The match started disastrously, if not completely unexpectedly, as first Hephzi and then Spike succumbed to Dylan Leggett and Danny Crampton respectively. 2 — 0 down with three to play was not great odds for the ‘B’ team but at least they could rely on their seasoned campaigners on the top three boards to bring home the bacon. Or could they? It wasn’t straightforward at all.

First of all, on board 2, Dave Sugden heaped suitably cruel and grotesque tortures upon poor Craig Sharpe who was simply swept aside. The recovery had begun. This left two very interesting struggles to be decided. On board 1 Andy Leatherbarrow faced the talented Robert Murray. Robert is currently the highest rated player in the club (although he hasn’t yet faced many of the strongest players in the league in order to test this rating) and he is very solid and tough to break down. Andy managed to win a pawn before the pair reached a same coloured bishops and pawn ending which, try as he might, Andy could not convert. A draw was agreed.

That result meant that the ‘D’ team had guaranteed a drawn match and could even pull off a victory if young Kyle Sharpe could hold off Captain Syrett. For a long time it seemed as if he would but Martin determinedly kept plugging away and trying to cause problems and eventually he wore Kyle down so that he at least preserved his sides unbeaten record.

Well done to the ‘D’ team for taking their senior colleagues to the brink! Here is the final match score card:

Whilst the ‘B’ team were being scared to half-to-death at the Trades Club the ‘C’ team had travelled to Lee Mount to take on Halifax ‘B’. The result was a humiliating rout as Halifax put on their scariest masks and went trick or treating on the hapless visitors. Only Terry Sullivan managed to save a total whitewash.

Ironically, this result further cemented Hebden ‘B’s grip on the league lead as their own ‘C’ team had been their closest rivals at the beginning of the evening. With this defeat they lost ground to Halifax ‘B’ who took the second promotion place from them. Halifax though are three points behind Hebden ‘B’ and they have the same number of points as both Todmorden ‘C’ and Hebden Bridge ‘C’. With Courier ‘B’ and Hebden ‘D’ just two points further back the battle for the second promotion place is really very tight indeed.

This just leaves me to report on the aforementioned Team Knockout Semi-Final replay. Hebden ‘A’ are the current title holders (they’ve actually won it for two years in succession) but they have had a very tough task in this year’s competition having had to play first Todmorden ‘B’, then Halifax ‘A’ and now Todmorden ‘A’. Back in September there was nothing to choose between the two sides as the draw at Todmorden.went right to the wire. This caused both teams a bit of a headache as it wasn’t easy to plan when a replay could be scheduled amongst all the league action.

On Monday night the two team Captains took precautions to ensure that there would definitely be a winner by the end of the evening. In the event of another drawn match it was agreed that the bottom board result would be discarded and the results from the remaining boards used to determine the winner. If by some chance all five games were drawn then a round of blitz games would be played to decide the fixture.

For much of the evening it seemed that there would be absolutely no need for such a tie-break to be utilised and Hebden Bridge (with Josh Blinkhorn deputising on board 5 in place of Pete Leonard) seemed to be doing very well indeed against a Todmorden side that was itself almost at full strength. With the time handicap system in place Josh gave away 28 minutes on his clock to Paul Edwards and got into trouble as Paul deployed his favourite, but slightly unorthodox, means of taking on the Spanish Defence. The game ended early on and the visitors had the lead.

On boards 3 and 4 Hebden Bridge had substantial time advantages and both Dave Shapland and Nick Sykes were rated 14 points below Andrew Clarksson and Rob Tokeley respectively. The two games were very different I their nature. Nick, playing White, faced an orthodox variation of the Queen’s Gambit in which he never seemed to be in anything other than total control. Rob got himself into terrible time difficulties as he sought in vain for an advantage but instead he got into more and more trouble and soon the Syko had dismembered him!

The board 3 match was anything but positional. Dave ventured an old favourite of his that has languished in his repertoire for some time now — the Sicilian Dragon. He fully expected an uncompromising response from Andrew but, instead of the Yugoslav Attack, Mr Clarkson opted for the Levenfish Variation. This can be a tricky line but Dave played the early stages of the game accurately and it didn’t appear that Andrew had gained much from the opening. Ambitiously, Andrew then decided to castle queen’s-side despite Dave having a half-open b-file to play on and the game suddenly developed very sharply indeed with both players hurling themselves at each others kings.

Meanwhile on board’s 1 and 2 Hebden’s top players were serenely acquiring significant advantages. On top board Matty Webb had the Black pieces against Martin Hamer and slowly built up an advantage which eventually turned out to be worth two pawns.  Matthew Parsons faced the uncomfortable prospect of playing against himself (Pete Mulleady plays the Sniper with the Black pieces — Matthews own choice) but he inexorably built up an advantage, then won a pawn and finally squeezed any chances of counterplay out of the position until Pete was forced to resign.

At about this time the whirlwind game on board 3 had also reached a conclusion. As Andrew advanced his king’s side pawns at Dave’s position Dave himself used piece play to target the White king. He offered a rook sacrifice on b2 that Andrew could not afford to accept and suddenly the momentum in the game seemed to have shifted. However, in the great complications that followed both players missed opportunities. Andrew gave up his queen for a rook, piece and pawns and Dave overlooked a nice finesse which would probably have secured a win before Andrew returned the favour in time trouble when his rooks and bishops were poised to deliver checkmate he instead went for a perpetual check and the game ended drawn.

Al this meant that the last game to finish was irrelevant to the match result as a win for Todmorden would only tie the match when the tie-break already favoured Hebden Bridge. Now Matty was blitzing to try and finish off the game. In any other circumstance he would probably have offered or forced a draw but with the with two extra pawns in a queen ending and no need to worry about the match outcome he pressed for a win, made an error and suddenly Martin had turned the tables for a win.

The final match score was a draw and looked like this:

After discounting the board 5 result and re-counting Hebden were the winners and now must try and find a way to schedule the final against their ‘B’ team before next year’s competition starts!

Finally, for those of you who read last weeks reports and found a rather sparse collection of games please note that I have updated the PGN file in that article and all games available have now been added. (See below)

2 Responses to “Fright Night at the Trades Club”