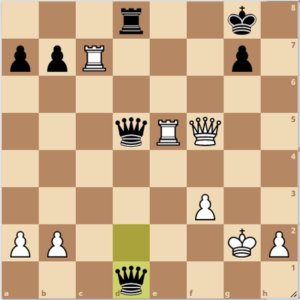 Shapland vs Toczek. Black has just made a second queen on d1 but White has the initiative. How would you proceed here? Answer in the report below.

Last week our two Hebden Bridge teams took part in round 3 of 4NCL Online season 3. With both teams having won both their matches so far it was always likely that the strength of the opposition would increase significantly for at least one of the two teams and  indeed, this was exactly what happened as the second team drew the second seeds in the division – Newport A. Hebden Bridge 1 meanwhile drew the 16th seeds, Celtic Tigers Cubs.

In preparation for a stern challenge Hebden had selected their strongest 8 players for these matches. Hebden Bridge 1 fielded Stavros Pantazopoulos for the first time and Greg Eagleton returned to the side along with Andrew Clarkson and Phil Cook who have played all three matches. Meanwhile Dave Shapland dropped down to play on board 1 for the second team and was joined by Dave Wedge, Pete Leonard and John Allan. The strategy behind this approach was to make the second team as strong as it possibly could be. Newport A are title contenders for Division 7 and, even in the event that Hebden 2 lost, if they could take some points from their opponents then this would increase Hebden 1’s chances of taking the title.

The opening system in Stavros’s game on board 1 against John White looked fairly exotic, but Stavros simply preserved a pleasant space advantage and eventually induced his opponent into making a mistake. The game ended after a tactical sequence that left Stavros a clear rook up.

On board 2, Phil Cook appeared to be playing in a highly provocative fashion with the Black pieces against Adam Cranston. The approach paid off however as his opponent struggled to find the right plan and the players ended up transposing into a variation of the Philidor’s Defence that was very comfortable for Black. Phil trapped his opponent’s bishop early in the middle game and the contest ended shortly after that.

It was a similar story on board 3 where Greg Eagleton had the White pieces against Kenneth Kwabiah. This one was a Classical Variation of the Dutch Defence and Greg set himself up solidly, keeping a careful eye on Black’s  weak spots. This game also ended after a tactical skirmish in which Greg out-calculated his opponent and won a piece with a second about to fall immediately after.

Andrew Clarkson found himself playing his favorite Pirc Defence on board 4 against Nadim Osseiran. This one was a little strange early on as Andrew seemed to be slightly distracted by some of his opponent’s sub-optimal moves in the opening phase of proceedings. Despite this, White seemed to have a perfectly acceptable position at several moments until Andrew broke out thematically with 19…f5. After this White’s position went down hill fairly rapidly and another burst of tactics concluded the game. 4-0 to Hebden 1.

Life was always going to be rather more difficult for the second team who were out rated by 250 points or more on every except board 4 (where the difference was just over 100 points) against Newport A. However, the Hebden quartet put up a strong and spirited showing in the early stages of the evening.

On board 3, Pete Leonard had a perfectly acceptable position out of the opening against Gareth Yeo but then fell into a trap that cost him a piece. The rest was torture. Meanwhile, Dave Wedge was battling hard with Black on board 2 against Adam Rakos. This game was another Pirc Defence and White didn’t appear to have much if any advantage until Dave was induced to expand on the king’s side somewhat in the style of a King’s Indian Defence. At first the approach looked like the right one, but then Adam managed to land a knight on an outpost on e6 and that made it hard for Dave to continue with his attack. He missed a brief opportunity at move 31 when he could have landed a protected passed pawn on f2 in exchange for a piece. The engines seem to think this is roughly equal.

The line Dave played instead looked very enticing indeed but, once the dust had settled he found himself in a rook versus knight and bishop ending with four pawns per side all on the king’s side. Probably there were some drawing chances but, as the clocks ticked down, finding the best defence became very difficult and eventually, Dave missed a skewer that left White up a knight and a pawn and that was that.

On board 4 John Allan also emerged safely from a slightly offbeat looking opening and appeared to be doing well. The players castled on opposing wings and John’s pawns looked like they would arrive first on the scene against his opponent’s monarch. However, the Newport board 4 – Barbara Graczyk-Gibiec, managed to slow down John’s progress on the queen’s side and then reposition her knight to g3 where it eyed up a Black pawn on e4 and also a tempting outpost on f5. Left with a tough choice to defend one or the other, John played 19…g6?! to keep the knight from f5 and it appears that this decision was incorrect. John was relying on pinning the knight to the king’s rook on the long but perhaps he over looked Barbara’s clever manoeuvre which saw her switch the knight from e4 to d5 with a tempo by checking on f6 first. That essentially left John a pawn down in the end game and, try though he did, he couldn’t hold the balance. That was 3-0 to Newport.

And so, Hebden’s chances of snatching any kind of consolation rested with Dave Shapland on board 1 who had the toughest assignment of all playing White against FIDE Master Grzegorz Toczek. However, it became apparent that Caissa had decided that it was to be Dave’s night as Grzegorz played into a pet opening line of the French Tarrasch that Dave has studied extensively. Then, when the game got complicated and Black’s position started to drift a little Dave was able to develop threats to make a perpetual check on the Black king. Unwilling to allow his much lower rated opponent to gain a draw, Grzegorz opted instead to keep the position murky but by now Dave’s initiative had developed considerably and with some careful calculation he found a way to exchange down to a winning rook endgame – though it must also be said that he missed a forced checkmate at one point! (Did you manage to find 32.Rxg7+! Kxg7 33.Re7+ Kg8 34.Qh7+ Kf8 35.Qg7# in the diagram above? Well done if you did.) With 5 minutes left on his clock to his opponent’s 90 seconds, Dave was able to navigate the endgame to claim a famous victory and snatch a board point from Newport.

For the benefit of those who are uninitiated (or simply can’t remember as it’s been so long!) the game viewer above contains all eight games played on Tuesday night. It will automatically scroll through all of them one after the other unless you tell it to stop by clicking on the ‘=’ button below the board. To select the game you wish to view click on the ‘…’ symbol in the white box above the board. This will reveal a drop down menu for you to choose from and when you select your game will appear. You can navigate forwards and backwards using the arrow buttons beneath the board or click on the moves in the text box on the right. Most of the annotations in these games have been generated by Lichess’ in house engine which creates auto-analysis for every game played (one of the tools they use to track down and punish cheats!) and are therefore part of the download when you export games from Lichess to your own chess engine or database.