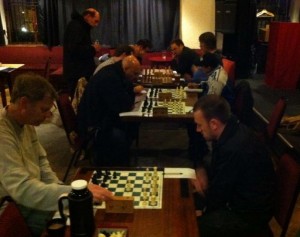 The Barclays Premiership had another so-called “Super Sunday” last weekend. These Sky Sports styled occurrences take place when the league’s top four teams take each other on in the same round of fixtures. On Sunday it was Manchester United and Manchester City who came out on top against their London rivals Tottenham Hotspur and Arsenal.

Of course the Calderdale Chess League can’t really claim to hold quite the same standing in the nation’s collective sporting psyche! But, if it did, then we might have dubbed this week’s round of Division 1 fixtures as “Mega Monday”. As the second half of the season began no fewer than five teams (Todmorden ‘A’, Hebden Bridge ‘A’, Courier ‘A’, Huddersfield ‘A’ and Brighouse) were all within 2 points of each other at the top of the table. Rarely has the league been so nicely poised at the mid-season interval. By a happy quirk of the fixtures schedule, four of these teams were set to face-off during the course of this week.

On Monday night Hebden Bridge ‘A’ hosted Todmorden ‘A’ at the Trades Club. These two teams occupied the top two spots in the league both on 11 points but with Todmorden top by virtue of a better board count. On the first week of the season the two drew at Todmorden so a tight match seemed to be in prospect.

Hebden Bridge had taken the opportunity to bring in a fresh recruit over the Christmas break. Matthew Webb had been approached by the Hebden captain, Dave Shapland, earlier in the season when Matthew Parsons had been unavailable. At the time Webb wasn’t able to step in but, when Parsons appeared to be unavailable again for this fixture, Webb was able to make his Calderdale League debut on board 1. In the event there was a last minute re-shuffle in the Hebden Bridge line-up as first Parsons’ schedule changed to enable him to play and then Nick Sykes offered to sit the match out as he had work commitments of his own to attend to. This left Dave with his strongest possible line-up, probably the strongest Hebden have been able to field for many a long year.

Todmorden meanwhile arrived slightly depleted. Their regular board 2, Martyn Hamer was on a chess holiday abroad as he was taking part in the Gibraltar Chess Festival. All this meant that Hebden’s usual top four boards all dropped down one and Todmorden’s bottom four boards all moved up. This difference was almost certainly critical to the outcome of the match as Hebden cruised to a 4-1 victory.

On board 1 Matty Webb faced Peter Mulleady. Forewarned as he was of his likely opponent and his regular repertoire, Matty was able to arm himself with some in depth theoretical understanding of the Sniper — 1.e4 g6 2.d4 Bg7 3.Nc3 c5. He selected a line that requires Black to play accurately for a lengthy period in order to maintain equality and that small but lasting pressure eventually told as, somewhere, Mulleady went astray. Webb gained a knight and bishop for a rook and then played very accurately indeed to convert the full point. This result represented an excellent debut for Matty at the perfect point in the season for Hebden.

Boards 3 and 5 were the next to finish and they yielded the victories for the home team that sealed the match. Darwin Ursal has been having a wonderful season for Hebden. He is unbeaten and has been playing exciting chess. On board 3 he found himself pitted against Hebden Bridge ‘A’s former captain, Alastair Wright. Wright is always a tricky opponent to meet as he could play almost any opening known to mankind. On this occasion he deployed the Black Knights Tango (1.d4 Nf6 2.c4 Nc6!?) against Darwin in a bid to disturb his equilibrium. At first the plan seemed to be working as a messy position ensued from the opening in which Black seemed to be doing quite well. But then, instead of consolidating, Wright went for it a little too soon and Darwin was able to regain control of the game. After that he never let it go and drove home his advantage mercilessly. This result leaves Darwin at the top of the heap in the “Player Performance” table for League 1.

On board 5, captain Shapland beat Rob Tokeley’s Caro-Kann Defence. Rob used up a lot of his time in the early stages of the game and didn’t appear confident in the variation he deployed (the Bronstein-Larsen variation, 4…Nf6!?) At first Dave played for a spacial advantage and control of the centre but then, when it appeared that the Black king did not have an ideal safe haven to secure himself, he went for a direct attack. Under the pressure of the clock, Rob failed to find the most accurate way to defend and Dave’s attack broke through.

Before too much more of the evening had passed Hebden were 4-0 up. Matthew Parsons displayed impressive strategic understanding of his favourite London system as he remorselessly built up and then exploited his positional advantage against Andrew Clarkeson. With the queens off the board Black’s King’s Indian-style set up didn’t really contain it’s usual poison and, although Black clung on to slim hopes in the end game forcing Parsons to play some accurate moves, he was more than up to the task and closed out the win.

This just left the board 4 encounter where Hebden’s Pete Leonard was playing Neil Suttie. The opening was a Ruy Lopez, an old favourite of Pete’s, nut on this occasion Neil selected a sideline that Pete wasn’t familiar with and his thematic approach turned out to be unsuitable on this occasion. Suttie played resourcefully and patiently to exploit Pete’s inaccuracies but duly converted a superior endgame despite a mild case of zeintot before the time control.

The final match card then was:

This excellent win for Hebden maintains their unbeaten run in the League this season and takes them top of the division for the first time. They have hit the front on their own having dispatched their nearest rivals over the course of the last three matches — Brighouse, Courier ‘A’ and now Todmorden ‘A’. However, there won’t be any complacency for the title race is still very close and more tough matches lie between them and the championship.

Here are the games from this match. Select the game you want to view using the drop-down menu above the board. You can also download all the Hebden Bridge games in PGN format via this Chessbase viewer.

The other clash between teams in the top five took place in Huddersfield last night where the league champions announced their grim resolve to defend their crown by thrashing Brighouse 4½-½! Only Dennis Breen was able to resist his adversary as he drew with Dave Keddie. This result is a stark contrast to the defeat they had suffered in the reverse fixture on the opening night of the season. Perennially slow starters, Huddersfield are still in touch with Hebden Bridge ‘A’ and will fancy their chances of catching them yet. They join Todmorden on 11 points just 2 behind Hebden.

The fifth of the quintet spearheading the division at the start of the night were Courier ‘A’. They might well have expected to have joined Todmorden and Huddersfield themselves as they faced relegation threatened Hebden Bridge ‘B’ at home. If they had such expectations then they would have been sorely disappointed with the outcome of their match for Hebden ‘B’ performed heroically to tie it and might even have won.

The critical match up was on board 1 where Hebden’s Andy Leatherbarrow snatched a last gasp victory from John Morgan who was guilty of over pressing in an equal position. Morgan doesn’t lose often and the phenomenon is even rarer when he operates the White pieces so this was a wonderful result for Andy who has performed admirably for the ‘B’s on board 1 this season.

Unfortunately, Martin Syrett fell victim to Dave Patrick’s cunning tactical play early in the evening and was unable to recover so Andy’s result redressed the balance as the bottom three boards were all drawn. On board 3 Dave Sugden and Robert Clegg fought out a tense battle in which it appears the draw may have been agreed with both players in serious time trouble. John Kerrane neutralised Dave Colledge’s efforts relatively comfortably on board 4 and Neil Bamford came very close to beating Geoff Thompson on board 5.

Here is the full match card:

Here are the games from the Courier ‘A’ vs. Hebden Bridge ‘B’ match. You can also download all the Hebden Bridge games in PGN format via this Chessbase viewer.

This brilliant result (the second time this season the ‘B’s have drawn with one of the big hitters having also tied their own ‘A’ team away) means that Martin Syrett’s men maintain contact with Belgrave, their rivals in the drop zone. Belgrave fixed Huddersfield ‘B’ firmly to the root of the table by beating them comfortably – 4½-½ – at home on Monday night. If Hebden Bridge ‘B’ can match Belgrave’s results and beat them in their encounter towards the end of the season then they may, once again, perform a great escape. You can take a look at the current state of the league table by going to the Calderdale League page of this site.

The League 1 sides return to action again next week as the ‘B’ team travel to Todmorden who will be wounded and very dangerous and the ‘A’ team take on Huddersfield ‘B’ away and must avoid assuming that the result will be a foregone conclusion and be focused on improving their board count against the back-markers.

5 Responses to “Hebden Hit the Front”