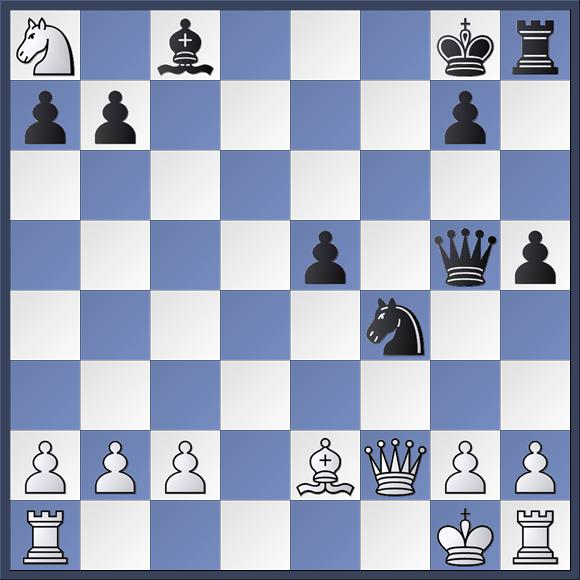 Smothered checkmates don’t come along all that often. In lightning chess however, blunders and sudden catastrophes occur in most games! Here’s one from Monday night (the position is from memory so it might not be 100% accurate). In an unusual position following a wild opening phase White was worried about Black playing Bh3 so he decided to play Bf1 only to be shocked by Nh3 mate!

The Calderdale Evening Chess League held its traditional curtain closer to the season on Monday night as players gathered at the Belgrave Social Club for the team lightning competition. For the uninitiated, lightning games are played to the sound of a buzzer which goes off every 10 seconds. Players must make their move in turn on the sound of the buzzer. Checks need not be announced and kings may be captured to end the game. This format makes for some entertaining chess (see the diagram for evidence!) and surprising outcomes as the playing field between the best and the rest is levelled by the reduced thinking time.

This year only six teams entered the competition which was slightly disappointing considering last year’s excellent turn out. Still, this neatly confined the competition to an all play all over five rounds with five players per side. Despite the small number of teams representation was at least spread from clubs across the league as Huddersfield, Belgrave, Halifax, Todmorden and Hebden Bridge (with two teams) all entered sides.

Last year’s winners, Huddersfield, returned to defend their title in strength as they fielded a truly ferocious line up. Leo Keeley, Greg Eagleton and Mitchell Burke are all rated over 180 and their board 4 was Dave Keddie who is rated at 171! Their captain Robert Sutcliffe completed the line up on board 5.

Right from the start it was clear that Huddersfield’s main rivals were likely to be Hebden Bridge ‘A’ who also came with a strong team of evening league regulars. They had gathered Matthew Parsons, Andy Bak, Pete Leonard, Dave Shapland and Nick Sykes for the occasion. Many of the strongest players from the other clubs did not make an appearance. For example, new League 1 title holders Halifax only had Scott Gornall from their ‘A’ team line up. Last year’s runners up Todmorden didn’t have any of their ‘A’ team at all although they did have a good League 1 regular on board 1 in the form of Neil Suttie. League 2 champions Belgrave had most of their regular line up present too although they supplemented Gordon Farrar and Mike Barnett with Nigel Hepworth and Karim Khan. Hebden Bridge ‘B’ supplemented their line up with Todmorden’s Dave Milton.

The team lightning is decided on board scores rather than match scores and so, having both won their first matches by a margin of 4½ — ½ the crunch encounter between Huddersfield and Hebden Bridge took place as early as round 2. Despite being out-graded on every board but board 5 Hebden Bridge not only beat their rivals but outscored them by the surprising margin of 4 — 1! Only Hudderfield’s Leo Keeley took a win for the title holders.

This margin of victory gave Hebden Bridge a comfortable cushion for the remaining three rounds and put the pressure on Huddersfield to score extremely heavily if they were going to catch up. As it was Hebden barely took their feet off the gas as they scored 5 — 0, 5 — 0 and finally 4 — 1 to take the honours. Dropping only two and a half points through the whole competition was great achievement and, unsurprisingly, Hebden almost swept the board of individual medals as well.

Individual board winners were:

The competition was organised and overseen very capably by Dave Colledge of Courier chess club.