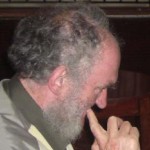 Junior Chess Club is up and running again

After a break for the summer, the junior club is back up and running at the Trades Club from 9 September 2019. Existing and new members are welcome to take part. Drop us a line at hebdenbridgechessclub@gmail.com if you have any questions or would like to know more about junior chess club.

On Saturday the 17th of May, a squad of seven junior players travelled from Hebden Bridge to Sheffield for the South and West Yorkshire megafinal (area final) of the 2014 UK Chess Challenge.

The Hebden Bridge youngsters have always been quite successful at this stage of this national competition. However, this year, with several players new to large competitions, expectations were not quite so high. Despite the lack of experience the young players were very enthusiastic, and they achieved some very creditable results.

The most successful were Luca Curry and Martha Leggett, who each came second in the very competitive Under-11s sections for boys and girls respectively, while Gwilym Hughes came third in the Under-9 boys. The two youngest entrants, Amelie Thomson and Joshua Davenport-Hardy, also  managed good scores for players in their first competition.

I was very pleased with the attitude overall. There was some disappointment that more of the youngsters didn’t achieve the necessary 4 points to progress to the next round, but I’m sure they will do better next time, now they know what to expect.

Hebden Bridge Juniors at the 2013 Megafinals

A squad of eight junior chess players from the Hebden Bridge area set off for Firth Park Community College in Sheffield on Saturday to take part in the Megafinal of the UK Chess Challenge. This is the area final of the major national competition for young players, and included players from all over South and West Yorkshire.

It was a long day of six rounds, but, by the end, the youngsters had acquitted themselves well. Two members, Owen Buchan in the Under-14s, and Yash Mundadia in the Under-10s, secured places in the Gigafinal — the northern regional final, to by played in July — with 4/6. Other players, who narrowly missed qualification with 3½/6, were Alfie Dermo, Alfie Connors, and Luca Curry.

This year, the squad was weakened by illness and the absence of several of our strongest players, but the youngsters showed their usual fine attitude, bouncing back from disappointments, and, in the end, emerging with a very good showing overall.

On Saturday morning, Hebden Bridge Chess Club held the July meeting of its twice-a-year junior congress, the Upper Calder Valley Chess Challenge at the Trades Club, Holme Street. The event is intended as a follow-up to the UK Chess Challenge, held earlier in the year, and gives the young players a chance to try their skills against a wide range of opponents.

This was a pleasant, friendly event, and we were all impressed with the attitude of the young players, especially those new to this type of event. We look forward to running the next congress in November, when they will have that much more experience under their belts, and the competition will be even sharper. We are grateful to the committee of Trades Club who made their facilities available to the youngsters free of charge, and helped everything to run so smoothly.”

On Sunday, fourteen youngsters from the Hebden Bridge area arrived at Firth Park Community College, Sheffield to take part in the Megafinal — the area final — of the UK Chess Challenge. It was a daunting prospect for most of the squad, who were new to competition at this level, but they were determined to do their best. The results at the end of a long day consisting of six rounds, were impressive.

The charge was led by two local stars, Hephzi Leatherbarrow, who scored 5½/6 and won the Under-11 Girls section, and Kyle Sharpe, winning the Under-11 Boys section with 6/6. Kyle’s sister, Leona, surprised herself by coming joint first in the Under-13 Girls, and Owen Buchan came joint second in the very competitive Under-13 Boys. Other players scoring 4/6 and so qualifying for the Gigafinal — the northern regional final — were Nick Shaw and Jonathan Benson.

The youngsters lived up to the reputation we have acquired over the past several years for fine performances and an admirable attitude in what is a gruelling test for most of  them, playing for the whole day against a series of tough opponents. We are all very proud of them.”

Twenty-six local young chess players took part in the Upper Calder Valley Junior Chess Challenge on Saturday at the Trades Club, Holme Street. This twice-a-year event, organised by Hebden Bridge Chess Club, is an introduction to chess competitions and gives the youngsters a chance to get together and try their skills against a wide range of opponents.

Despite the noise of a fire alarm going off accidentally part-way through, the entrants completed all five rounds very competently. The final winner was Hebden Bridge’s Kyle Sharpe with a maximum 5/5, despite some close escapes on the way. Second was Hephzi Leatherbarrow (Hebden Bridge) with 4/5, on a tie-break from Owen Buchan (Hebden Bridge) on the same score.

Overall, I was very impressed by the enthusiasm and good behaviour of the youngsters. All the entrants seemed to enjoy the event. Kyle’s win was no surprise, but it was good also to see grading prizes going to a number of newcomers to inter-club competitions. We will look forward to the next event in six months’ time.

Thanks to the co-operation of the players and their parents, the event went off very smoothly. Kyle’s win was no surprise really, but I was impressed by Wilf Turner, who was playing in his first competition, and beat off challenges from several older and more experienced players in his grading band. Special thanks to the Trades Club, whose staff were very supportive, and offered the use of their facilities free of charge.

Mega result for juniors in the Megafinal 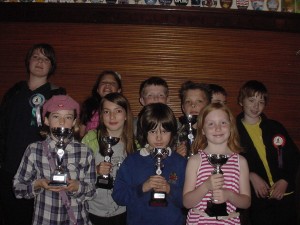 Some proud Hebden Bridge juniors with their silverware

Ten young chess players from Hebden Bridge Junior Chess Club set off on Saturday the 10th of June for the Megafinal (the area final) of the UK Chess Challenge at Firth Park Community College in Sheffield. Hebden Bridge players have performed impressively in this national competition in previous years, and hopes were high for some good results.

After a long, tough day when each of the youngsters had played in six rounds, the Hebden Bridge haul of silverware was remarkable, and the results were the best the club has ever had. Five players won their sections — Robina Murray in the under-11 girls, Hephzi Leatherbarrow in the under-10 girls, Kyle Sharpe in the Under-9 boys, Harry Urquart-Greaves in the under-8 boys and Martha Leggett in the under-8 girls. They will now join Nick Shaw of Castle Hill School, Todmorden, who has already qualified in the Oldham megafinal, at the Gigafinal (the northern regional final) in July in Derby, when they will be playing the strongest players from all over the north of England.

We will have trouble equalling this performance in the future. The youngsters not only played well, but showed a really good attitude, in what was the first tournament for many of them. Junior Chess organisers throughout Yorkshire have come to expect good performances from our players, and this competition has only enhanced our reputation.

This twice-yearly event, which involved youngsters from all the chess clubs in the local schools and clubs, is run according to the Swiss System, in which all entrants play in each round, against opponents with the same cumulative score as themselves. Twenty-six young players took part, ranging in age from 6 to 13 years; the outright winner, with a maximum 5/5, was the formidable Kyle Sharpe, of Hebden Bridge, who, at only just nine years old, is already a very experienced player in junior events. Hephzi Leatherbarrow and Dylan Leggett, both also of Hebden Bridge, scored 4/5, with Hephzi just pipping Dylan for second place on a tie-break.

We all enjoyed ourselves, and the whole thing went very smoothly. Kyle is a great local talent. He is already well-known on the Yorkshire scene, and I expect he will be challenging in national events soon. We are very grateful to the Trades Club for offering their venue and facilities free of charge, and we are all looking forward to next time.

All three, playing in the Minor (ungraded) category, came away with a trophy. Kyle Sharpe, who is only 8 years old, won the section with a score of 6/7, while Spike Leatherbarrow, who won the previous leg of the Grand Prix, tied for second place with 5/7, but was placed third on a tie-break. Spike’s sister Hephzi, took the medal for second-highest scoring girl.

Kyle was, in fact, a little annoyed with himself as, (he had been hoping for a 7/7 clean sheet) having beaten all the stronger contenders, he made a blunder against a relatively weak player, and spoiled his score line. Still, he will have another chance at the next round in Sheffield on the 12th of December.

One Response to “Juniors”