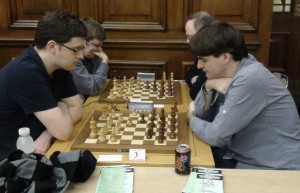 The 25th edition of the British Rapidplay Championships was held at Leeds Metropolitan University’s Beckett Park Campus last weekend. The format consisted of 11 games over the two days and each play received 30 minutes on their clock with which to complete the entire game.

Last year’s champion, Grandmaster David Howell, did not defend his title this time around and so an opportunity was opened for some of the other Grandmasters in the event to try and snatch the crown. Top seed, Gawain Jones (GM), on the right in the picture, did just that scoring a magnificent 10½ out of 11 and winning by a colossal margin from second placed Matthew Turner (GM) who scored 9.

Jones represents the Yorkshire White Rose team in the 4 Nations Chess League so we can lay some claim to him as being one of our own. In addition to this Pudsey Chess Club’s Andrew Bak, a true local player, won the Major Section with a score of 9/11. Congratulations to him.

A number of Calderdale players also took part in the competition.HebdenBridge’s current board 1 player, Darwin Ursal scored 4 in the Open section; Courier’s Dave Patrick scored 5 in the Major; Robert Clegg (also Courier) scored 6 and Halifax’s Carlos Velosa scored 5 in the Intermediate and Terry Sullivan (Hebden Bridge) scored 6 in the Minor.

Normally I’d want to be able to provide a game from one of our local contenders and a game from the winner of the Open. In this case I can achieve both objectives together because our very own Matthew Parsons (facing the eponymous Mr.Jones in the picture above)also took part in the Open and was drawn to face Gawain Jones in round 2. In round 5 he was drawn to face Nigel Davies (GM). He gave a good account of himself in both games which are published in the viewer below. Unfortunately Matthew was not able to compete on the second day of competition but he scored 3/6 on Saturday which is a considerable achievement.

Now back to business as usual. There was Calderdale League 2 action taking place across the valley on Monday night. ‘C’ team Captain, John Kerrane, brings us the news from these ties.

The ‘C’ team, featuring their regular line-up, were playing away against Todmorden ‘C’. Despite an early win by Neil Bamford on board 5, they made hard work of defeating their opponents by a score of 3½-1½. The match hinged on the game on board 3, between Graham Bowker and Hebden Captain John Kerrane, which looked to be heading for a draw, when Bowker made an error leading to an unassailable position for his opponent. His resignation sealed the result.

The ‘D’ team minnows faced a much tougher task in the form of the second division sharks,HalifaxA, at home. Despite a promising opening by Chris Greaves on board 1 against Carlos Velosa, graded more than 50 points higher, and good defensive play on all boards, the greater experience of the visitors was too much for the Hebden training team, and they went down 5-0 in the end.

Hebden Bridge ‘D’— Halifax ‘A’
C.Greaves 0 — 1 C.Velosa
T.Wilton-Davies 0 – 1 P.Moss
T.Whelan 0 — 1 R.Cully
D.Crampton 0 — 1 A.Dawson
S.Leatherbarrow 0 — 1  H.Wood
0 — 5
Next Monday another round of League 1 fixtures take place and, with the top four sides all playing one another, it’s a round that could go a long way towards deciding the destiny of the title. Stay tuned for the results…