It’s been the most competitive League 1 title race in years and it’s going to go right to the tape as both Hebden Bridge ‘A’ and Todmorden ‘A’ won their matches last Monday to ensure that the final round will be decisive.

Of course a competitive league is also a tight league and the two contenders both expended another of their cats lives on their way to victory as Brighouse and Courier ‘A’ respectively ran them very close indeed. The outcomes of both matches were heavily affected by the dreaded zeintot as critical decisions were made quickly and under intense pressure. Here are two examples: 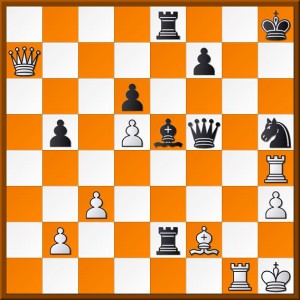 Shapland vs. Hudson: position after 36.Kh1

In this first position (right) from Hebden’s match with Brighouse the away player clearly has the game in the palm of his hand. White is a piece down and his king is extremely vulnerable. White had been hanging on desperately for several moves when this position arose but, critically, it’s the 36th and final move before time control. As he searched for the right way to apply the finishing touch Brighouse’s Nick Hudson glanced at his clock and, suddenly realising that he only had a few seconds to make his move, jerked into life and banged out 36…Rxf2? At this point Dave Shapland (playing White) breathed a huge sigh of relief for, after the clocks had been put back, the game concluded with:

The game assessment has changed completely and now White is winning so, why a draw? Well, you’ll have to read the match report to understand that but let’s just say that when a draw is all that is required to seal a result players can make decisions they wouldn’t make in other circumstances. However, here is a stark example of the last move before time control being critical to the outcome of a game.

Here’s another example from the Todmorden vs. Courier match: 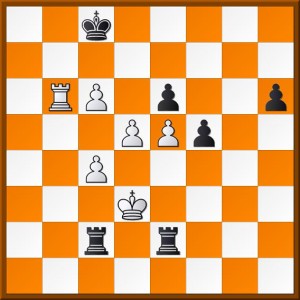 Clarkeson vs. Clegg: position after 48.Kd3

This game has gone past the first time control and both players are (once again!) in desperate time trouble. Of course Black should be winning easily. He has an extra rook. However, when you’ve been playing for over 3 hours and the rest of the players in the match have all finished and are kibbitzing the pressure is absolutely acute.

Black played 48…Ra2?! (48…Rcd2+ 49.Kc3 exd5 50.cxd5 Rxd5 is winning for Black) and when White responded with 49.d6 and offered a draw Black couldn’t see past the various threats to find a solution. Given his shortage of time he felt forced to agree to peace.

Thanks to Todmorden’s Andrew Clarkeson for sending us this critical game. There are lots of interesting variations as it turns out. You can take a look at them all in the game viewer at the end of this post. He described the critical game in the match for us:

We only just beat Courier to keep the title on ice. We used up all our luck in that match when I managed to achieve a draw against Robert Clegg at 10:40pm. I had been lost for ages, a whole Rook down with nebulous compensation, but kept plugging away even with zero time on my clock. With everybody gathered round and his own flag rising Robert saw the spectre of a mate or pawn promotion to a Queen for myself, so reluctantly accepted my draw offer. Of course the truth was he was still completely winning in the final position but that is chess pressure for you.”

This draw turned out to be critical to the outcome of the match as there had already been three drawn games and a single victory for Todmorden on board 5. This last result enabled Todmorden to steal a 3-2 victory that ensured the title race would go to the last round of the season.

Meanwhile, Hebden Bridge ‘A’, having lost for the first time this season in the previous round at Belgrave, were suffering from a severe bout of the jitters. The team was slightly under strength without Matthew Parsons to occupy board 2 but they still appeared to have too much fire power for a Brighouse side that had travelled without their star performer, Dennis Breen.

Half-way through the evening it appeared that disaster was going to strike again for Hebden as 3 of the 5 boards were objectively lost for the home side and one of the other two seemed very drawish. That was when Hebden, who have gotten themselves out of numerous scrapes this year, started to use up more of their cat lives.

First of all Andy Leatherbarrow, deputising for the ‘A’ team on board 5, took advantage of a blunder by Ron Grandage to deliver a checkmate when he was an exchange down. It had been even worse earlier on when he’d correctly sacrificed a piece for an attack but had then misplayed the position to leave Ron with an overwhelming material plus.

By this stage of proceedings Darwin Ursal had already seen off Robert Broadbent on board 1 for the second time this season and that left the league leaders in a commanding 2-0 position that perhaps did not reflect the nature of the struggle.

On board 2, Pete Leonard mis-played his opening against Bruce Bendall and went two pawns down in the middle game. Bruce maintained an excellent grip on the advantage and when the end game arrived he had two connected passed pawns which he duly nursed home for a very creditable victory.

This result combined with Dave Shapland’s plight on board 3 really put the result of the tie into some doubt. However, as we saw from the first diagram in this post, Dave was, to all intents and purposes, saved by the bell (or at least the clock!) when Nick Hudson blundered away all his good work on the last move before time control. Dave glanced across at Nick Sykes’ position on board 4 before offering his opponent a draw that essentially secured the match win. But, as he made the proposition he also said, “I don’t deserve to win this game. Not in this fashion”.

This left Sykes in the happy position of only needing to draw his endgame against Paul Whitehouse. He was a pawn up in a pawn and piece ending but, rather than taking the easy option, to his very great credit, Nick played on. He was, no doubt, spurred on by the painful memory of failing to convert a two pawn advantage against Les Johnson in the Belgrave match and, although many of the kibbitzers felt his slender advantage could not be converted, he proved them all wrong by driving home his last remaining pawn to clinch the match in fine style.

So, both of the top two teams survived substantial scares to ensure that the title race goes the distance. Todmorden play the back markers, Huddersfield ‘B’ away in the last round, a match they must surely win. This means that Hebden Bridge must also win their final round encounter away against Courier ‘A’, a much tougher prospect. If Hebden draw and Todmorden win then it will come down to board count and a 5-0 win for Todmorden (not unrealistic) would snatch the title by the slenderest possible margin… a single drawn game. Could that draw in time trouble by Andrew Clarkeson or Dave Shapland’s sporting draw offer against Nick Hudson when he could have played for a win turn out to be critical moments in the campaign?

Whilst all this was going on Hebden Bridge ‘B’ were also in action at home against their ‘A’ team’s conquerors, Belgrave. With Andy Leatherbarrow having moved up to the ‘A’ team, Martin Syrett had to press himself into service on the top board and Dave Sugden and Josh Blinkhorn were also promoted. The result was immaterial for Syretts’ men as their relegation is sadly already assured. Nevertheless they gave an excellent account of themselves against a strong Belgrave side with four of the five team members earning draws. Only Josh blotted their copy book when he lost to Mike Barnett. All the games from both these league 1 fixtures are in the game viewer at the end of this post. I draw readers attention to Martin’s comfortable draw with a Kings Gambit against Belgrave board 1, Gordon Farrar.

Here is the final scorecard:

This just leaves me to round up by informing readers of the fate of reigning champions Huddersfield ‘A’. They played ‘away’ against their ‘B’ team colleagues and won an odd match (the ‘A’ team was very much under strength and even defaulted board 4) by the odd point. Mathematically this still leaves them in contention for the title but in order to win they would need Hebden Bridge to lose and, more unlikely, Todmorden to draw or lose to Huddersfield ‘B’.

Before I sign off I’d like to mention that Hebden Bridge ‘D’ also played on Monday night in a postponed match against Courier ‘B’. They managed to win the match to secure their second win of the season. More of this in our next post.