Readers must forgive their editor for his tardiness in posting this report from the last round of League 2 fixtures before the Christmas break. A combination of moving house (and therefore having no broadband at home for quite some time) and the need for a prolonged break from drafting website content enforced a full-length festive vacation. Despite the lateness of the post will shall not refrain from including some suitably festive vignettes for you to envisage. 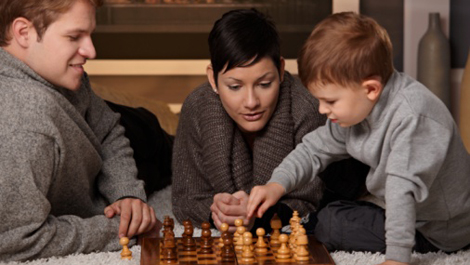 It’s traditional for families to play games together at Christmas. But how many settle down for a round-robin blitz competition after their turkey dinners?

At Christmas time it’s traditional for families to get together, eat, drink, give gifts and often, play games. That said it would be quite unusual to see a family all sitting down to play chess against one another after Christmas dinner. However, that unlikely scenario might just have occured at the homes of two of our club’s members this Christmas. The Leatherbarrow’s and the Sharpe’s have each sported three players in league fixtures this season and so perhaps a family round-robin blitz tournament was not out of the question in either family home over the festive season. On the 17th of December the Sharpe’s practiced for their ‘post-Turkey Chess Olympiad’ (geddit?) by lining up together for Hebden Bridge ‘D’.

Fielding 15 players on the Monday before Christmas is no easy task and so it was not surprising to see team Captains seeking out every possible resource to field their side’s on this night. In fact player availability issues led to some interesting and unusual line ups.

Danny Crampton’s ‘D’ team were without their Captain for the home tie against Halifax ‘B’.  Not only that, their regular board 1 (Robert Murray) and board 5 (Dylan Leggett) were also unavailable which led to the second family trio appearance of the season. Earlier this year the Leatherbarrow dynasty (Andy, Spike and Hephzi) all appeared in the same Hebden Bridge ‘B’ team. This time round (as mentioned above) it was the Sharpe’s (Craig, Kyle and Leona) who made an appearance. Together with Tim Wilton-Davis they did their best against a strong Halifax ‘B’ team.

The result was something of a mismatch but Hebden did manage to score a point on board 2 where young Kyle served further notice that his game is improving all the time as he beat seasoned a Halifax seasoned veteran in the form of Adrian Dawson. Kyle likes to play dynamically and aggressively but in this game he showed his flexibility by keeping it simple, winning a pawn and converting the endgame confidently. The game is given in the viewer at the end of this post.

The match score card was: 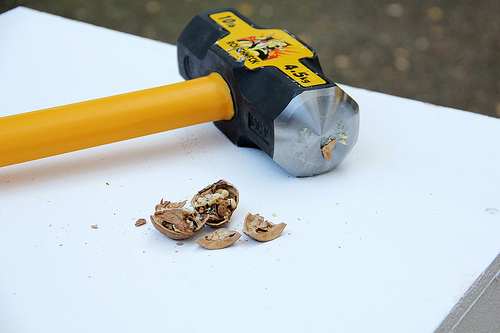 One imagines that there were no family chess tournaments scheduled in the Syrett household over Christmas. The corresponding ‘B’ team fixture hinted that their Captain has a penchant for an altogether more destructive post-dinner time activity. I ask you to imagine Captain Syrett departing the dinning room after his Christmas pudding, paper crown slightly askew, and adjourning to his living room to enjoy Her Majesty’s speech and nice bag of mixed-nuts. Who doesn’t enjoy a few walnuts and brazils whilst watching some Christmas telly? And what implement does Martin use to break into his Christmas nibbles? I’d like to suggest that he may select a sledge hammer…

The ‘B’ team have been flying high this season and look very much like they will be returning to the top flight next year. Like Danny Crampton, their Captain also had difficulties getting together his regular squad. However in this case he was able to draw on some colleagues from the ‘A’ team to plug the holes. The result was total carnage as the ‘B’s travelled to bottom side Todmorden ‘D’ for the mismatch of the season.

In for the absent Josh Blinkhorn came Nick Sykes who played below ‘B’ team regular Andy Leatherbarrow on board 3 on this occasion. Also in on board 1 was Dave Shapland who had only played in two matches for the ‘B’ team this season, home against Todmorden ‘C’ and away to Halifax ‘B’. Both those two matches ended with 5 — 0 score lines in Hebden’s favour so the omens did mot look good for Todmorden’s development squad.

Out-gunned though they were Todmorden showed the right attitude as the mustered plenty of fighting spirit and determination. Each member of the team was eager to discuss their games with their more experienced adversaries afterwards which is definitely a big step forwards down the ‘chess improvement’ road. It’s good to see that chess clubs in the area are still finding new members to bring into league fixtures. Hopefully this Todmorden team will be able to show the same kind of potential that Hebden ‘D’ have demonstrated this season as they grow in experience.

Several of the games from this match are also available in he game viewer below.