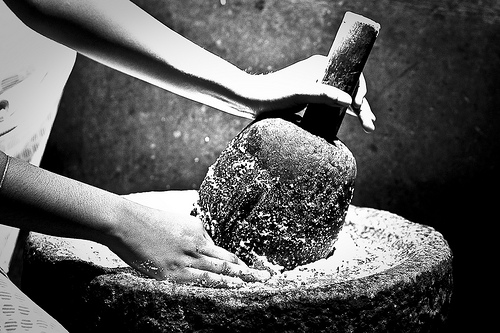 Belgrave were in the grinder on Monday (Image courtesy of NJ.. at Flickr)

It hasn’t always been pretty so far this season but no-one can accuse Hebden Bridge ‘A’ of being ineffective or lacking in fighting spirit.

This is a new look team from last season. On Monday night the only survivor from the team that finished runners up to Huddersfield ‘A’ in 2010-11 was Nick Sykes on board 4. The rest are gone, either permanently or temporarily. Nevertheless team Captain, Dave Shapland, seems to have found a group of players who are ready to fight hard for every point in every match. They haven’t been beaten yet this term and they won’t be beaten easily it would seem.

On Monday night they hosted the league’s back markers, Belgrave. It’s a mark of the tight nature of this year’s competition that Belgrave find themselves languishing in the bowels of the division. Last year they were the league’s early leaders and performed admirably. Their team, unlike their hosts, is the same as last year and yet they are struggling. League 1 really is tough and very competitive this season.

If the competition is going to be challenging then Hebden ‘A’ demonstrated once again that they have the stomach for the fight. They have acheived creditable draws on the road at both Todmorden ‘A’ and Huddersfield ‘A’ and also escaped from a potentially embarrassing home defeat to their colleagues in the ‘B’ team only by winning the last game of the night to finish. Nevertheless, they needed a win in order to maintain contact with league leaders, Courier ‘A’. They served it up with a mixture of gritty combative play and a spot of good fortune which they exploited resourcefully.

Nick Sykes gave Hebden the ideal start to the evening by finishing off Angel Gonzalez in short order. Nick has made an impressive start to the season and this was his third win in a row.

The second game of the night to finish was that of Hebden’s Captain on board 2. Dave’s adversary was Malcolm Corbett. Malcolm has been unfortunate enough to play Dave twice with the Black pieces in the last two years and on both occasions he was on the receiving end of a beating in his favorite Alekhine’s Defence. Time for a change of tactic then. This time he cunningly prepared for a line of the French Defence which he could be sure Dave would play into and he baited the trap heavily. The two banged out twenty-odd moves of theory in next-to-no-time afterwhich Dave found himself facing an interesting and deeply troubling new idea. Forced back on his own resources Dave managed to find a reasonable defensive plan and in the end he just had enough counter play to persuade Malcolm to force a draw by perpetual check. The game was full of interesting tactics that bubbled beneath the surface of the position and threatened to explode at any moment. A draw was a fair result.

Pete Leonard was the recipient of the evening’s charitable donation on board 3. Having lost control of a promising position against Mike Barnett he was left to try and stoke up complications which he did with some degree of success. However, Mike seemed to have defused the situation and be on the way to a hard earned win when he tried to exchange off the queens and overlooked a devilish tactic. Pete was alert enough to spot it and the result was a dramatic and unexpected turning of the tables. This result pretty much assured Hebden of a win with 2½ out of the first 3 points in the bag.

On board 1 Darwin Ursal had obtained an extra pawn against Gordon Farrar but his advantage was minimal. In different circumstances he would have played on for a win but, seeing the match situation, he sensibly offered his opponent a draw. Gordon was not in a position to refuse and thus, Hebden Bridge sealed the match with 1 board still in play.

Board 5 had been a see-saw affairs with Dave Sugden of Hebden Bridge falling an exchange behind before setting an elephant trap for Belgrave’s Les Johnson to fall into. He duly did and it cost him a whole rook. However he got some counterplay and Dave, under some duress, went astray and was compelled to give in when he faced losing his queen or getting mated. Dave’s had a tough run in recent weeks but he’ll be back and whilst he has been struggling his team mates have been their to help him out. No doubt later in the season he will be the one saving his colleagues’ bacon.

Hebden Bridge ‘A’ — Belgrave
D.Ursal ½-½ G.Farrar
D.Shapland ½-½ M.Corbett
P.Leonard 1-0 M.Barnett
N.Sykes 1-0 A.Gonzalez
D.Sugden 0-1 L.Johnson
3-2
Meanwhile, on the next line of tables, Martin Syrett’s ‘B’ team were battling against the league champions of Huddersfield. The visitors’ line-up was weakened still further from the slightly below par line up they had fielded in their last home match against Hebden Bridge ‘A’ and yet that still proved enough to dispatch the home side. John Kerrane takes up the story.

Hebden Bridge ‘B’ team has been seriously weakened this season by the club’s loss of several strong players since the beginning of the year, to the extent that three of the players lining up to face Huddersfield ‘A’ were regular members of the ‘C’ team. The current league champions were always going to be a difficult challenge for the home side, but they gave a good account of themselves, especially in the games on the lower boards, were the ‘C’ team players gained two points out of a possible three. Noethelessthe final result was a 2-3 win for Huddersfield ‘A’.

The individual results were:
Hebden Bridge ‘B’ — Huddersfield ‘A’
A.Leatherbarrow 0-1 M.Burke
M.Syrett 0-1 C.Booth
J.Blinkhorn ½-½ R.Boylan
J.Kerrane ½-½ A.Aguirre
S.Priest 1-0 B.Corner
2-3
A selection of the games are available for your entertainment in the viewer below. You can also download these games and see the full annotations for those that have commentary by following this link to Chessbase’s online viewer.
Elsewhere in division 1 a sole leader finally emerged in the form of Courier ‘A’. They dealt out another terrible ordeal to Huddersfield ‘B’ who, in between 2 creditable draws with Belgrave and Hebden Bridge ‘B’ have received a couple of sound beatings. This time the league leaders won 4½-½ with only Robert Sutcliffe on board 1 saving them from total humiliation.
In the final match-up of round 5 Todmorden ‘A’ strengthened their line-up still further (it barely seems possible) by adding another 170+ graded player to their line-up to greet their visitors, Brighouse. Brighouse themselves are not known to be the best travellers but, on this occasion, their lofty status coaxed them into bringing a strong line up on their longest journey of the season. Sadly it still wasn’t enough as Todmorden’s team of superstars cut them down by a score of 3½-1½.
All of this means that Hebden Bridge ‘A’ climbed up to second in the division with a marginally superior board count to Todmorden ‘A’ and Brighouse. These 3 are 2 points behind Courier ‘A’ who host Todmorden in round 6 while Hebden Bridge travel to Brighouse. With the top 4 all playing each other Huddersfield ‘A’ will have an excellent opportunity to make up some ground. The title race is hotting up!

3 Responses to “Remorseless ‘A’s grind on”