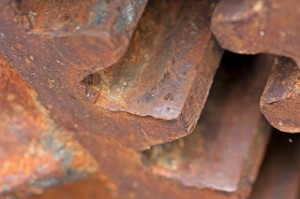 Rusty brain cogs stuttered back into action over the last few weeks as the Calderdale League begins again. Image used under Creative Commons terms and sourced from mclcbooks’ Flickr photostream

Over the last couple of Monday evenings the first round of a new Calderdale Evening Chess League season has begun as players up and down the valley tried to remember how to move the pieces, press the clock and record the moves after their summer holidays.

Reigning League 1 champions Halifax ‘A’ hosted Brighouse, Courier ‘A’ hosted Belgrave and Todmorden ‘A’ and ‘B’ contested their two derby fixtures. We’ll come back to these matches in a moment. First of all let’s cover Hebden Bridge ‘A’s opening assignment against Huddersfield.

The match was originally due to be played on Wednesday night at Huddersfield but Hebden Bridge’s new captain Pete Leonard requested a swap of the home and away fixtures when it came to light a month or so before the match that, for one reason or other, Hebden were going to struggle to field a team on that Wednesday night. Huddersfield captain Dave Tooley generously granted the switch and so Huddersfield travelled to the Trades Club on the Monday night.

Last season the two sides swapped away wins but changes to both line ups in the close season meant that Huddersfield appeared to be firm favourites on paper this time. Matthew Parsons decided to switch his allegiances over the summer and represented Huddersfield rather than Hebden in this match. Add the other team members of Greg Eagleton, Mitchell Burke, Dave Keddie and Dave Tooley and that meant Hebden would be heavily out-graded on every board.

However, when Mitchell suddenly became unavailable on the night of the fixture Huddersfield donated a board to their hosts and the complexion of the tie changed. Could Hebden take anything from the match when given a point’s head start? As ever it was a very tight contest between these two sides with the Hebden players sensing the opportunity to upset their more powerful rivals.

Sadly the night did not get off to a very positive start for the hosts as the stand in captain on the night (Pete Leonard was on holiday) Dave Shapland, lost in fairly short order to Matthew Parsons who was promoted up to board 2 in Mitchell’s absence. These two have played each other many times and Dave has never won a game at the standard league time limits. Never the less he gave Matthew a stern test the last time he played with the White pieces and, possibly as a result, Matthew opted for the solid Caro-Kan Defence rather than the more volatile Sniper which has become his trade mark.

Dave eschewed some of the more manic lines he’s been known to play and chose instead the mainline which seemed to give him a solid position with a miniscule edge if anything at all. However, just as the game was poised to get interesting in the middle game Dave blundered a piece and resigned in dismay very shortly afterwards. His recent run of form does not bode well for the season to come.

Huddersfield had already erased their arrears and now the match would be decided over three boards. Next to finish was Andy Leatherbarrow’s game against Dave Keddie on board 3. This was not the most thrilling of encounters as Andy, who was conceding over 20 rating points to his opponent, sensibly charted a solid course through the opening against a very passive Black set up. Pieces were exchanged and the players quickly reached a queen and pawn ending which could have been continued but a draw was agreed almost immediately. Neither of the players was prepared to take a big risk and with the match in the balance that wasn’t an unreasonable decision.

Quite the contrary to this game the board 1 encounter was played in the most gungho, adrenalin-fuelled fashion. Andy Bak took on Greg Eagleton’s Najdorf in the most direct and critical way possible and Greg responded by steering the game into the infamous ‘Poisoned Pawn’ variation where White gives up his b2 pawn in exchange for speedy development and good attacking chances. The variation is known to be mind-bendingly complicated and this game was no exception as both players consumed time on their clocks early in the game trying to fathom what was going on.

The game was fascinating and the onlookers were greatly entertained but as is so often is the case in these types of game the clock ended up deciding the result. With only a minute or so left to make 8 or 9 moves, both players were in desperate straits and could easily have blundered. Andy ran out of time as he made his 36th move but in his haste to make time control himself Greg didn’t notice and also ran out of time. Both flags had fallen and the players weren’t entirely sure whether or not they’d made the requisite number of moves. Had they done so they might well have put the clocks back and continued but when they reconstructed their final moves it became clear that neither of them had made it and so they correctly and sportingly agreed on a draw. The match was level at two all.

This left the game between Nick Sykes and Dave Tooley which was a tight and tense affair for entirely different reasons. Both players were rock solid as Dave played the French Defence and Nick built up a pleasant space advantage which looked like it would place him in at no risk but would also be very difficult to convert. They could logically have agreed on a draw very early on in the evening but both played on each sensing that they might need to win the game to help their team gain a result.

On and on they went with the position simplifying down to rook, knight and pawn endgame. Dave managed to snatch a pawn but with the pieces still on and only a two to one pawn advantage a draw still seemed the most logical outcome. That result would have given Hebden a famous fighting draw but unfortunately Nick couldn’t manage to hang on in difficult circumstances. Fatefully he acquiesced to exchange knights when a rook exchange would have been more conducive to holding the balance. Dave’s king and rook were well placed to shepherd home the last remaining pawn and at the very end of the night Nick tipped his king and Huddersfield edged the tie 3 — 2.

The other fixtures in round 1 were similarly close which perhaps suggests some rustiness after the summer break. Halifax ‘A’ will sit atop the first 2014-15 league table of the season as they were the only side to win by more than a single point. They saw off Brighouse 3½ — 1½ but this hides the fact that they were donated two defaults and only tied the top three boards with a win a draw and a loss. Halifax don’t appear to be quite as strong as they were last season as they are missing Winston Williams but Bill Somerset and Darwin Ursal both played in this match contrary to rumours that they too would be absent this year.

Last season Todmorden ‘A’ only lost a single game when they had the home advantage. So, when they sported two new players who were strong enough to demote Andrew Clarkson to board 5 (!) it appeared that they would completely dominate their ‘B’ team. That didn’t happen though as Pete Mulleady could only manage a draw against Mike Connor and the new boys on boards 3 and 4 only mustered a half point between them. It was left to ‘A’ team stalwarts Hamer and Clarkson to secure victory by the narrowest possible margin and Tod ‘A’ have now already lost their first game at home this season.

Last but certainly not least Courier ‘A’ beat Belgrave 3 — 2 at home with Messrs Slinger (board 1) and Cawston (board 3) scoring victories in a new look line up for Courier as Robert Clegg and John Morgan were both absent. Belgrave meanwhile were without Malcolm Corbett but still managed to win on board 2 as Karim Khan beat Dave Patrick. Boards 4 and 5 were drawn.

All of this means that the top four teams from last season once again asserted their authority as Halifax are followed by Huddersfield, Todmorden ‘A’ and Courier ‘A’ whilst Hebden ‘A’, Brighouse, Belgrave and Todmorden ‘B’ appear to be in the fight to stay up. The next round of fixtures is on the 6th of October and the choice tie of the round appears to be Halifax’s visit to Todmorden ‘A’.

On Monday evening the League 2 teams got underway with Hebden Bridge ‘B’ and ‘C’ both in action. John Kerrane provides a brief report and results:

Hebden Bridge B opened their season with an away match against Courier B in Halifax, and came away 3½-1½ winners, aided largely by a double default by their opponents. The individual results were:

Meanwhile, Hebden Bridge C travelled to Todmorden WMC to take on Todmorden C, and were thrashed 4½-½. Only captain John Kerrane managed to salvage half a point and avoid a whitewash. The individual results were: