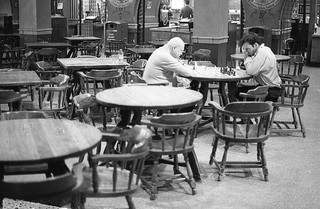 Darwin Ursal has had to play an even longer game than this one to capture the Individual Summer Knockout title. This image is sourced from Maxwell GS's Flickr photostream

Hebden Bridge Trades Club was a hive of activity on Monday night as our League 2 teams met for their second derby clash of the season and Dave Sugden and Darwin “Draw-Win” Ursal met to replay their Individual Summer Knockout Final for the second time.

You’d need an excellent memory to recall that the individual knockout began almost a year ago and was supposed to have been concluded before the new league season began. Unfortunately the rules allow for drawn games to be replayed and with no fixed schedule for games and a high rate of draws between participants this year’s edition lagged into the league season whereupon its progress slowed to a pace best described as “glacial” when league fixtures made it even harder to schedule games.

Those readers who are interested can take a look at the full draw and results on the “Summer Knockout Tournament” page. Suffice to say that Darwin eventually emerged victorious to maintain his reign of terror over Calderdale this season. He is unbeaten in all competitions and has already bagged the Calderdale Individual Championship to add to his trophy cabinet. If Hebden Bridge ‘A’ can lift the League 1 title next week then he will only require the Team Lightning and Team Knockout titles to complete a Calderdale Grand Slam! It will be a signal achievement when someone finally manages to beat him.

Whilst Darwin was practicing his Midas touch Hebden Bridge ‘D’ entertained Hebden Bridge ‘C’ in League 2. John Kerrane provides us with the match report below:

Hebden Bridge ‘D’ played against their senior colleagues in Hebden Bridge ‘C’. The result 4½-½ win to the ‘C’ team was no surprise although the strongest opposition was provided by the ‘D’ team’s two junior members. Kyle Sharpe, on board 1, played a very good game against Terry Sullivan, but went down eventually by mis-handling a difficult endgame, while Spike Leatherbarrow, on board 5, took advantage of an error by his opponent, Ray Deravairere, to force a well-earned draw.”

All of the games from this match can be found in the game viewer at the bottom of this post along with a selection from Hebden Bridge ‘D’s excellent win against Courier ‘B’ which I mentioned in my last post.

This result insured that the ‘C’ team maintained their second position in the League two points behind Todmorden ‘B’ and one in front of Halifax ‘A’. Next week Todmorden and Halifax meet before Halifax and Hebden Bridge ‘C’ round off the season with their postponed fixture on April the 30th. If Hebden can keep their noses in front then we will maintain two teams in both divisions next season despite the ‘B’ team’s relegation.

I’ll close this post by informing readers of the fate of Calderdale’s two Yorkshire League sides who completed their fixtures for the season last Saturday.

Calderdale ‘A’ finished the season in fine style with a comfortable 6½ — 1½ win over Sheffield ‘D’. This left them 5th in the Woodhouse Cup league standings which team Captain, Dave Patrick, informs us is the best result for a Calderdale side for about 30 years! Congratulations to them. Sadly, Calderdale ‘B’ lost to Sheffield ‘E’ by a score of 3 — 5 and got relegated from the I.M. Brown League as a result. Match reports and results are available on the excellent Yorkshire Chess website.

Three games from these fixtures by Hebden Bridge players are available in the game viewer below. For Calderdale ‘A’ Darwin Ursal won a nice game against his opponent’s offbeat Budapest Gambit. On board 1 for the ‘B’ team Dave Shapland lost in a tough game on the Black side of a Budapest which saw a very different and more orthodox treatment of the opening. Finally, Andy Leatherbarrow can be seen finishing off his game for Calderdale ‘B’ in percussive fashion with an aesthetic checkmate.