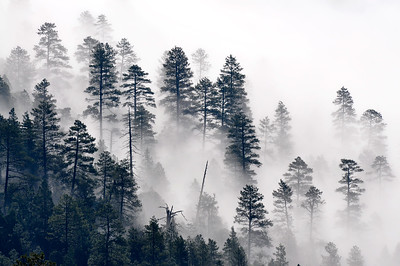 The mist has finally cleared in the League 1 title race and we can now clearly see who the favorites are despite the fine margins involved. Photo: Coconino National Forest

Here is a brief article to bring readers (almost!) up to date on the status of the League 1 title race.

Hebden Bridge ‘B’ hosted Huddersfield ‘A’ at the Golden Lion last Monday (the 2nd) to play their match in hand. With this match both Hebden teams have now played nine times and so the position in the league table clarifies itself somewhat.

A win for Hebden ‘B’ would take them top of the league on board count, overtaking their ‘A’ team for the first time this season. The home side’s line up remained unchanged from the previous week’s match away at Belgrave ‘A’. Huddersfield visited with a marginally stronger line up than they had fielded against Hebden Bridge ‘A’ at home in the previous round. Out went David Booth on board 4 to be replaced by Richard Boylan, an experienced and steady presence. The visitors also swapped the order of their top two boards from the previous week with Steve Westmoreland playing on board 1 and Dave Keddie on board 2.

By the mid point in the evening the visitors seemed to be holding their own pretty well as Nick Sykes held Andrew Clarkson in a theoretical Grunfeld battle and Richard Boylan also drew his game with Sam Swain. The home side had won on board 5 however where Jamie Heritage continued his unbeaten streak for the club by beating Rob Mitchell. The game was not without chances for the visiting player however as you’ll see from the game viewer below.

Later in the evening however, Hebden’s ferociously strong top board duo gave the victory a pleasant gloss as Martyn Hamer overcame Steve Westmorland and Phil Cook defeated Dave Keddie. With that victory Phil puts himself in pole position for the League’s ‘Most Valuable Player’ title as he has now scored 7½/9 games. He is now a point and a half (!) clear of his pursuers, his team mate Martyn, Hebden Bridge ‘A’ captain Dave Shapland, Vivienne Webster of Halifax and Dave Patrick of Belgrave who all have 6 points. In fact Hebden Bridge ‘B’ have four players in the top 10 list of highest scorers in the league and so it’s easy to see why they have climbed to the top of the heap.

This result means that both Hebden Bridge teams now have 15 points from nine games. They have both drawn one and lost one match. In fact, their records are identical except for in the ‘Boards’ column of the table as the ‘B’ team have now scored 31.5 board points and the ‘A’ team have 28.5. This may seem like a narrow margin, but with only three matches left to play this season,  a three point board count lead is significant especially when you note that Hebden Bridge ‘B’ have to play the two sides at the bottom of the division as well as Halifax ‘A’ with the White pieces, while Hebden Bridge ‘A’ have to play Belgrave ‘A’ and Halifax ‘A’ with the Black pieces and have Belgrave ‘B’ away for their other match. It seems most unlikely that the ‘A’ team will be able to overhaul the board count deficit and so may now be relying on an unlikely shock match result to turn the tables in their favour. Either way, the ‘B’ team are now most definitely in the driving seat.

Let us also note an excellent result for our ‘C’ team in League 2 on Monday night as they beat Belgrave ‘C’ at home in what looked like a tough match. On board 1, Pete Leonard got lucky when, after playing a winning combination, Faisal Rabbi resigned after an unexpected move by Pete, when objectively, he was still winning. The board 5 game was the last to finish and here Paul Gledhill had about 10 moves to make in a couple of minutes, but it was his opponent, Paul Edwards who made the inaccuracies, and then resigned.