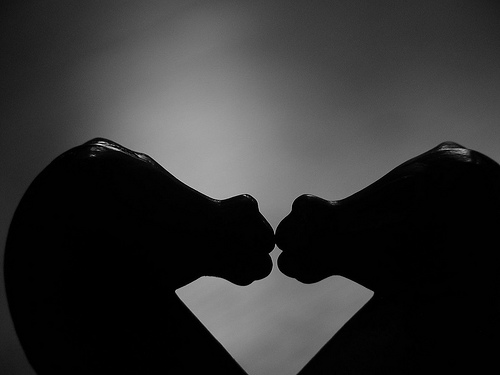 On Monday night, as all the teams in Calderdale gathered to indulge in one final round of fixtures before the Christmas break, it was clear that no clear front runners had emerged from either of the two leagues.

In league 1 Todmorden ‘A’, Hebden Bridge ‘A’ and Courier ‘A’ all started the night on 9 points and just behind them Brighouse and Huddersfield ‘A’ were ready to take advantage of any slip ups. In the event Todmorden destroyed the division’s bottom team, Huddersfield ‘B’ by a score of 4½-½. This was enough to propel them to the top of the table on board count.

Of all the top five it was Hebden ‘A’ and Courier ‘A’, facing each other, who where inevitably going to drop points. Courier turned up to the Trades Club with a new recruit in the form of Kevin Winter who slotted in to board 4 whilst Dave Colledge dropped down to board 5. Hebden Bridge had also strengthened their line up as they welcomed back Matthew Parsons to board 1. This enabled the rest of the team to drop down a board and that proved to be vital to the outcome of the tie.

On paper the two teams appeared very evenly matched and that meant that home advantage (all home players take the White pieces) could prove to be the decisive. This turned out to be the case as Hebden ran out 3-2 winners to join Todmorden on 11 points and relegate Courier into a share of third spot.

On board 1 Matthew could have been forgiven for feeling a little rusty but he developed a considerable advantage against John Morgan and could well have converted to a full point. Instead he missed a couple of opportunities and had to settle for a draw.

On board 2 Darwin Ursal has been a huge asset for Hebden this year. He is unbeaten so far this season and has consistently found ways to set his opponents extremely challenging problems over the board. On this occasion Dave Patrick got into significant positional difficulties early in the game and, whilst sailing very close to the wind on the clock, Darwin ensured the win with some precise calculation in a materially dynamic situation.

Team Captain Dave Shapland also had Robert Clegg on the rack straight out of the opening. On this occasion Dave chose to side-step his favourite variation of the French Defence and elected to play what is considered to be the mainline. It worked out well as Robert snaffled two pawns but fell behind in development. Before he knew it Dave had won the material back and was in possession of a very dangerous attack to boot. However, Robert defended cunningly and resolutely and Dave overlooked the best way to proceed. By the time the game finished the match was over but Robert had salvaged a precious board point for Courier with his resilient play.

Pete Leonard played in a more positional style against Kevin Winter on board 4. He created a series of structural weaknesses in his opponent’s pawn chain and then set about trying to exploit them. Kevin obliged him by trading off pieces and in the end, in a bishop and pawn ending, Pete broke through on the queen’s side and promoted his a-pawn to secure the match for Hebden.

Along with Darwin and Pete, Nick Sykes has been the engine room of the Hebden ‘A’ challenge. After losing his first game of the season he went on a superb run of victories and slowed his pace only in this fixture with a solid draw which set the foundations for the result. He met Dave Colledge’s tricky variation of the Scandinavian in an unpretentious fashion and quickly defused any attempts at counter-play.

The final match scorecard is below:

All that remains to be said about the ‘A’ team is that they remain unbeaten at the halfway mark and, but for a surprising draw against their ‘B’ team colleagues, they would be top on their own. They have also played three of their top four rivals away and have scored more points against the rest of the top five (6 to be precise) than any of the others in that group. Their first fixture after Christmas will be at home against their title rivals Todmorden ‘A’ in a clash that could go some way to deciding where the title goes this year.

Brighouse kept themselves within reach of the title race by beating Hebden Bridge ‘B’ in another fixture that took place at the Trades Club on Monday. Sadly, Hebden ‘B’ were the team that suffered most from the confluence of fixtures taking place across both leagues and they were only able to get three players to the match. Despite that they may a decent fist of the fixture by scoring 2 out of 3 and losing the match by the narrowest of margins.

Matthew Wedge-Roberts, back from university for his Christmas holiday made a guest appearance on board 1 and came close to beating Robert Broadbent before finally conceding a draw. On board 2 Andy Leatherbarrow acquired a comfortable draw with Bruce Bendall and on board 3 Martin Syrett beat Nick Hudson in a suitably combustable King’s Gambit.

Here is the scorecard from the ‘B’ team’s match:

All the games from these two fixtures are in the game viewer below for your entertainment. I can assure you there is plenty worthy of your attention in here. I think this is the best crop of games I’ve published so far this year in terms of quality.

I haven’t mentioned the title holders’ Huddersfield ‘A’ in this report. That’s because they are due to play Belgrave at home on Thursday night. If they win that match they will join Courier and Brighouse on 9 points just 2 behind Todmorden and Hebden. This year’s title campaign simply refuses to crystalise. This is no two horse race. All the top five teams are very much still in it at the halfway stage.

I hope to provide an update and some games from the League 2 fixtures involving our ‘C’ and ‘D’ teams before the end of the week.