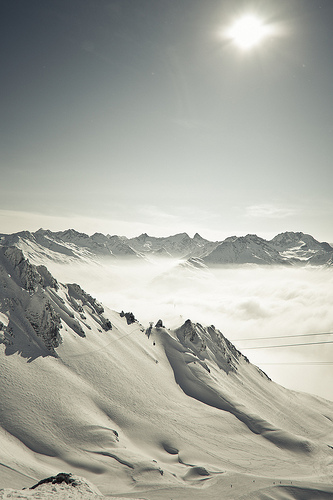 A postcard from St. Anton, where your webmaster has been conspicuously avoiding chess. This wonderful image was sourced from clinstedt's Flickr photostream.

Apologies to our regular visitors for last week’s radio silence. Your webmaster has been taking his recreation in the Austrian Tirol and has returned refreshed and invigorated. Despite being in foreign parts word never-the-less reached our ears about the final round of this season’s Calderdale Individual Chess Championship. John Kerrane organised and managed the final round in the absence of Paul Edwards (who has done an excellent job in his first year in charge of the competition) and he reports on the proceedings.

Twenty players gathered for the fifth and last round of the Calderdale Individual Chess Championships, hosted by Hebden Bridge Chess Club at the Trades Club, Holme Street, on Monday evening.

The contest for the top prizes depended on the results on the top two boards, where Mitchell Burke of Huddersfield and Hebden Bridge’s Darwin Ursal agreed a draw, while Pete Leonard, also of Hebden Bridge, beat off an attack from Robert Clegg of the Courier, to force a win. This left Darwin Ursal with first prize on 4½/5, while Pete Leonard also on 4½/5 was edged into second prize on a tie-break. Grading prizes went to M. Burke (4/5), A. Leatherbarrow (Hebden Bridge, 3½/5), M. Barnett (Belgrave, 3/5) and John Aldridge (Halifax, 2½/5)” 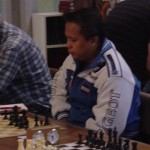 Let us offer round some congratulations to the performers of note. Of course we should begin with the new champion. Darwin has so far had the kind of year John Morgan enjoyed last season. He is unbeaten in the league and cup competitions and tops the list of individual point scorers in league 1. He is a worthy champion. Well done Darwin!

The second placed contestant, Pete Leonard, also deserves a hearty “Congratulations” for an excellent performance. He beat last season’s champion in round 3, drew with the top seed in round 4 and scored an excellent win with Black against the ever-competitive Robert Clegg in the last round. Pete was only beaten in to second place by virtue of Darwin’s marginally swifter pace in reaching 4 points. Pete has annotatedhis game with Robert in the game viewer at the bottom of this post. As always his commentary is honest, elucidating and even handed. Thanks to Pete for sending this. I’ll add more games to the viewer when I can get hold of them. 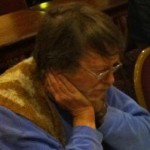 Mitchell Burke was also undefeated and finished on 4 points having drawn with both of the two players above him. Mitchell certainly has the potential to win this tournament in years to come.

Finally I’d also like to congratulate the 3 players who finished on 3½ points. Huddersfield’s Robert Sutcliffe had a good showing in last years championship too and this year he beat reigning champion John Morgan in round 4 losing only to Mitchell in round 2. Former champion Andy Leatherbarrow was typically resiliant with his display although he managed to stay slightly below the radar this year. He beat both Nick Sykes and Adrian Dawson (in fine style too!) and was unbeaten with those two wins and three further draws. Josh also managed to bounce back from a first round defeat to John Morgan with 3½ from his last 4 games. Well done to all of these three and the grading prize winners.