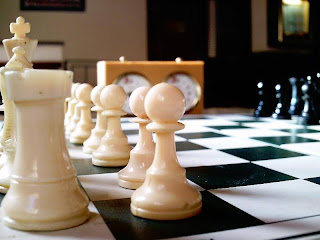 As a new chess season looms large in Calderdale can I find fresh grounds for unjustified optimism? Of course I can! Show me an “over-the-board” (OTB) player who doesn’t feel a surge of excitement about the untold stories that lie in wait over the coming months and I’ll show you a dead man. The very fact that OTB is seasonal in nature means that it provides a very welcome adrenaline injection for club players. No matter how much online or correspondence chess you play you never get the same buzz that you get at the start of the season. I’m sure every amateur sports person would testify to getting the same feeling, no matter what their sport.

So, what should I expect from the new season? Well, last year in the Calderdale league my team, Hebden Bridge A, finished second in the first division and I made third place in the Calderdale Individual Championships. Frankly, I’d be delighted with a similar performance this season. In the league, the champions, Huddersfield A, are almost certainly going to be the strongest team and will probably win again this year. The season will probably boil down to our two matches with them and I give us maybe a 1 in 5 chance of winning either of those ties. I can’t see anyone else taking points off them so we’d need to win all the rest of our matches (certainly not a given) and probably match their board count as well. Hebden Bridge A are capable of winning the league but it will be very difficult indeed.

From an individual perspective I was pretty happy with my Calderdale Championship result last year and I know from having played in it for 3 years now that it is a very open tournament indeed with the top 15 to 20 players all capable of beating each other on their day. I’ll be happy if I’m in contention again this season come the final round in March. The area where I want to make big improvements is in my league performance. Last season I did no better playing board 3 in our “A” team than I had done in either or the previous two seasons playing on board 1 for our “B” team and I was in the same division for each of those seasons! I need to tighten my game up this season which will probably mean deploying a slightly more reserved opening repertoire. Last season I simply lost too many points to players graded below me. In addition to this I lost twice in our matches with Huddersfield and that cost us dearly we lost at home by an odd point and drew away. If I’d drawn both games we’d have drawn and won those matches. On such fine margins will the success of our season be decided.
The new season starts tonight with Hebden Bridge A, playing Courier A at home, a tough opening fixture. I’ll be posting a journal entry on this blog for every game I play in Calderdale so if you want to have the pleasure of watching my suffering unfold as it happens do tune in regularly.

2 Responses to “A Shiny New Season is Dawning”