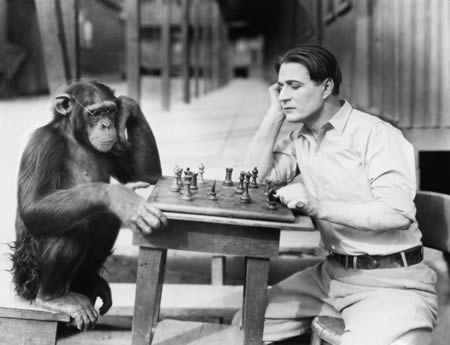 Who hasn’t made a monkey of themselves at the chess board from time to time?

Unfortunately there is no other way to put it. All but one of the five games in the Todmorden ‘B’ vs Hebden Bridge ‘A’ match were decided by catastrophic  mistakes. As you’ll have read in our last post, Hebden made a spirited (if slightly flattering) start to the season with a 5 — 0 win against Belgrave at home. They understood of course that Todmorden ‘B’ away would be a tough proposition. Last year they won the corresponding fixture but it was a hard fought battle against experienced and resilient opposition.

This time around Todmorden’s line up was even more closely matched to the visitors than the previous year. On board 1 Neil Suttie is the kind of player who can beat anyone on a good day and even on his bad days he’s not at all easy to beat. Hebden captain Pete Leonard was Neil’s opponent. On board 2 was Mike Huett, who drew with his much higher rated club colleague Phil Cook, in the first round fixture, confirming that he is in good form. He played Nick Sykes. On board 3 Richard ‘Beaky’ Bedford spends less time at the board than he once did but in his three games last season he scored 2½/3. He was up against Dave Shapland. Rob Collier on board 4 is a solid opponent who’s also capable of getting results against players rated above him. Andy Leatherbarrow faced up to him.  Finally on board 5 was the tricky David Innes who, as several Hebden players know only too well, can connive to trap and trick with impunity. He was up against fellow swindler extraordinaire Martin Syrett.

It all began well enough for Hebden with everyone gaining a good foothold in their games. The first game to finish was board 3 where Dave Shapland made a bold decision to take on Richard’s somewhat lugubrious opening system very directly. He jabbed with a very early g5 against Richard’s castled king position and then followed up in a similar vein, placing his pieces on threatening squares. Richard held firm but missed his best opportunity to defend himself, before getting his pieces somewhat tangled up and then  capitulated on move 19 when he moved the only piece that was guarding against mate in 1. A bad start for Tod then but who at that stage of proceedings would have expected that to be Hebden’s last full point of the evening.

Board 1 finished next. Here Pete had done well out of the opening with his trusty Alekhine’s Defence seemingly coming as a surprise to his opponent. Slowly, Neil stabilised his position though and eventually, when the play sharpened he began to create some threats before, in a difficult position, Pete blundered into a knight fork of his king and queen. It looked like his position was worse anyway but that was no consolation to him as is resigned.

This result put the rest of visitors somewhat under pressure. On board 5 Martin had weathered the early storm Dave had whipped up with his Smith-Morra Gambit.  However, the position was very messy and complex and it looked ripe for a decisive encounter between these two tacticians. Board 4 was a tough battle where Andy had equalised and was maybe even better but he was, as he often is, quite short of time. Finally, on board 2, Mike had chosen to dodge ‘the Syko’s’ opening knowledge by playing the Orangutan (1.b4!?). He obtained a good position from the opening but Nick patiently gained equality and then won a pawn when Mike overlooked a tactical nuance. The match was finely balanced.

But then, suddenly, it wasn’t. Martin just made time control and had succeeded in pushing Dave back. He gained the exchange for a couple of pawns but then, just at the moment when he had the opportunity to exchange off most of the pieces and simplify to a rook and pawns versus bishop and pawns ending, he opted instead for a ‘clever’ move and ran into a neat skewer that decided the game on the spot. It was 2 — 1 to the home team.

Now the pressure was really on the remaining Hebden players. One of them needed to win to tie the match or both of them to win it. It seemed unlikely. Andy was in desperate time trouble and Nick, despite his extra pawn appeared to have a long drawn out task ahead of him with no guarantee of converting. It was at this point that Mike Huett did something rather clever, he offered a draw. This was a devastating psychological ploy because Nick was clearly tempted but couldn’t accept because of the match score. Any player declining a draw then feels obliged to play for a win. Nick did have some chances to play for a win but before he got to try and exploit them he blundered into mate in one, the second one of the match but this one was decisive. Of course he was inconsolable afterwards.

That just left Andy and Rob to conclude their game which was now pretty much gridlocked. Both players had a pair of bishops and the same number of pawns. With no match result to play for they agreed to share their point.

If Hebden Bridge had any title pretensions at the start of the season then they will certainly be disabused of them now. In typically brave and unblinking fashion, both Nick Sykes and Pete Leonard have annotated their personal tragedies and Dave Shapland and Andy Leatherbarrow’s games can also be found in the viewer at the end of this post.

Across the room from this match the Hebden Bridge players were able to witness first-hand what they will be up against in  their next two matches (both away) as Todmorden ‘A’ hosted Halifax ‘A’. These teams finished in the top   two positions last season and have shared the last two championships between them. Surely this would be a tight match which would have be significant to the destiny of the title again this season. Well, one of those assumptions was correct. It was important for the title but the match was not at all close.

Todmorden simply blew Halifax away with a dominant show of force. On board 5 Dave Patrick was on top against Scott Gornall very early on and polished him off in pretty short order.  Not too long after this Andrew Clarkson completed a fine win using his trusty Scotch Game against Sam Scurfield on board 4. Next to fall was Bill Somerset who finally succumbed to Martin Hamer on board 1 in what looked to be a pretty tight encounter. Later it was 4 — 0 to Todmorden when Bill Porter blundered an exchange to Pete Mulleady and was almost immediately lost. Finally, when nearly everyone else had gone home, Darwin Ursal salvaged some pride for the visitors by playing on and on against Phil Cook who eventually lost on time despite having a winning position on the board. Halifax will now have to try and reverse this results when the team meet again at Lee Mount in the New Year.

At the other end of the table Belgrave hosted Brighouse. These two teams have tended to reside in the lower reaches of the table for the last few seasons .and so this fixture was always likely to be an important opportunity to get some points on the board. In the event both teams di for the match was drawn despite Brighouse arriving with only 4 players. There was a draw on board 1 between Ian Hunter and Dennis Breen but wins for Robert Broadbent against Karim Khan and Paul Whitehouse against Malcolm Corbett cancelled out the default on board 5 and Gordon Farrar’s win against Nick Hudson on board 2.

The Huddersfield versus Halifax ‘B’ match was postponed last so the league table currently has Todmorden ‘A’ sitting pretty at the top of the tree having beaten one of their closest rivals convincingly. Huddersfield will join them on 4 points should they win that home fixture in hand against Halifax. Hebden Bridge ‘A’ currently sit second based on their board count and Halifax ‘A’ and Todmorden ‘B’ sit with them on 2 match points.

The next round of fixtures sees Hebden ‘A’ travel to Halifax ‘A’ and Todmorden ‘A’ joining them at the Lee Mount Club to face Halifax ‘B’. Brighouse host Todmorden ‘B’ (will there be ten players for that one?) and Huddersfield host Belgrave on the Wednesday.

This week League 2 saw Hebden Bridge ‘C’ host Courier at home while Hebden Bridge ‘B’ travelled to Halifax ‘D’. Let’s start with the ‘B’ team who arrived at Halifax with only four players. Despite donating a board to their opponents, Martin Syrett’s man were too strong for Halifax and ran out 2 — 3 winners even after Neil Bamford had succumbed to Mac Randhawa. Wins by Andy Leatherbarrow, captain Syrett and Alex Brown were enough for Hebden to clinch the tie.

Meanwhile a Hebden Bridge ‘C’ team largely populated with juniors took on an experienced side from Courier. John Kerrane reports on that match:

All the youngsters started well, but as the games wore on, the greater experience of their opponents began to tell, and the match swung Courier’s way. The exception was 16-year-old Owen Buchan on board 2, who caught his opponent’s queen in an opening trap, and converted this considerable advantage into a win. However, the rest of the team were less fortunate, and the match ended with a 3½-1½ win to the courier side.

These two results leave the Hebden teams at opposite ends of the table. Hebden ‘B’ top the table with one board point more than Halifax ‘C’ while Hebden ‘C’ are at the foot of the league alongside Halifax ‘D’.

2 Responses to “Blunderfest at Todmorden”