It’s the premium event in the British chess calendar (ok we now have a super Grandmaster tournament to look forward to in December in London as well but that’s a bit different) and it just got started yesterday. The British Chess Championships are taking place down the M1 in Sheffield this year. The location couldn’t be much more enticing for Calderdale players and there will no doubt be several taking part in the host of different competitions. This year I list myself amongst their number. I won’t be travelling down until the second week as I’m playing in the Under 160 Championship and also in the afternoon open tournament taking place in week 2. I can’t wait!

I have no idea how much opportunity I’ll get to watch the Championship itself but hopefully I will get a chance. The British Chess Federation has done a great job getting sponsorship in this year and that must have played a big part in enticing the strongest line up for years. The charge is led by reigning champion and British number 1, Michael Adams. He is joined by Nigel Short, David Howell, Gawain Jones and Nicholas Pert to complete the top five rated players but there are also another 6 Grandmasters competing. It should be a fantastic competition and if any of you are off work I highly recommend a day trip to Sheffield to catch one of the rounds as the atmosphere is always great. If you can’t make it to Sheffield then you can watch the top games (hopefully 14 boards) live here. The rounds start at 2.15pm everyday and finish on Friday the 5th with a rest day this Sunday. 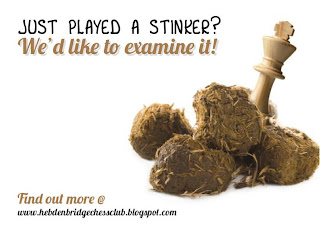 Whilst the top players scrap it out in the main event there will be hundreds of club level players fighting it out for the honours in a range of competitions for various standards of player and age group. This is where I’ll be next week. Hundreds of games will be contested. Usually many of these would go unnoticed and unloved accept by the players who played them. This year Hebden Bridge Chess Club would like to try and change all that by giving some of the plucky losers a chance to get their name in lights.

It’s for this reason that I’ve decided to put up some awards to celebrate the worst of British chess. Competitors in the Championships will be able to submit their games to compete for 3 ‘prestigious’ awards:

You can find out more about these awards and see any entries that I receive over the two weeks on a new page that I’ve set up specifically for the purpose. It’s just a bit of fun but I hope we’ll get the chance to give some club level players at the Championships a bit of the limelight. If you know anyone who’s taking part over the next two weeks please let them know about this competition and help us celebrate the worst of British chess!

Of course I’d like to think that none of my games will find their way onto this new page but somehow I figure that will be unlikely. I can guarantee readers that they won’t miss a beat though because during week 2 I will be posting a daily diary on these pages and publishing all my games, good or bad as well as my reflections on the rest of the goings on at Ponds Forge.

I’ve also been building up a wealth of blog post material to publish in week 2 so there will be lots and lots of new content during the course of next week. Be sure to come back regularly for updates and entertainment as some of our columnists will be making appearances to help celebrate the championships. It should be fun.