In the elysium of sleep a new missive has come to me from our patron goddess: 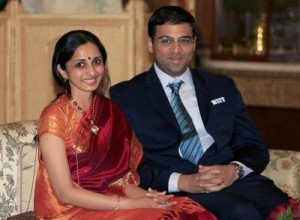 “In 1996, the players at the VSB tournament in Amsterdam sent me a card for my wedding with this dedication, ‘Anand congrats on your wedding. You were a great player, now be ready to lose 50 points.’” — Viswanathan Anand

If you are in a long term relationship or have tied the knot it’s particularly important to observe the Golden Rule . Unless you’ve taken the highly practical, but most unusual step, of marrying another chess addict your partner will not want to be regaled about the subtleties of last night’s rook and pawn ending over coffee and Cornflakes the next morning. Once you are in a relationship it can be particularly hard to establish and maintain suitable boundaries between your relationship and your chess addiction. Learn from the tragi-comic story of Marcel Duchamp and set your boundaries appropriately.

Chess mania is certainly capable of causing marital disharmony. No cautionary tale is more graphic than that of artist and chess player Marcel Duchamp who, having already succumbed completely to his own chess addiction, made the rather naive decision to get hitched to a lady called Lydie Sarrazin-Levassor in 1927. On their honeymoon in the south of France he immediately proceeded to commit a heinous infidelity by spending most of his time playing games at the Nice Chess Club and studying problems (“self mates” I imagine!) in their hotel suite. Finally, his irate bride decided that enough was enough and glued his chess pieces to their board whilst he was asleep! The marriage only lasted three months after which Duchamp was able, once again, to devote himself entirely to his jealous and demanding “mistress” — 23/09/10