This week our patron goddess has explained to me why beauty will always play second fiddle to pragmatism over the chess board. Listen and learn ye hapless amateurs. 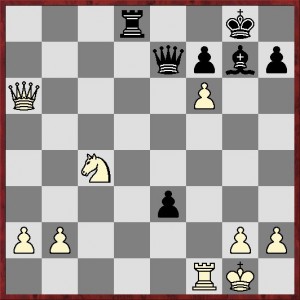 #6: No Beauty Without Truth

“Without error there can be no brilliancy”
— Emanuel Lasker

There are no prizes for artistic merit in chess. Not last time I looked any way. A pretty combination that doesn’t work isn’t really pretty. It’s just wrong and you shouldn’t have played it. Don’t try to convince yourself otherwise.

For example look at this position which Christian Hesse brings to our attention in his luminary book “The Joys of Chess”. Black now perceived that he could give up his queen by playing 26…e2 and after 27.fxe7 Bd4+ White resigned in dismay.

So was Black’s concept beautiful? Some would say so. However, had White not been an imbecile he would have noticed that after 28.Ne3 it would have been he who was winning. In the end Black won with an incorrect idea that his opponent didn’t have the talent to exploit. That’s not beautiful it’s just a mistake going unpunished and that is what really wins chess games.