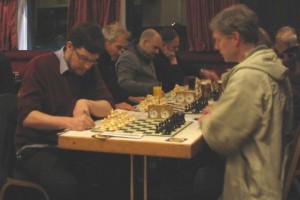 Hebden Bridge Chess Club will again host this competition this year. It will be held at The Trades Club, Holme Street, Hebden Bridge.

As always we’d like to encourage as many players as possible from across Calderdale to take part. Here are all the details for this year’s competition:

Schedule
The Championship is a five round Swiss tournament and will be held on the following dates:

Pairings
Pairings will be displayed at 7:30 p.m. and each round will start at 7:45 p.m. Re-pairings will be made at 8:15 p.m. If a player fails to arrive by 8:15 p.m. they will be assumed not to be playing in that round. Objections to the draw should be made at the League A.G.M.

Mobile phones
Mobile phones must be turned off or set to silent mode within the playing hall.  If a player’s phone rings during their game, they will be automatically disqualified.

How to enter
Please contact John Kerrane if you would like to enter via
Tel: 01422 842 426
Email hebdenbridgechessclub@gmail.com
Entries should be registered by Sunday 8th November 2015 at the latest.