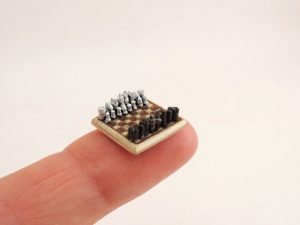 Round 2 of the Calderdale Individual Championship saw more than its fair share of miniatures and none of them were of the type shown in the picture!

On Monday the 4th of December Round 2 of the Calderdale Individual Championship took place at the Trades Club. From a kibitzers perspective it was probably a joy to behold as no fewer than five of the fifteen games played ended in bloodshed in fewer than twenty moves. Another three games ended in fewer than thirty moves. From the point of view of a participant however, such a paucity of genuinely competitive encounters was a disappointment.

Sadly, the evening got off to a bad start when arbiter John Kerrane was forced to do a repairing when the top seed, Matthew Parsons and the second seed, Mitchell Burke, didn’t turn up. Matthew had gotten his diary mixed up it later transpired but no one knows what happened to Mitchell. Both have now withdrawn from the competition.

The result of this early set back was that Martin Syrett and Mike Barnett were re-paired to face each other instead of their more illustrious rivals. This at least produced one of the games of the night as, with reduced time on the clock and a complex position on the board, these two fought until the very end of the evening’s play and were the last to finish. Mike had a decisive advantage on the board but had hardly any time left on the clock and felt compelled to offer Martin a draw, which of course he accepted.

Elsewhere the action was over all too swiftly. On board 3 Angel Gonzales, normally such an obdurate adversary, made a hash of his opening and then blundered a mate in one on move eleven against Dave Shapland. Steve Harrington mated young Freddie Bortoletto on move fourteen and Bill Joyce resigned to Neil Bamford on move thirteen when he overlooked a skewer of his queen to his king. Alfie Dermo also blundered into a mate in one on move twelve against his junior team mate Luca Curry. These four games were over in under 30 minutes.

There were a few other games that were completed not too long after that as well! At move eight Toby Dodd seemed to have an unexciting but perfectly acceptable position against Martha Leggett but he completely self-destructed and resigned just 10 moves later with his position a smoldering ruin. This was an excellent result for Martha who finished the game clinically. Similarly, Martin O’Keefe seemed to be doing just fine against Richard Bedford until he over looked a tactic which cost him a piece and then, as often happens, one mistake followed another as Martin resigned on move twenty-one with his position overrun. Finally, the game was also prematurely terminated by a blunder in the match up between Richard Porter and Marc Turu. This time Marc went for an attack on Richard’s queen overlooking a nasty intermezzo which forced checkmate in three moves.

All of the games mentioned above can be found in the game viewer at the end of this post. A couple of games for which we don’t have the score were also over reasonably swiftly. Jon-Paul Ellis’ win against Gwilem Hughes and Juliet Hadari’s draw with Richard Bottomley (she should really have won that game which would have been an outstanding result) were also complete before half the evening’s play had expired.

By now the number of games still in play were pretty thin on the ground. These though were the more competitive and interesting encounters in the round. Geoff Ainsley (returning to Calderdale Chess after a number of years away) brought his game to conclusion satisfactorily against another member of the junior contingent and Nick Sykes found himself unable to get anything more than a draw with the Black pieces out of Paul Gledhill.

The remaining games lasted much longer into the evening. John Allan slowly ground down Chris Edwards who of course had given Matthew Parsons such a tough game in round 1. John collected a couple of pawns and then simply exchanged off material to convert an endgame. Phil Cook’s win over Scott Gornall was slightly more tactical in nature as he a rook and two pawns for two pieces and the initiative. After that he went pawn hunting and soon had four connected passed pawns on the king’s side. This was more than enough to seal the deal.

Finally, Vivienne Webster and Pete Leonard played out a topsy-turvey game with the advantage switching frequently from one side to the other. In the end it was Vivienne who committed the last mistake of the game when she allowed Pete to double his rooks on the seventh rank in the end game. She could still have put up spirited resistance but instead, in a moment that was rather symbolic for this round of matches, Vivienne blundered a mate in one on move fourty-seven.

All of this means that there are just four players on 2 points after two rounds. Reigning champion Phil Cook, last year’s runner-up Dave Shapland, Richard Porter and Pete Leonard. These four are followed by another seven players on 1½.

Below are the full results for round 2 and at the foot of the post is the game viewer.