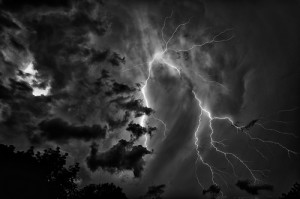 It’s lightning time again on Monday the 13th at the Belgrave Social Club. This image is used under Creative Commons terms and is sourced form gleasonmj’s Flickr photostream

The Calderdale Evening Chess League Team Lightning tournament takes place on Monday the 13th of May. The competition will again take place at the Belgrave Social Club in Halifax. Anyone wishing to take part should be sure to arrive at the venue promptly for 7.30pm in order to enable team captains to organise their squads of 5. Any players not initially allocated to a team from their home club will be used to fill vacancies in other club sides or form ad hoc squads. In this way everyone who turns up will be able to take part.

If you’ve never played lightning chess before it’s great fun. Here is a quick explaination of the rules. Normal rules of chess except that a buzzer sounds every 10 seconds and players must move in turn on the buzzer. Persistent failiure to do this can result in forfeiting the game. Also check does not have to be announced and kings can be captured to end the game if a check is overlooked.