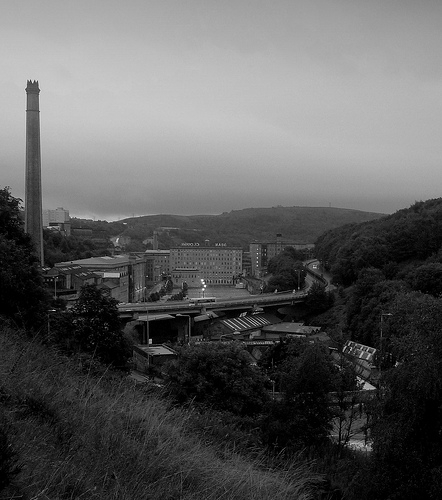 Last week Hebden Bridge’s title holders enjoyed a similarly picturesque view over Halifax as they pulled of an unlikely and brilliant victory. This image is used under Creative Commons terms and is sourced from david_pics’ Flickr photo stream

It was another night of high drama and high quality chess in Calderdale League 1 on Monday night as reigning champions, Hebden Bridge ‘A’ travelled to Halifax to take on a newly modified and super-strong Halifax ‘A’ team.

Halifax Chess Club have been building a formidable line-up over the last couple of seasons and are rightly ambitious to succeed in the Calderdale top flight. First of all came Bill Somerset half way through the 2011-12 campaign to help carry the ‘A’ team back to league 1. In 2012-13 he was joined by Darwin Ursal, back after a year’s sabbatical at Hebden Bridge which helped them to win the title that season. Halifax performed very well in their return season but they didn’t quite have the strength in depth through the whole team to sustain their challenge and were too reliant on their top two boards.

Then, this season they added Winston Williams to their top board as well as Sam Scurfield to their lower order and in doing so they have transformed themselves into genuine title contenders. On Monday night their average YCA rating was 168 compared to Hebden’s 156.

The Hebden team were rightly anxious about the match but they could draw some comfort from the return of their own board 1, Matthew Parsons, which meant that, for the first time this season, they had all five players from last season’s regular title winning line up available. They aren’t the strongest side in the league on paper but they are certainly one of the most tenacious and in the last 12 months the line up of Parsons, Leonard, Leatherbarrow, Sykes and Shapland has scored a perfect record of 7 wins out of 7 against some of the most ferocious opposition the league has to offer. Could they over turn the odds once again?

As is so often the case with Hebden their away matches seem to be less stressful than their home encounters. In the last 18 months they’ve lost just two matches and both of those were at home. Once again on Monday they operated the Black pieces with some skill in the early part of the game and this established a good platform for them to build on during the evening.

The only Hebden player who seemed to be struggling out of the opening was Dave Shapland on board 5. He’d ventured 1…d6 to try and dissuade Scott Gornall from playing the London System. This worked but Scott transposed cunningly into a Pirc Defence when he played 4.e4 and after that it became apparent he was more familiar with the opening ideas than Dave was. The Hebden man was tempted into playing too ambitiously and he got himself into a mess. However, just when it seemed he was going to get punished by his opponents superior development and active pieces he unearthed a shocking and unexpected resource that, whilst being objectively unsound was quite hard to unpick at the board. Scott responded inaccurately and Dave was then able to hold the balance into dynamically balanced end game.

Elsewhere, Nick Sykes had courageously ventured the Kings Indian Defence against one of the league’s most skilled exponents of the variation, Darwin Ursal. It’s always interesting to see how a player will react when faced with one of their own pet systems and Darwin intelligently and wary of Nick’s opening preparation, decided not to engage in the Samisch Variation but play more conservatively with the fianchetto line. This worked to the extent that Nick was less familiar with the ideas and it enabled Darwin to demonstrate the gulf between the two players’ ratings with some superior middle game play. In the end he simply improved his position, pounced on a couple of inaccurate moves by Nick and ground out the win. Halifax had taken the lead that the statistics suggested they would.

That was as far as they got however for the other four games were played on and on into the evening. The board 1 encounter was truly epic in proportions. Winston demonstrated his desire to avoid orthodox opening play by beginning with the move 1.c3!? Matthew then played actively and precisely to obtain a highly complex but favourable position and eventually was able to convert this to an endgame where he had two knights and a rook against Winston’s two rooks and an extra pawn. Normally the two rooks would do well with an extra pawn but here the foot soldier in question was doubled on the h-file and Matthew was then able to exchange off one of Winston’s rooks. Slowly Matthew position improved and, with the end game accelerating into the night the players passed 100 moves but Matthews’s position just got better and better until Winston was compelled to resign. One all.

Board 2 finished next and the result was another surprise for the hosts as Pete Leonard grabbed a very hot pawn in the opening against Bill Somerset but managed to hold onto it in a highly theoretical and complicated Grunfeld Defence. Bill seemed to be gaining the upper hand in the middle game with his superior development and activity but at some point he failed to find the best way to press for the advantage and Pete managed to advance his passed a and b pawns. The players exchanged inaccurate moves in time trouble but it was Pete that emerged from the scramble in better shape and when the dust settled Bill saw that there was no hope and waved the white flag.

Now Hebden just needed to draw out the bottom two boards to win the match. On board 4 Andy Leatherbarrow had deployed the Scandinavian against Sam Scurfield. The game followed a trendy variation that Andy is well versed in and Sam did not manage to gain any sort of advantage. An endgame with queens and a rook each was reached and Andy managed to grab a pawn before getting the queen’s off. This left him in a position where he couldn’t really lose but could play on for a win and he tried his best to do just that as the top two boards remained unclear. However, the ending was far from easy to win as all the pawns were on the same side of the board. Eventually as the top two boards did end in Hebden’s favour Andy faltered and dropped his extra pawn. The players then concluded peace.

This just left board 5 to finish. Dave Shapland had managed to gain a symbolic advantage in his ending and was also the only player gunning for a win. However, both he and Scott were now running out of time to complete their game and with Scott reduced to passive defence, Dave accepted the offer of a draw that sealed another famous win for Hebden to follow up on their last round victory over Todmorden ‘A’.

The individual scores at the end of the match looked like this:

Whilst the ‘A’ team were locked in a crucial tie at the top of the table Hebden Bridge ‘B’ were engaged in a relegation dog fight away to Todmorden ‘B’. John Kerrane briefly described a disappointing night for Hebden in a match they really needed to win if they wanted to beat the drop.

Hebden Bridge ‘B’ did not fare so well against Todmorden ‘B’, going down 3½ — 1½, despite, early in the match, looking as though they would achieve at least a draw. However, despite captain Martin Syrett’s win on board 3, the advantage seemed to slip from the other players, and in the end, Todmorden ‘B’ deserved their victory.”

In the other match played on Monday Todmorden ‘A’ bounced back from their disappointment at the Trades Club last time out to efficiently dispatch Courier ‘A’ at home despite missing their regular board 1 player Martin Hamer. Andrew Clarkson beat John Morgan on board 2 and David Innes beat Peter Hughes on board 5 as the other three boards were drawn.

Then on Wednesday night came the scarcely believable tale that Huddersfield had been defeated at home by Brighouse, not just beaten, thrashed 1 — 4! The next day the league website confirmed the result and added in the details that Mitchell Burke went down to Robert Broadbent on board 1, Robert Sutcliffe lost to Ron Grandage on board 5 and Bruce Bendall beat Dave Tooley on board 3 to complete a wonderful performance from Brighouse.

That result leaves Hebden ‘A’ and Todmorden ‘A’ on the same number of points (8) at the top of the table (though Tod lead on superior board score). Huddersfield and Halifax have 7 points and face Hebden and Todmorden ‘A’ away respectively in their next matches. This pairing of the top four teams could well help Courier ‘A’ as they play Hebden ‘B’ and currently have 6 points. A win could see them gain back some ground on the leaders.

At the bottom Todmorden ‘B’ have now got off the mark at Hebden ‘B’s expense but it’s still all to play for as, even with Brighouse’s surprise win at Huddersfield, Hebden are still be within a single victory of both their relegation rivals. Two of these three will go down, that much is almost certain. The only question is “which two?”

3 Responses to “Champions fly high to bring down Halifax”