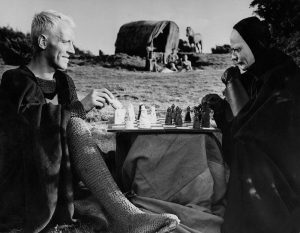 Ingmar Bergmans’ ‘The Seventh Seal’ contains the most iconic chess game in cinematic history. At it’s heart Max Von Sydow’s character chooses to answer our question for today: “Chess or extinction?” with the answer “Chess”. Which of us wouldn’t do the same?

On Monday night patrons of the Golden Lion in Todmorden were greeted with this seemingly stark ultimatum as they entered the premises. The occasion was the first local derby match of the Calderdale Evening Chess League season between Hebden Bridge ‘A’ and Hebden Bridge ‘B’ and the alternative on offer was an ‘Extinction Rebellion’ group meeting taking place upstairs. Our genial host merrily posited these two options from behind the bar to any customer who she didn’t really recognise. It didn’t fail to raise a chuckle from the chess players, who were in the know, and quizzically alarmed looks from genuine newcomers.

It’s the kind of scenario that can only really happen out at the Golden Lion. On Monday what could turn out to be one of the most serious and earnest chess matches of the season was punctuated by musical interludes from the bar next door. Funky breaks and wailing guitar solos were in plentiful supply. It could have been off-putting (and possibly would have been at another venue) but at the Golden Lion pretty much all the players seemed to be bobbing their heads in appreciation and even humming the tunes to themselves at some point. It certainly didn’t seem to adversely affect the standard of the chess being played, which was pretty high.

Last year, the Hebden Bridge based team beat the Todmorden based team not only in the corresponding fixture but to the title too. The Golden Lion fraternity had a desperately awful start to the season last year, drawing one and losing four of their first five matches. They were not helped by having some lower rated players on boards 4 and 5 early for the early matches before the roster stabilised. This time around, with Hebden Bridge ‘C’ having been relegated last year and a few new players arriving at the club, the ‘B’ team is stronger. Much stronger. Ferociously strong. The five players in the line-up on Monday sported an average ECF rating of 174.8!! Those five in order were Martyn Hamer; the Calderdale Individual Champion of the last three seasons, Phil Cook; Andrew Clarkson; Sam Swain and Richard ‘Beaky’ Bedford. It’s got to be one of the strongest lines-ups ever fielded in the league – certainly it is just about the strongest your correspondent has ever seen.

The reigning champions had strengthened their line up too! They boasted an average rating of 172.8 and were comprised of Matthew Parsons; Calderdale League debutant, Stavros Pantazopoulos; Dave Shapland, Andy Leatherbarrow and Neil Suttie. With the two teams so closely matched it was bound to be a tight, tense and enthralling match. It also promised to be a very late night, and that was exactly how it turned out.

The ‘A’ team playing White, did their best to try and exploit their ‘advantage’ in the early stage of the evening. On board 1, Matthew and Martyn duelled in Matthew’s favorite London System. The early exchanges were very cagey and Matthew appeared to get very little from the opening despite his best efforts. On board 2 it was a different story as Phil met Stavro’s 1.d4 and 2.c4 with a very unorthodox approach. It cost him a pawn early on and it wasn’t clear if it was a gambit or a blunder, but it certainly led to some unclear and unusual positions. More importantly, it caused Stavros to start thinking hard and, with him playing the relatively short evening league time limits for the first time, he soon got very behind on the clock.

Dave Shapland sprang a surprise on Andrew Clarkson on board 3 – well maybe it was, maybe it wasn’t – as he decided to take on Andrew’s Grunfeld rather than having yet another go at his Pirc which he has never yet been able to defeat. Inspired by some recent games from the FIDE World Cup, Dave played the first moves of the mainline exchange variation and then selected an offbeat continuation with 8.Bb5+. He succeeded in stabilising his pawn centre and getting his pieces developed onto active squares in the opening while Andrew was given some problems to solve from the early stages.

Andy Leatherbarrow and Sam Swain contested an English Opening in which the centre of the board soon become rather blocked with pawns. Both players switched their efforts to counter attacks on opposite flanks with Sam playing f5 and Andy playing b4 to try and break the position open in their favour.
Finally, on board 5, Neil and Beaky contested the latter’s favoured Nimzowitsch Defence. This too was a very tense game in the early stages with Beaky gradually manoeuvring his pieces over to the king’s side to build what looked like a dangerous attack.

For much of the night it was really difficult to see which way the match would go as all the boards seemed rather unclear. Slowly but surely though, the games started to resolve themselves. The first to finish was the board 2 match where Stavros found himself with a rook and pawn versus Phil’s knight and bishop. He also found himself very short of time as early as move 20! Phil too had consumed a fair deal of time and the end of the game demonstrated the tension of the encounter and the pressure of the clock as Stavros overlooked a move that would have secured him the advantage and instead actually handed Phil with a winning opportunity. However, Phil in turn missed his opportunity as he opted to sacrifice a bishop to force a perpetual check and the game ended abruptly in a draw. This was a rather curious but by no means bad game.

The game on board 1 finished next with both players choosing not to take any undue risks although it looked like they explored some interesting possibilities in the post-mortem. There’s a health respect between Matthew and Martyn who have both won games from each other in the past. This time it was a draw.

The home side took the lead shortly afterwards when Sam beat Andy on board 4. In a very complicated middle game, Sam finally succeeded in opening up the position in the centre and damaging the White king’s protective shield. Meanwhile, Andy opened the b-file for his heavy pieces. It would appear that this scenario favoured Black because, by the time Andy had decided on a tactical approach with 24.Re6!? it looks like he was already in trouble. Sam found the right solution to the problem and emerged an exchange up. Andy didn’t have enough compensation and his king was too exposed to try and mount a serious counter-attack. Sam snuffed out any counter play and mopped up efficiently. 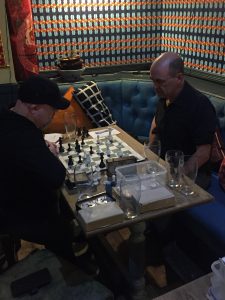 I often think you can measure the intensity and drama of a chess game by the number of pints consumed by the players. The game between Neil and Beaky was clearly a ‘six pint’ game, which says it all really.

The champions struck back on board 3 where Dave’s initiative against Andrew built up into a strong attack. Andrew may have missed a couple of fleeting opportunities to defend himself more robustly but generally the position was much harder for Black to play than White and once Dave had been able to initiate a rook lift and transfer his queen to the h-file it was all over bar the king hunt as Andrew’s monarch staggered drunkenly up the board as far as d5 in the vain hope of finding a refuge.

And that meant that the outcome of the match would be settled by the board 5 encounter. As the rest of the players gathered around it was far from clear who was better if anyone. Both Neil and Richard burned their clocks down to almost nothing before the time control and then almost as soon as they’d had their 15 minutes added, they slowed down their rate of play and got into time trouble again!

It’s clear from the game analysis that the pendulum swung between these two several times during the game but in the end the game and the match was decided when Beaky over-stepped the time limit and sportingly pointed it out himself. By that point Neil seemed to have secured a winning advantage anyway.

Here’s the final score card from what was a fabulous match full of interesting play and you can find four of the five games with some annotations in the game viewer at the bottom of this post.

Elsewhere on Monday night Huddersfield ‘A’ were busy putting Brighouse to the sword in much the same fashion that Hebden Bridge ‘A’ had done in round 1. The score was ½ – 4½ and this time it was Robert Broadbent on board 1 who salvaged Brighouse’s pride by holding Greg Eagleton to a draw. Nick Sykes, Alec Ward, Steve Westmoreland and David Booth all won their games.

At the Lee Mount Cllub in Halifax, Halifax ‘A’ were rustling up a highly convincing victory against last season’s runners up, Belgrave ‘A’. Certainly, Belgrave were weaker for this match than they had been for their first-round match, missing Tony Slinger and Colin Proctor as they were. Into the breach stepped Malcolm Corbett and Steve Harrington. Halifax meanwhile welcomed back Richard Porter to board 3 and this strengthened their line up enough for them to be higher rated on all five boards. The home team won on all three of the top boards as Darwin Ursal, Winston Williams and the afore mentioned Richard Porter beat John Morgan, Dave Patrick and Malcolm Corbett respectively. Karim Khan and Steve Harrington held their adversaries, Carlos Velosa and Vivienne Webster to draws as Halifax romped home 4 – 1.

In round 3 it will be the reigning champions turn to sit it out as Halifax will be given the chance to go top on their own if they beat Belgrave ‘B’ away.