Happy New Year chess friends! I hope that you enjoyed the festive period and didn’t get too many chess withdrawal symptoms. As 2011 dawns many of us will be reflecting on the year just gone and the new one that is ahead. In that spirit of reflection (and baring in mind the wise words of the Oracle of Delphi – “Know thyself”) today I offer readers a timely opportunity to assess their chess style in preparation for the battles that await.

At this blog we do our upmost to bring Hebden Bridge Chess Club members the very finest and most interesting chess related curios from wherever they may be found. A little while ago I stumbled upon this survey which is designed to help you test your aggression levels at the chess board. It was originally published in chess magazine ‘The Gambit’ (the quarterly publication of the North Carolina Chess Association) in the May-June,1990 issue. To spice the fun up further I’ve added in some fun chess cartoons that I accumulated recently.

“We all know that chess is a war game, and while some of us go at it on the boards like cerebral Rambos (nice oxymoron, that) others play like, well, George McGoverns. Just how aggressive are you? Do you go for broke or wait for your opponent to make that big mistake? The following test is scientifically designed to rank your aggressive tendencies on the board. Total the numbers at the end of the text to put yourself between Morphy and Steinitz.”

1.) Early in the game, your opponent collapses of an apparent heart attack. His wife and children gather round, and after exchanging tearful farewells with them, he looks up, and with life fading from his eyes, asks you for a draw. In response, you:

a.) Accept immediately
b.) Analyze the position on the board first
c.) Ask the TD to get a doctor to confirm that he isn’t faking it
d.) Tell him that you wouldn’t give a draw to your dying mother, whom you love
e.) Try to push him over the edge by announcing mate in three

2.) When psyching yourself up for a game, you visualise yourself:

3.) You view your opponent’s pawns as:

a.) Potential queens
b.) The shape of his position
c.) Juicy morsels to be gobbled up
d.) Speed bumps 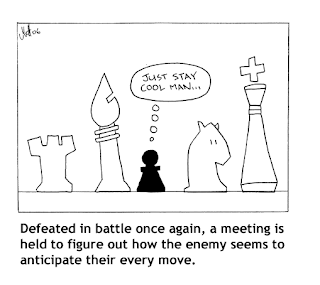 a.) Potential queens
b.) An integral part of your strategy
c.) Expendables in your king’s side attacks
d.) Howitzer shells

5.) You will consider a pawn rush only:

a.) When you have safely castled on the opposite wing
b.) When playing a lower rated player
c.) When you have more than a piece advantage
d.) When it’s your turn to move

a.) When the queens are off the board
b.) Sometimes unavoidable
c.) When your opponent won’t resign

d.) For weenies who can’t finish off their opponents in the middlegame

7.) You are playing an 8 year old, who leaves his queen hanging in a complex position. He begins to cry. Your response is:

a.) Offer to stop the clock while he regains his composure
b.) Capture the queen without comment
c.) Pick up the queen with a chuckle and remark, ”Won’t be long now!”
d.) Call the child’s mother over and tell her to take her baby home, because he’s not ready to be a chess player

8.) After leaving your own queen hanging against an 8 year old you would:

a.) Resign gratefully and offer congratulations for a great win
b.) Smile knowingly and bluff him into not capturing her
c.) Announce mate in nine
d.) Tell him of an obscure rule about taking back moves that he’s too young to know about

9.) You will only sacrifice your queen only:

a.) When you see a forced mate
b.) As a last attempt in a lost position
c.) For an overwhelming positional advantage
d.) When she hasn’t been active enough (use it or lose it baby!)

10.) For an open file on your opponent’s king’s side you would sacrifice:

12.) When you first spot a winning combination, you:

a.) Look for ways your opponent can get out of it
b.) Look at your clock to see how much time you can spend checking it out
c.) Giggle uncontrollably
d.) Drool

Now that you’ve picked your answers tally up your score by selecting the appropriate value for each of your answers.

Now find out what kind of player you are below.

Score of 0-10: You are a Conscientious Objector
You are a pacifist in the war game of chess. Negotiating a draw is your biggest thrill. Should you accidentally win, you feel obliged to buy them lunch or give them some other form of foreign aid.

Score of 11 to 30: You are an Innocent Bystander
You’ll pick up wins if they fall into your lap (and happen to stick). You look for traps in a mate in one.

Score 31 to 50: You are a Reluctant Aggressor
The George Bush (post thyroid treatment) of the Royal Game. You’ll do the “aggression thing” when backed into a corner, or when your wife tells you its time to leave and you can finish your stupid game. (Yes dear).

Score 51 to 62: You are a Psycho
A danger to yourself and others. You don’t play defences, just offenses minus the tempo. You like lines with names like “the can opener”, “the beserker” or “the long whip variation”. At home you kill small animals or unrated players for fun.