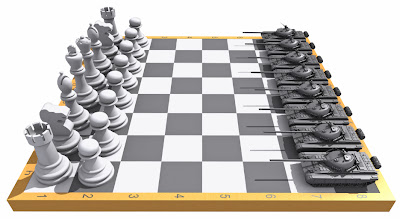 I can offer readers a veritable tumult of reports and games because today we chronicle the heroic efforts of all four of Hebden Bridge Chess Club’s teams as they rode gallantly into battle for the last time this season on Monday night. The fixtures secretary has thrown some curve balls at us this year including the playing of all four of our derby matches on dates other then the opening nights of each half of the season; round 4 of the Calderdale Individual Championships on Valentine’s night; and, most testing of all, the opening and closing fixtures in both divisions played on the same night. This meant that our hard pressed Captains had to find 20 players between them and even for a club of our size, that is no easy task when it’s school holiday week. I’m delighted to report that all four teams did sport full line-ups even though we had to tap into all sorts of rarely plumbed resources!

I’ll start with Hebden Bridge ‘B’ who, you may remember, managed a tense 3-2 victory in their match with Belgrave two weeks ago to haul themselves out of the relegation zone. They needed to match Halifax ‘A’s result at bottom side Todmorden ‘A’ in order to be sure of safety and a draw in conjunction with a Halifax win would have left the teams needing to be separated by their board count. John Kerrane reports for us on the unfolding of the night’s events at Brighouse.

“With both sides missing key stronger players, it was an unusual match, but in the end, Hebden Bridge ‘B’ avoided relegation in fine style with a 3-2 win, led by Dave Shapland on board 1, who played his favorite Classical Defence against Robert Broadbent’s Spanish Opening, and conducted a vigorous attack culminating in a very attractive mate.”

It was a noble decision by Captain Martin Syrett to stand aside and let Phil Rhami play a game. But, as the ‘B’ team struggled to put together a full side themselves Phil (who also stepped in to play the away fixture against Huddersfield) travelled from Leeds to take part in the tie and therefore deserved his spot. Essentially he was the hero of the hour for, by turning up and playing a game, he essentially scored Hebden 1½ points. His draw with Nick Hudson was resourcefully played after a highly provocative opening treatment almost got him into very hot water.

The second game to finish was Dave Shapland’s effort against Robert Broadbent. He equalised fairly swiftly and then capitalised on his opponents manouevring play before connecting at the end with a destructive mating combination utilising two bishops and two rooks. The notes in the game viewer below are Daves.

Next John Kerrane succumbed to Paul Whitehouse after a long struggle and this left the match in the balance with just Andy Leatherbarrow’s game against Bruce Bendall to finish. Most club members will know about Andy’s predilection for long distance affairs and his dalliance with time trouble. He stayed true to his code in this game as he used up all but one minute of his time to get to move 36 and then a good deal of his remaining 15 minutes to get to the end of the game. All the while poor Martin Syrett tried to calm his palpitations as he looked on from the sidelines! In the end Bruce decided that he could not make any progress and offered Andy a draw which Andy accepted and the match was won for the ‘B’ team.

This excellent result meant that the ‘B’s were safe and could go home in a happy mood. As it turned out, Todmorden beat Halifax by the surprising margin of 4-1 and so even a defeat would not have damaged Hebden Bridge’s status. Never-the-less congratulations are in order for when the proverbial ordure hit the fan this season the ‘B’ team showed their Dunkirk spirit and did their jobs in their last two matches of the season. Each player has done his bit to keep them up. Well done ‘B’s!

So now to the ‘A’ team who needed to beat Courier ‘A’ away to keep their faint title hopes alive. On paper this was a tough final round fixture for Hebden Bridge as Courier have performed solidly all season and are comfortably anchored in third place in the league. In addition, all three of their top boards are rated in the 160’s and that puts them on a parr with the big beasts at Huddersfield and Hebden Bridge. Only their weaker lower boards have prevented them from competing for the title.

In the event however, Courier were victims of the fixture secretary’s scheduling as they were only able to field 3 players and were missing their talisman, John Morgan who has secured this year’s “Most Valuable Player Award” by scoring 11½ points in 13 games as well as becoming the Calderdale Individual Champion. Regardless of their opponents charity, Hebden Bridge exacted the fullest of penalties by inflicting a traumatising 5-0 whitewash on their opponents.

Individual scores were as follows:

Dave Wedge was performing his swan song for Hebden Bridge as he leaves us this summer to pursue a new career opportunity down in Cambridge. He has been the side’s top board stalwart for many years and will be sorely missed. Fittingly he smote down Robert Clegg with his customary aplomb as his “Good bye” present.

On board 2 Matthew Parsons demonstrated his readiness to fill Dave’s very large shoes next season by doubling up on Dave Patrick for the season. Here is his game.

Team Captain, Alastair Wright completed the rout with a win against Dave Colledge.

The ‘A’ team must now sit tight and await news from Huddersfield on Maundy Thursday when the league leaders host Belgrave for the curtain closing fixture in League 1. Could it be the holiday season will deplete the resources available to one or both sides? There might yet be a one more twist in the title race. Of course we will keep our ears to the ground and let you know the result as soon as we possibly can.

Normally I’d be ending my report here but today I must ask readers to gird their loins for even more! Both of the club’s Division 2 sides were also in action on Monday. First of all, Pete Rawlings gives us news of the ‘C’ team’s home match against Huddersfield ‘B’.

“Our final match of the season gave us the double over Huddersfield ‘B’, quite a feat considering that they will beat us to second place in division 2. (Only if they win their game in hand against Halifax ‘B’: Ed.) Trevor Deluca played his first match of the season to gain us a bital point and Pete Leonard continued his near-perfect run. A great performance by the team in a good season. It would be nice to keep this team together as a unit, says their sentimental old captain.”

As Captain Rawlings rightly points out, Pete Leonard has had a superb run for the ‘C’s scoring 6 wins from 7 games. In the game below he inflicted an eye-watering humiliation upon Stuart Oliver.

The ‘C’ team match scorecard looks like this then:

Last, but by no means least, the ‘D’ team travelled to Todmorden for their last match of the season against Todmorden ‘C’. Danny Crampton’s team have suffered greatly this season as a result of sticking to their policy of fielding a side full of rookies to league chess. Encouragingly there were signs here that the side is starting to see the fruits of their patient approach as, for the first time this season, they scored two wins in a match. Matt Levy and Danny Crampton scored the points.

With young Kyle Sharpe getting his third outing in adult competition on board 2 and other team members continuing to gain good experience it would seem that the green shoots of growth and development are starting to emerge and that the ‘D’ team can be optimistic about next season. Let’s hope that the summer programme of activities and handicapped competitions will enable these players to develop their games even further.

That’s all for now folks. I’d just like to say “Thank you” to all those players who submitted games and result to me so quickly. It isn’t easy gathering everything together in two days but with your help we did it! Watch this space for details of the up and coming summer programme of informal competitions and game tutorials and don’t forget the team Lightning tournament takes place in Todmorden on the 9th of May. By way of a final word I can confirm that there will be a chess club meeting on Monday the 2nd of March when John Kerrane plans to hold an informal Lightning Competition to give players the chance to practice at this format of the game.