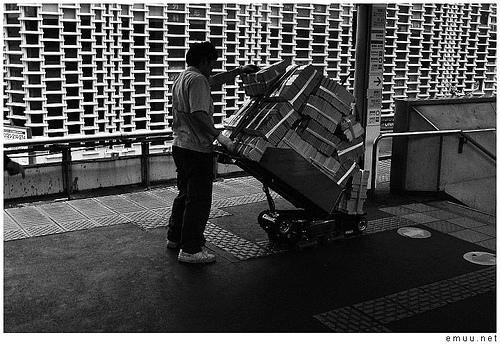 Courier dispatched a large consignment of disappointment to Hebden ‘A’ a couple of weeks ago. The image is used under Creative Commons terms and sourced from uccemebug’s Flickr photo stream

I’m afraid that our reports for recent fixtures have gotten a little behind and so today I’m publishing a report about the league 1 fixtures from two weeks ago (!) and also league 2 fixtures from last week. Hopefully we’ll catch up with this week’s matches very soon! The league 1 fixtures saw some very interesting results (for very different reasons) that will shape both the race for the title and also the battle against relegation.

Reigning champions, Hebden Bridge ‘A’ hosted their first home match of the season (their very first game was supposed to be against their ‘B’ team but that was defaulted) against Courier ‘A’. For the past two years Hebden have edged tight matches against Courier at home and drawn their away fixtures with them so it was always likely to be a tight and tense affair, the more so since Courier have made a strong bid for the title this year by fielding an even stronger side this time around. Tony Slinger had played the first two matches on board one but he was unavailable for this match and so Courier replaced him with Phil Watson who is rated 184! He was followed in the line up by John Morgan, Dave Patrick, Robert Clegg and Peter Hughes all of whom are rated in the 150’ and 160’s.

Hebden meanwhile were still without Pete Leonard and had therefore drafted in Andrew Bak again to cover for Pete’s absence. Andrew played on board 1 followed by Andy Leatherbarrow, Nick Sykes, Dave Shapland and Josh Blinkhorn. Hebden were out-rated on every board but not by such a huge margin that they should have expected a whitewash and indeed, what followed was a hard fought affair.

Hebden seemed to be doing pretty well early on. On board 1 Andrew had gained a huge space advantage against Phil’s Caro-Kann albeit without any clear means of converting that into a full point. Andy Leatherbarrow seemed to have John Morgan in all sorts of trouble on board 2. Nick Sykes and Josh Blinkhorn both had comfortable positions against their opponents and Dave Shapland and Robert Clegg were conducting yet another theoretical duel in their pet variation of the French Tarrasch — any result was therefore possible.

Sadly the evening went downhill from there on in. It began with a reversal of fortunes in the match between the two captains on board 3. Dave had managed to get some pressure but Nick’s position looked solid enough until a slight inaccuracy allowed Dave to turn the screw and eventually Nick’s position fell apart. Next, Andy was forced to accept a draw by repetition against John when his advantage slowly dissolved away. Josh too had to accept a draw when it was clear that he was hanging on in a double rook ending rather than pressing for victory.

The match all hinged on whether Andrew could find a way through Phil’s defences and Dave could hang on against Robert after his opening choice had back fired rather badly. Unfortunately only one of them succeeded. Phil knows his Caro-Kann ever so well and it wasn’t long before he’d been able to open up the king’s side, block the centre, park his king on d7 and get his rooks on the h and g files. Eventually he broke through and Andrew had to resign. Meanwhile Robert had Dave seemingly at his mercy but he took his foot off the gas and Dave was able to give back the material he’d bagged in the opening in order to equalise. At the end they agreed a draw because even a win by Dave couldn’t have saved the match for Hebden.

For Hebden this marked the beginnings of a very tough run of games. They next play Todmorden ‘A’ at home followed by Halifax away and then Huddersfield at home. If they take any points at all from those three teams it will be an excellent result.

In the meantime the confusion and uncertainty around the ‘B’ team continued. Having been reinstated to the league at the insistence of the committee (evidently the league constitution sets out that there cannot be more teams in the second division than the first) Hebden were defaulted their first two matches and asked to play their remaining fixtures. However, this was done at such short notice that Halifax ‘A’, who they were due to play last Monday, were caught on the hop and couldn’t get a team together. The result of this was not that Halifax defaulted but that Hebden did and another 0 — 5 was recorded against their names! Strange? Evidently this was due to the impossibility of re-scheduling the fixture when so many ‘B’ team players also represent the ‘C’ team who play on the weeks that League 1 teams don’t.

Elsewhere in league 1 the contenders for Hebden Bridge’s title started to make themselves known. Besides the arbitrary whitewash of the ‘B’ team there was another 5 — 0 victory as Huddersfield squashed Todmorden ‘B’ at home. The other result was similarly one-sided as Todmorden ‘A’ conceded just a single draw to Brighouse at the Todmorden Working Men’s Club.

Thee results leave Todmorden ‘A’ top of the table as the only team with a 100% record so far. It must be said however that so far they have only played the bottom three sides in the league. Nevertheless they have scored 13 out of a possible 15 board points! Halifax ‘A’ and Huddersfield are just a point behind Todmorden on 5 each. The reason for the odd point dropped was the first round draw they played out between them at Halifax. Next come Hebden Bridge and Courier on 4 points and then Brighouse, Todmorden ‘B’ and Hebden ‘B’ all have yet to score.

“Hebden Bridge Chess Club’s ‘C’ team set off to Lee Mount Social Club to play a match against Halifax ‘B’ on Monday evening, knowing they wold face a stiff test. With regular team members missing, and a default on the bottom board, it would be an uphill struggle against a strong side.

In fact, the team played well, especially new members Chris Greaves and Alex Brown on the lower boards, and they were all at least even until late in the match, but the experience and persistence of the home side saw them through to a 4-1 win. Only Captain John Kerrane on board 1 managed a consolation point for Hebden Bridge against the much higher-graded Tim Hilton.”

John is being modest in his report for his victory of Tim Hilton was very well played and comprehensive. You can take a look at this and the games from the Hebden ‘A’ vs. Courier ‘A’ match in the game viewer at the end of this post.

In other fixtures in League 2, Todmorden ‘D’ (who have either withdrawn from the league or defaulted most of their matches) did not play against Hebden Bridge ‘D’ and so we must assume a 0 — 5 score will be entered for that one though it hasn’t yet been on the league website. Halifax ‘C’ were comprehensively defeated 4 — 1 at home by Belgrave and Todmorden ‘C’ edged out Courier ‘B’ 3 — 2 at home.

All of this means that there would appear to be three teams in the division fighting seriously for the two promotion spots. Belgrave and Todmorden ‘C’ have both won four out of four and are top. Halifax ‘B’ are two point behind them having lost just one match and then come Hebden Bridge ‘C’ and Courier ‘B’ both with a 50% score. Once again there are three teams rooted to the bottom with no points scored as yet, Halifax ‘C’, Hebden ‘D’ and Todmorden ‘D’.

This last Monday night Hebden Bridge ‘A’ hosted top team Todmorden ‘A’ knowing that defeat would see them slip four points behind their rivals and probably signal the end of their title defence whilst an unlikely win would take them back level on points with their adversaries and give Huddersfield and Halifax a chance to go top of the league. We’ll publish a report on this week’s fixtures very soon.

4 Responses to “Courier deliver disappointment to the champions”