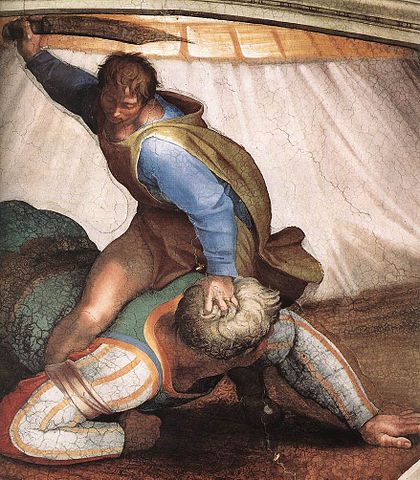 David against Goliath as depicted by Michelangelo in the Sistene Chapel

Today we begin a long-overdue catch up on the Calderdale Leagues as they approach the business end of proceedings this season. In this post we’ll get up to date with League 2 and must surely start by heralding probably the most extraordinary result that the league may ever have seen. Last month the Hebden Bridge ‘D’ team, without a win to their names this season, hosted the top team Belgrave, who had yet to lose and are ferociously focused on returning to the top flight where they feel they belong.

Belgrave might well have been forgiven for not taking the match too seriously but they have a devoted line up which they field consistently no matter who they are playing. Messrs Farrar, Corbett, Barnett, Gonzalez and Johnson were all present and correct for this encounter which only makes the match result of 3 — 2 to Hebden Bridge all the more unbelievable!

Had the ‘D’ team Captain Danny Crampton unearthed some new junior talent that bore his side to this glorious victory? No, it was largely the same team of relatively inexperienced players that he’s been blooding all season long. With the exception of Dan himself and Paul Dearden on board 3, the other players are all participating in their first league season. Moreover three of the players in the team had not yet won a single game this year. Ironically it was this very trio that secured the ‘D’s their famous victory.

The gulf in class between the teams can be appreciated simply by taking a look at the average rating of the two sides before this match. Belgrave weighed in at 142 which is a considerable average for a team in the second division. Hebden ‘D’ meanwhile averaged a puny 37! Admittedly this is skewed significantly because Martha Leggett had only played one rated game before the match and so has to count as a ‘0’ for the purposes of average rating. Nevertheless the margin between the teams was so vast that it could scarcely even be conceived that any result other than 0 — 5 would occur.

So what happened to cause this freak result? A look at the games in the viewer below gives witness to the fact that, yes, Belgrave did have a collective blunderfest of the most extraordinary proportions. However, it also shows that Hebden played in a spirited fashion and were tactically aware enough to capitalise on the opportunities that came their way.

Take the board 1 encounter for example. Dan Crampton trotted out his London System, a variation he’s played frequently enough to ensure he get’s a reasonable position out of the opening. His opponent, Gordon Farrar went for a King’s Indian type set up putting his queen on e8 and playing the e5 advance. It’s a reliable way to play against the London. It would be fair to say that Dan lost control of the centre but he’d developed his pieces sensibly and so Gordon’s advantage was minimal. It then looks like Gordon blundered (rather than sacrificed) his advanced e-pawn and suddenly Dan had a very nice position. Inevitably complications arose but Danny held himself together and swapped off material whilst retaining his extra pawn. Gordon pieces got active and he made the decision to grab the pawn back by capturing a reasonably hot pawn on b2. This gave Danny a half-open b-file for his rook but even when he went a pawn ahead again and landed his rook on b7 it looked like the best he could hope for was a draw. That however, was when providence decided to do Dan a favour for, rather than exchanging a pair of rooks on b7, Gordon decided to try and keep the rooks on and vacated the seventh rank. In the process he overlooked that Dan’s queen on f3 would be able to capture the f7 pawn with check and then give mate on h7! The game was up.

Ok, so one freak result is unusual but what happened next was simply extraordinary. Karl Dickinson is another of the Hebden ‘D’ team who’s been unable to win in his first season in the league. He’s learning the ropes and trying to improve. He was up against Malcolm Corbett on board 2 and must have felt a little stumped almost immediately when Malcolm deployed his Alekhine’s Defence an opening I’d imagine Karl has never faced before. Of course, the game became obscure quite quickly and Malcolm won a pawn as early as move 12. By move 18 he’d won a second pawn and seemed to be on his way to a comfortable win but, in the confusion of the early skirmish, Karl had also managed to induce a few weaknesses in the position and the time Malcolm had taken to grab those pawns had allowed Karl to catch up his development deficit. Suddenly the position was very messy and a little unclear.

On move 21 Malcolm developed his bishop aggressively on b4 and appeared to be about to launch a mating attack on Karl’s king which had gone to the queen’s side. However, in developing the bishop he’d allowed Karl to capture a pawn on g7 with his rook and had left his own king in the centre. When Malcolm then deployed what appeared to be the coupe de grace with 22…Qxb3 it turned out there was a twist. Black threatened mate and the queen couldn’t be captured but now Karl had his own queen check on h5. Then there was a bishop check on b6. Malcolm blocked the check with his rook but once the rook was taken the pin on White’s c-pawn had been lifted and Karl simply took Malcolm’s queen! A queen and a rook down was too much and Malcolm threw in the towel immediately.

Whilst all this had been going on order was being restored on boards 3 and 5 where Mike Barnett and Les Johnson beat Paul Dearden and Martha Leggett to keep the match in the balance. It looked like the champions elect might survive a massive scare but in the end even that was beyond them. Perhaps the most surprising win of all was bagged by young Dylan Leggett on board 4. His game against Angel Gonzalez was something of a see-saw affair. In the opening phase of the game Angel neglected his development in order to damage Dylan’s pawn structure. But Dylan, with an untouchable queen on a central square was able to exert the greater pressure and Angel was forced to take a huge risk to complete his development. Dylan won a piece in the tactics that ensued and his opponent’s position appeared to be completely immobilised.

The game took another turn after Angel managed to get the queens off the board and flee with his king to h6. Dylan then either blundered, or simply gave back his extra knight but now maintained a three pawn advantage in a much simplified position. As the endgame bowled on a complex double rook and pawn position arose and Dylan held on to his advantage. Angel seemed to have his ambitions confined to trying to salvage a draw. But then, just as Angel reduced the material deficit to a single pawn, Dylan found a series of checks that forced the Black king on the run once more. Finally, on move 40, possibly in time trouble, Angel blocked another rook check with a rook of his own but overlooked that Dylan could give a further check by advancing the c-pawn. The king had to move and Angel was going to lose his rook. So he resigned and Hebden Bridge ‘D’ had secured the most remarkable result of the season.

If there is a theme running through all three of the games that Belgrave lost it is that one should never underestimate the value of occupying the seventh rank, whether in attack or defence. This tactic was the downfall of each of the Belgrave men.

As a final word on this match it is perhaps worth mentioning that this exact same Belgrave line up draw with a Hebden Bridge ‘A’ team consisting of Webb, Parsons, Leonard, Shapland and Sykes just last season!

Since this match took place two further rounds of league 2 have taken place and business as usual has been restored as Belgrave bounced back with wins against Halifax ‘C’ and Todmorden ‘C’. Last Monday meanwhile Hebden ‘D’ were pummelled 4 — ½ by Halifax ‘C’.

Our other division 2 side have been having a torrid time since Christmas. They themselves only just managed to beat their ‘D’ team colleagues 3 — 2 and that has been their only positive result since the halfway mark.

Belgrave remain top of the division on17 points. Halifax ‘B’ are two points behind them but they do have a match in hand. These two play each other on March the 31st and that match will decide who the champions of league 2 will be. Further down the table Hebden ‘C’ are now only in fifth with 8 points and the ‘D’ team are bottom with 2 points — though they are will long remember the night those points were won! Four of the games from the Hebden ‘D’ vs. Belgrave match can be found in the game viewer below.