Round 10 of a postponement blighted Calderdale Evening Chess League Division 2 took place in venues across the valley during the course of the last two Monday evenings. 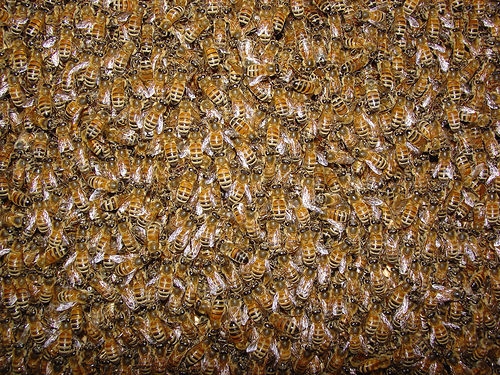 Martin Syrett’s ‘B’s have been all over Calderdale League 2 this season. This image is used under Creative Commons licencing and sourced from kokogiak’s Flickr photostream

This season the title race has been dominated by Hebden Bridge ‘B’. They maintained their 5 point lead at the top of the table by beating Halifax ‘B’ 3 — 2 at the Trades Club this time out. Earlier in the season Martin Syrett’s men had crushed the same team 0 — 5 away and, wanting to avoid such a humiliating score line on this occasion, Halifax brought a stronger line up and gave Hebden a real test.

On board 1, Hebden’s Dave Shapland had been ruthless on the handful of occasions when he’d been deployed, as a personal score of 4/4 illustrates. On this occasion however he was unable to capitalise on Scott Gornall’s unorthodox handling of the Scandinavian Defence. Later on in the game it was Scott who had the better chances of winning but a combination of time-shortage and complexity led him to offer a draw and Dave was happy to accept.

Andy Leatherbarrow has been nothing short of scintillating on boards 1 and 2 this season and he once again added a full point to his personal tally for the season with a confident victory over Carlos Velosa. When faced with anything faintly timorous in the opening Andy’s instinct is to take space and slowly establish a total bind on the position. Sometimes this slow build up can lead to sterility but on other occasions he finds a tactical blow to crown his spatial dominance and this was one of those latter occasions. When the attack broke through Carlos’ defences it was soon over.

Board 3 saw Hebden’s Josh Blinkhorn take on Adrian Dawson. The encounter became fairly wild after Adrian deployed his favourite Lowenthal Variation of the Sicilian Defence. This led to some imbalanced play but ultimately the game fizzled out into a draw where Josh had two bishops and pawns against Adrian’s single rook and pawns. It looked like it should favour Josh but once more the clock situation persuaded him that discretion was the better part of valour.

Dave Sugden had been in dominating form as well this year. He advanced his personal tally to 8½ out of 10 for the season, half a point behind Andy and half a point ahead of Martin Syrett. On this occasion he was put on the back foot early in the game when his opponent responded aggressively to his Vienna Opening system. However, White’s position was totally sound and once Dave had fended off the initial attack Black’s momentum soon halted and he took the initiative and then converted his advantage comfortably.

Hebden’s Captain, Martin Syrett was facing a tricky opponent in the form of John Aldridge. On his day John can be an obdurate and resourceful opponent. Martin sacrificed a pawn in the opening but never really managed to get full compensation and John played well to take the win.

On the same night at the same venue John Kerrane’s Hebden Bridge ‘C’ team were taking on Todmorden ‘C’ who, along with Halifax ‘B’ and Courier ‘B’ were their main rivals for the second promotion spot. Todmorden turned up with a strong side and consequently Hebden struggled below board 1 where John Kerrane continued his own impressive form with a win against Chris Edwards. On boards 2 and 3 the usually reliable Steve Priest and Neil Bamford both had bad nights and lost meaning that only the ever persistant Ray Deravairere (on board 4) was able to salvage a draw from the ruins of a poorly played opening against Tom Webster.

This game ended in a bizarre fashion when Tom ran out of time but Ray either didn’t notice or didn’t claim the win before he too ran out of time. At this point neither player had been recording moves either and so the team captains were called in to confirm that the players’ proposal of a draw was okay with them as well and everything ended amicably.

On the bottom board Hebden’s James Todd was also beaten by Bob Pratt and so the final score did not make happy reading for John’s team:

Then, this Monday, Hebden Bridge ‘D’ travelled to Halifax ‘C’ to play a match they had postponed from the week before due to a high propotion of their players being unavailable during half-term week. Sadly, Danny Crampton was hit with some last minute drop outs for the re-scheduled fixture as well and, although the three remaining team members fought like lions they went down 3 — 2. However, searching for the silver lining it should be noted that both Harry Pogue and Chris Greaves scored their first full points of the season. Well done to them.

There are a variety of games from these league 2 fixtures in the game viewer below.

2 Responses to “Dominating ‘B’s March On”