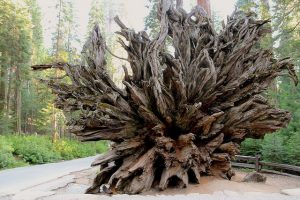 Hebden Bridge ‘A’, like this giant redwood, have been brought down low recently. Can they climb back up the league before it’s too late. Image: Andreas Vonderheit’s Flickr photostream

We must start this post by apologising to readers for the recent service disruption. The web site was hacked and this led to an array of rogue posts being displayed and also a hoard of nonsense comments and ping backs. Gladly, these issues have now been rectified and we hope that normal service can now resume. The only fly in the ointment at the moment is that your Editor’s broadband is currently faulty and this is making it a little less convenient to post content. Hopefully that too will be fixed early next week.

We’ll start our catch up with a post we were planning to publish several weeks ago covering the fifth round of Calderdale League 1.

This week commencing the 19th of November saw the fifth round of Division 1 fixtures played in the Calderdale Evening Chess League. It’s been a fascinating season thus far with the headline story being that the team who have been League champions for the last four seasons are sitting at the bottom of the table.

Admittedly much has changed for the team who were called Todmorden ‘A’ for their title wins in 2014-15, 2015-16, 2016-17 and then became Golden Lion when they won their fourth title last season. Now they have merged with Hebden Bridge chess club and prestige demanded that they adopt the Hebden Bridge ‘A’ moniker. They still have the spine of the team that has swept all before them for the last four years but, somehow, it’s all gone wrong for them so far this season and they have just one draw from their first three matches with a postponed match against Huddersfield ‘A’ to come.

Huddersfield ‘A’ are another of the perennial ‘big beasts’ of the league but they too are in struggling having also managed only a single win from their first three matches.

In this week’s round of fixtures Hebden ‘A’ visited Belgrave ‘A’ who have been performing very well so far and lie in second place in the table. Huddersfield ‘A’ hosted Hebden Bridge ‘C’ who were alongside them on two points. League leaders Hebden Bridge ‘B’ were also at the Belgrave Club as they played Belgrave ‘B’ and Halifax ‘A’ played Huddersfield ‘B’ at home.

Let’s start our round up with news of those teams languishing at the foot of the table for a change. Hebden ‘A’ took their strongest line up of the season so far to Belgrave. Messrs Clarkson, Hamer and Cook were joined by Mick Connor in his first appearance of the season and Andy Swales. Belgrave ‘A’s line-up looked very solid indeed with John Morgan, Dave Patrick, Peter Hughes, Malcolm Corbett and Karim Khan taking to the field. On paper it looked like it would be a tight battle and so it proved to be.

The encounters on the top three boards were all very competitive. It was on the bottom two boards where the fixture was decided. Mick Connor went down to Malcolm Corbett on board four. Your Editor didn’t see much of this one but Mick seemed to have had some kind of opening catastrophe on the White side of a Dutch Defence because Malcolm’s position looked very good early in the middle game.

Matters got even worse for the visitors when Andy Swales lost on time to Karim Khan whilst thinking about his 22nd move. Apparently, he had misunderstood the time controls but, nevertheless, seemed to be playing at a much slower rate than Karim in the early stages of the game.

Hebden struck back when Phil Cook defeated Peter Hughes on board three and now the match came down to whether or not Andrew or Martyn could manage to defeat John or Dave respectively. Both the Belgrave men were lower rated but of course they are also very experienced and hard to breakdown. Andrew and John’s game seemed to seesaw back and forth. There was no lack of excitement here but, after many adventures a draw was agreed.

Martyn and Dave were the last to finish with Martyn pressing for a win in an endgame where he was a pawn up. However, Dave defended resourcefully and kept his opponent at bay – just. So, Belgrave won the match by the narrowest possible margin and consigned Hebden Bridge ‘A’ to their third defeat in four matches. Here is the match score card:

Huddersfield ‘A’s match with Hebden Bridge ‘C’ took place on Wednesday evening at the Lindley Club and immediately the home side were given a boost when the visitors arrived with only four players. It seems to be becoming increasingly difficult for the teams who play most of their matches on Monday nights to field anything like their usual line ups on a Wednesday night on the one occasion in the season when they need to do so. Earlier this season Halifax ‘A’ visited Huddersfield with a side that looked nothing like any of the other sides they’ve put out in the rest of the fixtures.

Now Hebden Bridge ‘B’s line up was also much altered. They had three regulars in the form of Andy Leatherbarrow, Martin Syrett and Neil Bamford. Paul Gledhill would normally have joined them but he was unavailable on the Wednesday night and so switched into the Hebden Bridge ‘B’ team playing at Belgrave ‘B’. Going in the other direction was Sam Swain who was unavailable on the Monday night but was able to play to supplement the ‘C’ team’s ranks on Wednesday.

Sam’s reward was a tough board 1 match against Greg Eagleton which the ratings suggested he would find challenging and indeed he did. However, Sam’s inclusion enabled Andy, Martin and Neil to play one board lower and they made this set of circumstance count. Andy defeated Steve Westmoreland on board 2, Martin drew with John Lavan on board three and Neil beat Nicola Thompson on board 4 to counteract the default on board 5. This tied match result was excellent for Hebden ‘C’ but more bad news for Huddersfield.

Huddersfield ‘A’s visit to Hebden Bridge ‘A’ at the Golden Lion on Monday 26th now assumes a great deal of importance. If Hebden can manage their first win of the season they will draw alongside their visitors and Hebden Bridge ‘C’ on three points and can hope to dig themselves out of their current trough of despair. Lose however and they’ll be cut adrift at the foot of the table and in grave danger of relegation which would have been unthinkable at the start of the season.

Back at the Belgrave Club on Hebden Bridge ‘B’ were busy continuing their perfect start to the season as they put Belgrave ‘B’ to the sword. However, it wasn’t as convincing as they scoreline may suggest. Pete Leonard defeated Keith Marsh relatively comfortably on board 3 and Richard Bedford did the same for the visitors against Angel Gonzalez on board 4, but on the other three boards it was much harder going for the league leaders.

On board 5, Paul Gledhill’s debut for the ‘B’ team was not a happy one as he went down against Belgrave’s form man of the season so far, Steve Harrington. He is 3/4 in League 1 and 4/4 in Division 2.

Matthew Parsons also had a real struggle on his hands against Gordon Farrar on board 1 although he finally came through with some excellent calculation in an end game to get the win that took Hebden over the line to three points.

Finally, the board 2 encounter between the team captains, Mike Barnett of Belgrave and Dave Shapland of Hebden Bridge, was a marathon. Dave got a good position out of the opening against Mike’s Pirc Defence. However, he then frittered that advantage away with some loose moves and then made the mistake of continuing to play for a win in what was objectively a drawn position. Dave’s obduracy should have been punished as Mike gained a winning position in a king and pawn ending but, at the end of a long night he somehow couldn’t seem to find the right winning method and ended up settling for a draw. A very lucky escape for Dave!

In the final match to be played on the 19th of November, Halifax ‘A’ hosted Huddersfield ‘B’ (this was supposed to be the other way round so we assume there must have been a venue problem for Huddersfield ‘B’. On the night Leo Keely beat Winston Williams on board 1, but this was offset by Bill Somerset and Richard Porter who beat Simon Anscombe and Granville Boot respectively to give the home side a 3 – 2 win. Boards 4 and 5 were drawn.

In our next post we’ll update readers on the postponed match played between Hebden Bridge ‘A and Huddersfield ‘A’ and also catch up with round 2 of the Calderdale Individual Championship which was played on December 3rd.

There are a whole host of games from this round of fixtures in the game viewer below.