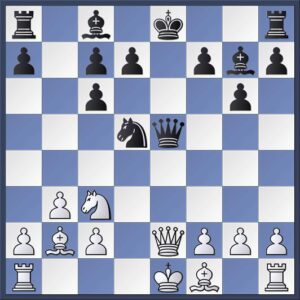 Rupf vs. Blinkhorn, 4NCL Online, 2021. White to play. Black has just captured a pawn on e5 with his queen. It looks like a clean pawn win but he’d over looked a beautiful tactic which, thankfully his opponent (and everyone who studied the game afterwards!) also missed. Can you do better? The solution is in the article below.

It’s been a very long time since this website made a post – the last one was on the 5th of April, 2020! That report acknowledged of course that our ‘normal’ activities have had to be curtailed due to COVID-19. Now, nearly ten months on, we still can’t meet physically at the Trades Club and we can’t play any matches in the Calderdale Evening League or any other ‘over the board’ encounters for that matter. It is of course impossible to know when these activities will be able to resume – perhaps we can hope for a usual scheduled start to the 2021-22 season in September – but one thing is for sure, when they do resume, they won’t be or feel quite the same.

During the lockdown we have, of course, moved online. Lichess has become our website of choice for meeting to play games against each other and we have established our own Hebden Bridge Chess Club pages where members can come and meet each other for friendly games. We’re doing that most Mondays. We’ve also been holding Study Night sessions on Microsoft Teams on Thursday nights which has been a good opportunity to actually see each other and, hopefully, learn something and be entertained! Meanwhile, updates to members have been delivered via email rather than here on the website. If anyone isn’t getting these and would like to please email me at hebdenbridgechessclub@gmail.com to get added to the mailing list.

The whole chess world has migrated to being online although there have been, and still are, a very few elite level over the board tournaments being played – Wijk Aan Zee is taking place at the moment. In England our salvation has been the 4NCL (Four Nations Chess League) which has successfully adapted to move from being a fairly exclusive, over the board club competition to welcoming chess club teams from across the nation at all levels of ability in its new online incarnation. They’ve also moved their individual congresses online and so their are chances to play chess at a decent time limit (45mins + 15secs per move) both in the team and individual formats.

Season 3 (each season lasts 4 months) of the 4NCL Online League began on Tuesday night and we’re delighted to report that Hebden Bridge debuted two teams of four and have a squad of 14 registered players. Both sides start out in Division 7. This is one giant league of 66 teams and it’s a 7-round swiss system. If our teams manage to fight their way out of this division (it’s still not quite clear to me how that works) then the top six leagues each consist of four groups of eight teams. They each play each other and then the top team from each group contest semi-finals and a final. Of course Division 1 contains some extremely strong players amongst their number – even some Grand Masters.

Back to Division 7. Our 1st team are seeded three in the division and our 2nd team are seeded 16th. This meant both sides were in the top half of the draw and got paired with fairly low-ranked opposition. Hebden Bridge 1 lined up against Wessex Some Stars G with Phil Cook, Greg Eagleton, Andrew Clarkson and Dave Shapland in their team. Hebden Bridge 2 were up against Barnet Knights D and fielded David Wedge, Pete Leonard, Josh Blinkhorn and Rob Catlow.

It was interesting to be paired against what seemed generally to be fairly fresh group of players, many of whom I’d guess were juniors. This led to some stereotypical examples of what can happen when two players of very different playing strengths are pitted against each other. Prime among these was the first game of the night to finish on board 4 of Hebden Bridge 2’s match with Barnet Knights D. Rob Catlow’s opponent played so quickly that she actually ended the game with more time on her clock than when she started (remember that after every move is made 15 seconds are automatically added to your clock) so, while Rob was taking his time to make sure he saw as much as he could his opponent was blitzing out moves and was almost inevitably bound to miss something eventually. Indeed, after some mistakes on both sides of the board Leela Maya overlooked Robs’ 26.Ng6+ after which the roof caved in on her position.

At the other end of the spectrum, the other fourth board encounter between Hebden Bridge 1 and Wessex Some Stars G saw Dave Shapland’s opponent, George White playing at glacial speed early on in their game. Dave chose to play the French Defence (not his usual selection!) having seen that his opponent played the Tarrasch Variation (3.Ne2) which is his own choice against that opening with White. The plan turned out well when his opponent first played sub-optimal early moves but also took ever such a long time to make them. Already a pawn down after eight moves, George was ten minutes behind on the clock by move ten and had just eight minutes plus the increment to complete them game by the time he’d reached move twenty. Aside from one brief slip where his opponent could have equlaised, Dave steadily built up a space advantage and then pushed through his central pawn majority in thematic style until White’s position broke down under the pressure.

By the time this game was over, both matches were settled in Hebden’s favour. After Rob’s early win the 2nd team collected two more wins for Josh Blinkhorn (re-joining the club from his new home in Germany!) and Pete Leonard. Josh survived a scare when his opponent missed a particularly devious and beautiful tactic. In the position given above if Oscar Rupf had found 11.Ne4!! he would have pretty much won the game on the spot as 11…Qxb2?? allows 12.Nd6+ followed by either 13.Qe8 or Nxf7 checkmate! So, Black is therefore forced to give up his queen. Having survived that moment, shortly after, Josh showed that his own tactical awareness was sharper when he saw further in a forcing line and bagged a piece. He coasted home after that.

As the club’s most assiduous pawn grabber, Pete must have been delighted when his opponent played the Icelandic Gambit variation of the Scandinavian Defence and simply collected the proffered pawn. He held on to it comfortably and then took full advantage when his opponent overlooked an intermezzo (17.Ne4) which won him a piece. The rest was easy.

The remaining games lasted somewhat longer and were hard fought although Greg Eagleton, on board 2 for the 1st team, picked up his opponent’s queen when she blundered it on move 17. She went berserk after that trying to go for Greg’s king but he stayed calm, defused the tactics and then delivered checkmate with his huge material advantage. On board 1, Phil Cook played a typically smooth game on the White side of a Catalan. He simply retained a small positional advantage and put his opponent under pressure until he too made a tactical error that cost him a piece. Now the 1st team had also secured a 3-0 lead.

Andrew Clarkson made it 4-0 when was finally able to convert his long term positional trumps out of a Maroczy Bind set up in the opening. He managed to get all his pawns on the right coloured squares in preparation for a same coloured bishops ending and then, when his opponent finally gave him a tactical opportunity he didn’t miss it, grabbed an extra pawn and then converted the technical ending without any problems.

Last to finish was David Wedge on board 1 for the 2nd team. He too had to be patient against a resilient opponent who resisted well but slowly slipped into an inferior position. Dave broke through on the queen’s side, set himself up with a passed c-pawn and drove it home remorselessly.

So, a fine start for both teams in the 4NCL. I won’t bother sharing the score cards as the score lines for each player are easily remembered! Tough match ups will most certainly lie ahead in round 2. But for now all the games are posted in the game viewer below. Andrew Clarkson has kindly provided some light annotations for his game. The rest of the annotations are from the Lichess house engine analysis.

For the benefit of those who are uninitiated (or simply can’t remember as it’s been so long!) the game viewer below contains all eight games played on Tuesday night. It will automatically scroll through all of them one after the other unless you tell it to stop by clicking on the ‘=’ button below the board. To select the game you wish to view click on the ‘…’ symbol in the white box above the board. This will reveal a drop down menu for you to choose from and when you select your game will appear. You can navigate forwards and backwards using the arrow buttons beneath the board or click on the moves in the text box on the right. Most of the annotations in these games have been generated by Lichess’ in house engine which creates auto-analysis for every game played (one of the tools they use to track down and punish cheats!) and are therefore part of the download when you export games from Lichess to your own chess engine or database.

One Response to “First signs of a ‘new normal’?”