Have you ever wanted to pit your wits against a Grand Master? Well now’s your chance!

Hebden Bridge Chess Club is delighted to announce that Grand Master Daniel Gormally (ranked as England’s number 14 by FIDE) has accepted our invitation to take on 30 opponents simultaneously to help us raise funds for Calderdale Flood Relief.

When: Sunday 7th of February (player registration at 1.30pm with games starting at 2.00pm)
Where: Hebden Bridge Town Hall
Entry Fee: £20 (entry fees will be collected on the day)
Register: There is an online form below or you can email us at hebdenbridgechessclub@gmail.com
Space is limited so boards will be allocated on a first come, first served basis.

If you can’t play on the day don’t worry, you can still contribute to this worthwhile local cause. We’ll also be running a raffle and have a number of high-value chess related prizes that have been donated by generous sponsors including 3 annual premium memberships to Chess24. 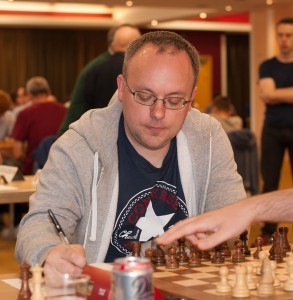 Achievements:
Danny has represented England at the Turin Chess Olympiad in 2006 and at European Team Championships
Last year he finished equal second in the British Chess Championship scoring  8/11. This unbeaten performance included a win against the eventual champion Jonathan Hawkins and a draw with the defending champion David Howell.

GM Gormally has authored a number of acclaimed books and videos including:

He’s also written many magazine articles and is a respected chess coach.

Style:
Danny is renowned for his attacking style of play personal. His favourite openings are the Najdorf and the Grunfeld.

3 Responses to “Your chance to play a Grand Master”