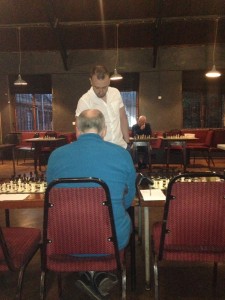 Matthew Webb (standing) took on 10 players at once (including Andy Leatherbarrow – seated) at the Trades Club on Monday night.

Matty enjoyed a truly golden season last year sweeping all before him in the local leagues, Yorkshire League, 4NCL and congresses. As a result he gained a huge number of rating points and is currently the 5th highest rated player in Yorkshire according to the YCA rating website. This match was also preparation for Matty as he is due to fly out to Bilbao on Sunday to take part in the European Club Championship for Yorkshire’s ‘White Rose’ outfit.

With such a huge rating difference on paper between Matty and the rest of the participants, one might have expected a clean sweep of wins for him. However, he had generously accepted a number of conditions that would place significant restrictions on his ability to bring his very best game to every one of the ten boards.

Of course playing ten games at once requires excellent powers of concentration as well as the ability to spot tactical hazards and opportunities very quickly. A number of the games were effectively decided by tactical shots, some of which were harder to spot than others.

The night began very well for Mr Webb as he was donated an early victory by your correspondent. I believe I’ve only blundered into a knight fork of my king and queen once before in a game played at a classical time limit. Now it’s twice! I was hugely overoptimistic with my opening play. White advancing the g-pawn in the early stages of Philidor’s Defence is not particularly unusual but my follow up play was recklessly aggressive and I subsequently ‘forgot’ that my g-pawn was no longer protecting f3 as Matty simply played Nf3 to fork my king on e1 and my queen on e4. Game over in embarrassing fashion!

It wasn’t too long after this that Dylan Leggett was checkmated having started to haemorrhage material straight after the opening. Terry Sullivan was next to succumb after he’d been able to essay an opening variation that I would readily have given my right arm to have contested with Matty — a Closed French Tarrasch. Terry got a reasonable position from the opening without causing Matty any real problems but then he overlooked a line of tactics that first lost him a piece and then ultimately a rook. Matty made short work of him after that.

The rest of the games looked like they’d last rather longer. In particular, the highest rated player participating after Matty, Matthew Parsons, was holding his own and Martin Syrett, Pete Leonard and John Kerrane all seemed to be fairing well. Pete’s game looked particular stressful for his opponent as neither king was castled, the centre was open and there were pieces and tactics everywhere.

“I hope you know what’s going on here,” said Matty to Pete at one point “because I don’t!” 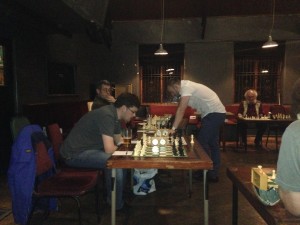 Matthew Parsons (front left) and Martin Syrett (back left) both managed to take draws off Matty. Martin could even have won his game at the end of the evening.

Andy Leatherbarrow became another mark on Matty’s tally-stick as his position caved in mid-way through the evening’s play. Sitting next to Terry, Andy had played the French Defence against Matty with colours reversed and he got another Tarrasch Variation. He chose a slightly offbeat but reputable line and seemed to be managing ok in the opening stages before he too overlooked a tactic that lost him a pawn and then seemed to play a couple of moves that lacked real purpose. Matty took the c-file, infiltrated his queen and Andy’s game simply fell apart.

Then came the great surprise of the evening as one of the lowest rated players in the room outwitted our guest in most unorthodox style. Danny Crampton lulled Matty into a false sense of security by blundering a piece as early as move 6. However, he then hung on tenaciously and sneakily made his moves almost as soon as Matty left his board. Matty didn’t notice that he was being blitzed and was crest-fallen when Danny pointed out that he’d lost on time in a winning position! Kudos to Danny for successfully deploying such a crafty approach as he might well have been completely crushed before he managed to run down Matty’s clock.

After this mishap Matty started to pay much more attention to his clock situation on all boards and no-one else was given the opportunity to do what Danny had done. The next game to finish was his contest with Mathew Parsons. Matty found a way to grab a pawn but soon was compelled to give it back and as the pieces came off he offered Matthew a draw. It seemed that White had no winning chances to speak of and so he accepted the offer without too much hesitation or regret. A post-mortem with some of the spectators left everyone in no-doubt that a draw was the right outcome.

Ian Gowers was participating as a guest from Halifax Chess club and he opted for a rock solid approach with the White pieces. Although this assured him a reasonably long game it didn’t afford him any real chances to take the advantage and Matty slowly ground him down until he was two many pawns up in a king and pawn ending.

Now there were just three more game in play and at this point Matty’s karma equalised itself as John Kerrane realised too late that his opponent’s clock had not been running for a significant portion of the evening. It probably wouldn’t have made any difference for here too Matty had slowly increased his advantage until finally he had two extra pawns in a rook and bishop endgame. It was already resignable before John over looked an intermezzo that forced his king to abandon its protection of his attacked bishop.

By this stage Pete Leonard had also lost his game. The game was held in a dramatic tension for quite some time but in the end Matty’s initiative proved to be a little bit faster than Pete’s as he showed admirable powers of calculation to judge his mating attack to perfection just as it appeared Pete might have him on the ropes.

All of this left Martin Syrett, that most resourceful and obdurate of opponents. He scored some very good results last season including managing to hold Huddersfield’s top board Greg Eagleton to a draw and being the only player who managed to draw with Matthew Parsons in the Calderdale Individual Championship. 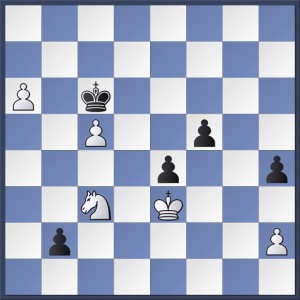 Syrett vs. Webb. It’s White’s 58th move. How could Martin have stopped the advancing Black pawns to claim a famous victory? Answer in the game viewer below

Martin curbed his wilder side and played the opening carefully and sensibly. He obtained a position that didn’t appear to offer him any real prospects of gaining an advantage but which also looked extremely resilient. Matty sought positional advantages and when Martin’s light squared bishop became entombed behind a network of his own pawns it appeared that the mission had been accomplished. However, after the queens were exchanged, Matty then decided on a highly ambitious and possibly dubious sacrifice of a piece for three pawns.

The game boiled down to Martins knight and three pawns against Matty’s six pawns. It felt like the knight was better but Matty had set up dangerous threats that seemed to have Martins’ knight and king tied to the defence (see right). The whispering kibitzers all had their own opinions but eventually Matty realised that he’d pushed as hard as he could and was possibly going to lose and so he offered a draw which Martin, unable to find the solution that would allow him to win the game, gratefully accepted.

Here then are the final results from the ten board simultaneous match:

With a final score of won 7, drew 2, lost 1 this represents a really splendid result for Matty in his first ever simultaneous, especially when you consider the nature of his defeat. Congratulations to Danny, Martin and Matthew for their results too. I’ve added all of the games (with light notes to the position above in Syrett vs. Webb) in the viewer below.

Here’s hoping we can entice Matty back for another one of these next year. We wish him the very best for Bilbao.

Next week the club will be holding our annual individual lightning competition were players are given just 10 seconds each to make their moves. This format always produces some unexpected results and exciting play.