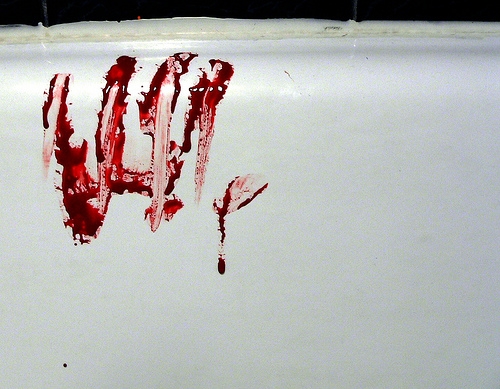 The mark of violent conflict! In the last two seasons Brighouse and Hebden Bridge ‘A’ have settled no fewer than 10 decisive games in the two ties as Brighouse. This image is used under Creative Commons licence and is sourced from Inkysloth’s Flickr photostream

This week we turn our gaze once more to Calderdale League 1 as we report on two crucial rounds of action which took place on the 4th of March and the 25th of March. Last time we reported on League 1 defending champions, Hebden Bridge ‘A’ had found themselves top of the table largely down to the frailty of their title rivals rather than any scintillating form of their own. They were grafting out tight results. That trend has not changed in the last two weeks.

15 months ago I posted an article entitled “Hebden Survive Brighouse Bloodbath” in which I documented how all five games between Brighouse and Hebden Bridge ‘A’ ended decisively and Hebden managed to win the last two games to finish that evening to squeak a 2-3 victory. Well, this last Monday night history pretty much repeated itself albeit with a slightly different sequence of events.

The night started out promisingly for Hebden in that Brighouse’s board 4, Paul Whitehouse, didn’t appear and so Andy Leatherbarrow picked up a full point for Hebden without picking up a piece. A shame for him not to have had a game and a shame for Brighouse as if Paul had turned up any kind of result from him would have given Brighouse some much needed points towards their relegation battle.

Mid-way through the evening the outcome of the tie seemed to have been decided when Hebden’s Captain, Dave Shapland, won a typically rumbustious encounter with Brighouse’s Captain, Bruce Bendall. Out of a Grand Prix Attack variation of the Sicilian Defence Dave equalised quickly and then struck out in the centre in thematic fashion to put Bruce on the back foot. Resourcefully, Bruce found an interesting and dangerous way to sharpen the position and Dave, never one to turn down an interesting and complicated line, picked up the gauntlet by treading a narrow line between delivering check mate or getting checkmated. In the end he got his calculations right and Bruce was forced to resign. The game is given in full with some notes in the viewer at the end of this post. This was an exciting encounter to which both players contributed fully.

That game put Hebden 0-2 up and as Dave Shapland looked at the remaining three boards he had good cause to think his side might even complete a whitewash as Matthew Parsons, Pete Leonard and Nick Sykes had all achieved advantages in their games. But then it all started to go wrong…

Matthew Parsons is one of the most indomitable players in the league. He very rarely loses and blunders material even less frequently. Therefore it was surely a freak event when he overlooked the presence of Dennis Breen’s dark squared bishop on a7 and gave away his queen! Last year Dennis confused Dave Shapland into overlooking a mate in 1 and so Dave was given cause to remark to Bruce that he had some kind of hoodoo over the Hebden team to which Bruce amusingly replied words to the effect that:

“It’s the way Dennis plays, lots, of traps and tricks. It’s not magic. He just looks like a wizard!”

On board 2 Hebden’s Pete Leonard had grabbed a couple of Robert Broadbent’s pawns early in the game and Robert didn’t appear to have enough compensation for the material deficit. Seemingly in desperation, Robert offered Pete a third pawn and he gobbled that up too but this time Robert did get something in exchange. His queen got into Pete’s position and ran amok. The Black position was still defensible but it was challenging and Pete went wrong somewhere allowing Robert to initiate a king hunt that ended in check mate. 2-2!

Poor Nick Sykes carries a heavy burden for Hebden Bridge. Playing on board 5 for a side that is competing for the title requires that you score very heavily indeed, often against players rated below you. Nick has performed this role admirably for the last 18 months but that doesn’t mean he doesn’t feel the pressure when, as so often is the case, he is the last player to finish his game and needs to get a result to help his side succeed. On this occasion he deployed the Caro-Kann (!) against Ronnie Grandage and he achieved the kind of position where he could not lose and could probe and manoeuvre almost endlessly in order to try and provoke weaknesses in the enemy camp. It took a while but gradually he wore Ronnie down and eventually he put one of his rooks on the wrong square and allowed Nick a combination that won the exchange. Ronnie resigned shortly afterwards and Nick (and Hebden) had escaped again from Brighouse with the narrowest possible margin of victory and five decisive results.

This result leaves Hebden top of the table with three rounds left to play including their re-scheduled match away to title rivals Halifax ‘A’.

On the previous Monday the busy ‘A’ team had taken on Todmorden ‘A’ at home in another match that looked like it should have been very testing on paper but turned out to be straightforward due to their opponents failing to field a full team. On this occasion Pete Mulleady did not appear to play against Hebden’s Pete Leonard on board 2 and that result cost the visitors dearly.

The board 1 encounter was another tepid affair between Matthew Parsons and Martin Hamer. They have played a series of fairly sterile short draws in previous encounters and this one proved to be no different. Obviously these two respect each other greatly but in this instance, with their board 2 man missing, early peace terms did not do a great deal to advance Todmorden’s cause as they now needed to score two and a half points from the bottom three boards to take the match!

They came closest on board 3 where Andrew Clarkson and Dave Shapland slugged out another frantic encounter. Their fourth full-blooded scrap since last summer: two in the league and two in the Summer Team Knockout. That all four have ended in draws was I no way down to any lack of trying by either player. All have been complicated affairs and in every case at least one player has overlooked good winning chances. This time around Andrew missed the best opportunities but Dave salvaged a draw through a combination of resourceful moves and judicious use of Andrew’s time shortage as move 36 loomed into view. The game with commentary by both players is featured in the viewer at the end of this post.

On board 4 Andy Leatherbarrow developed a very pleasant position against Rob Tokeley’s Caro-Kann, Bronstein Variation (3…Nf6 4.Nxf6 exf6). There was never even the remotest chance that Andy might lose the game but likewise he didn’t seem to find any plans that put Rob under the greatest pressure and a draw therefore always seemed likely.

That left Nick Sykes to add the icing to the cake by adding a second full point to the three halved ones for Hebden. Nick ventured his trusty English Opening and Chris met this with a reversed Sicilian set up. Black appeared to be gaining some initiative but Nick had it all under control and when Chris overlooked a tactic that lost him a piece Nick simply had to thwart any chances of counter play and swap the pieces off. He did this with great assurance and converted confidently.

So far Hebden have a perfect score for the second half of the season and their run has seen them overturn the 3 point advantage that Huddersfield held over them at Christmas. True, they have been beneficiaries of three defaulted boards in that time but you can only beat what’s put in front of you and Hebden have done just that. The rescheduled Halifax ‘A’ match is next up and if they win that they will be 3 points clear themselves with only two matches left. Based on their near-disastrous run in last season they can’t afford to be complacent. What they can be is confident that they are in control of their own destiny from here on in. They’ve earned the right to that much. Can they see it through?

2 Responses to “Hebden Survive Another Bloodbath at Brighouse”