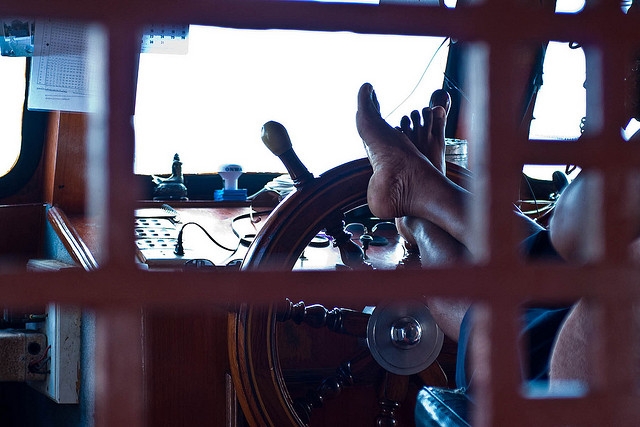 Huddersfield are now in charge of their own destiny in League 1. If they remain unbeaten in their last two fixtures and they will take back the title from Hebden Bridge. They are not quite ready to steer with their feet… but almost. This image is used under Creative Commons terms and sourced from hadsie’s Flickr photostream.

There was a further round of fixtures in both leagues 1 and 2 during the course of the last two weeks. We’ll focus on the league 1 situation first as these matches took place last Monday the 23rd of March.

The headline news is that Huddersfield are now very much in the box seat for the title as they avenged the surprise home defeat they suffered before Christmas at the hands of Brighouse by beating the same team away by 1½ — 3½. Mitchell Burke led the way on board 1 with a victory over Robert Broadbent and the tie was effectively polished off on the bottom two boards where David’s Firth and Tooley dispatched Nick Hudson and Paul Whitehouse respectively. This ensured Huddersfield reached 19 points and would maintain their lead at the top.

Of critical importance was the match up between Courier ‘A’ and Todmorden ‘A’ which took place in Halifax at the Belgrave Social Club. Courier made a clear statement of intent by fielding Phil Watson on board 1 followed by Tony Slinger, John Morgan, Dave Patrick and Robert Clegg. This is their strongest possible line up. They knew they had to defeat Todmorden to stay in touch with the title race and win they did by a margin of 3½ — 1½. Todmorden unfortunately displayed an age-old frailty in that they were not able to field the kind of strength away from home that they put out consistently in Todmorden. Missing Pete Mulleady and Rob Tokeley they only managed to replace these players with weaker players and they paid a heavy price. Chris Edwards lost to Robert Clegg on the bottom board and Martin Hamer lost to Phil Watson on the top board to condemn them to defeat. This result means that Courier stay two points behind Huddersfield but Todmorden have now lost control of their own destiny for they are three points behind and can’t catch Huddersfield if the top team win their next match.

Huddersfield’s win also put paid to any slim hopes the reigning champions had of catching their rivals. Hebden Bridge ‘A’ were therefore playing for pride at home to Halifax ‘A’. Halifax meanwhile, like Courier knew that they needed a win to stay in touch with Huddersfield and they fielded a powerful line up to take on the team that had surprised them at home in the first half of the season.

The night got off to a cautious start as Andy Leatherbarrow and Sam Scurfield chopped wood with wonderous efficiency on board 5 to agree a draw on move 15. After that the wheels fell off completely for the home team. First of all Dave Shapland conceded his first defeat of the season for the ‘A’ team as he played over ambitiously against Winston Williams and then overlooked a tactic that led to checkmate. Next up Nick Sykes came off second best in the battle of the Captains on board 4 as, after securing an early advantage against Carlos Velosa, he lost control. The position got messy and Carlos took his chance to generate a mating attack.

So far so bad! Hebden now needed their top two boards to win in order just to save the match. It wasn’t going to happen. Andy Bak succeeded in getting a draw off Darwin Ursal on board 2, no mean feat given the form Darwin has been in this season (it’s just his second draw of the year in the league!) in a game where Darwin generated absolutely nothing at all from a Sicilian Kalashnikov variation but Andrew didn’t have enough of an edge to convert the endgame.

Finally Matthew Parsons also succumbed to Bill Somerset on board 1 as he ventured a sacrifice that netted him an attack and two pawns for a piece. Bill however defended with extreme accuracy, repelled the attack and then engineered simplifications to convert his material advantage.

All these results played right into the league leader’s hands for both of their closest pursuers, Halifax and Courier, have already played them twice and so cannot directly affect the outcome of the title race. These two must hope that either Hebden Bridge (next) or Todmorden ‘A’ (last) can produce a win that will allow them to catch up. If Hebden could pull off a surprise and beat Huddersfield and Todmorden were able to beat Halifax on the road then a grand stand finish would be in prospect with Courier hosting Halifax and Todmorden hosting Huddersfield on the last day of the season. More likely Huddersfield will beat Hebden and give themselves draw odds for the title against Todmorden in the final round. Good luck to them!

At the other end of the table, Brighouse’s defeat still leaves them in a desperate situation as far as relegation is concerned. They are second from bottom only on board count over Hebden Bridge ‘B’ and either side need to win both their remaining matches to have any chances of staying up. The only reason that they still have this slender hope is because Hebden ‘B’ managed to draw with Todmorden ‘B’ last Monday. It was the kind of performance they’ve been threatening all season but they couldn’t manage the extra half point that they desperately needed for a win that would have given them a much greater chance of staying up.

In the end Martin Syrett’s men had to content themselves with some really excellent individual results. Josh Blinkhorn dispatched Neil Suttie with cruel efficiency on board 1 and Martin Syrett also won impressively against Paul Edwards whilst Neil Bamford continued his recent good form by drawing with Rob Collier. The two defeats cost them dear. Dan Crampton was always likely to be up against it on board 5 with Tom Webster opposite him but John Allan got into clock difficulties on board 2 against Mike Huett when it looked like he was doing well. John’s zeintot and Mike’s resourcefulness was enough to turn the game in it’s head and the last game of the night to finish went Todmorden’s way and they held the draw.

To his very great credit at least Dan Crampton managed to improve on this result when he faced Tom Webster again this last Monday night as the League 2 team played another round of fixtures. John Kerrane reports on the action:

Hebden Bridge ‘C’ travelled to Claremount Social Club, Halifax, to take on Courier ‘B’. The teams looked evenly matched on paper, and when Ray Deravairere pounced on an error by his opponent to produce a checkmate in the last game to finish, the expected 2-2 draw emerged.

Hebden Bridge ‘D’, meanwhile, were playing at home at the Trades Club, Holme Street, against a very strong Todmorden ‘C’ side. Captain Dan Crampton finished the evening kicking himself for having missed a forced checkmate early in his game against Tom Webster, but his half-point was the only bright spot for the team, and the result went 4½-½ to the visitors.

Hebden Bridge ‘D’ also played a re-scheduled fixture against Halifax ‘B’ the week before when the League 1 sides were playing. Here’s the score card from that one:

Elsewhere in League 2 the critical match between Belgrave and Halifax ‘B’ took place this last Monday. Halifax were looking to upset the applecart and snatch the title from Belgrave and they signalled their intent by fielding a very strong side indeed. However, in the end it was Belgrave who shaded it 3 — 2 and that means they are pretty much assured of the title. Halifax will probably join them in promotion but they are now only a single point ahead of Todmorden ‘C’ (though they have a game in hand on their pursuers.

In the game viewer below you’ll find a number of games from the league 1 matches mentioned in this report. My thanks as always to those who have sent me commentary for their games.

15 Responses to “Huddersfield take the wheel”