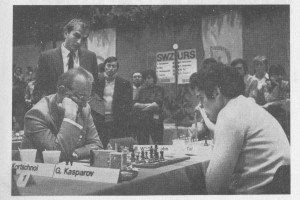 Considering he was/is one of the greatest players of all time Garry Kasparov has featured surprisingly infrequently on this website. It’s time to put the record straight with a post dedicated to the ex-World Champion who is one of my chess heroes.

November the 9th is a date that Kasparov remembers with great fondness as I discovered recently when watching an interview clip with him on You Tube. There are two reasons for this. The first, and most prominent, is that he won the World title from Anatoly Karpov on the 9th of November 1985. Not only that but he won the match with a game that is considered to be a masterpiece. If you haven’t seen it, I’ve put it into the game viewer below. The annotation is Raymond Keene’s.

The second game in the viewer was also played on the 9th of November. This time Kasparov draws his happy memories from his famous victory against Victor Korchnoi at the Lucerne Olympiad in 1982. Kasparov was just a young man then and of course Korchnoi was persona non grata with the Soviets due to his defection and the acrimonious clashes he’d had with Karpov for the World title in 1978 and 1981. When the USSR were due to play Korchnoi’s adopted nation, Switzerland, Karpov immediately said he wouldn’t play in the match and that forced young Kasparov into the limelight to play on board 1 for his country against the defector.

I’ve added the link to the interview with Kasparov where he tells the fascinating story behind this game with Korchnoi – the passage about Lucern 1982 starts at 0:55. It’s really interesting and the game analysis is excellent. If you want to follow the analysis through for the whole game then you’ll need to watch parts 28 and 29 in this series as well. You’ll be directed to the next part at the end of each video.

Below is a later segment of the interview where Kasparov talks about and analyses the famous game with Karpov. This is a long video which is well worth watching in full. However, if you just want the segment about the final game of the 1985 World Championship then you should skip to 40:00.

So there you are. Two good reasons why Garry Kasparov will be smiling today!