Round 10 of the Calderdale Evening Chess League Division 1 took place this week and the key clash was between league leaders Hebden Bridge ‘A’ and the title holders Todmorden ‘A’. While these two duked it out for pole position in the league the third team in close contention for the title, Halifax ‘A’ took a bye week and were able to watch the results come in with interest.

In the first half of the season Hebden had held Todmorden to a draw at home when they all had the Black pieces. Indeed they had very nearly won the match with the champions winning the final game at the end of the night to equalise. Interestingly, on Monday night the sides both fielded identical line ups to the first encounter. Todmorden were at full strength with Messrs Hamer, Mulleady, Cook, Clarkson and Patrick all available. Hebden meanwhile had almost their best line up on paper with only Pete Leonard missing as they fielded Matthew Parsons, Andy and Chris Bak, Dave Shapland and Nick Sykes. Another gripping match was expected with Todmorden three points behind their visitors but with a match in hand.

Sadly for Hebden Bridge their night got off to a pretty bad start and they never really got going or even looked like posing their hosts any problems. This Todmorden line up are a very solid side and they don’t lose many games so it’s important not to drop too many boards against them. That Hebden failed to win on a single board was tough enough, that they lost three of the five was particularly disappointing. 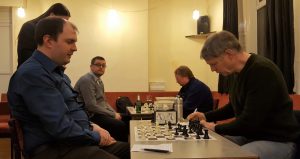 Andy Bak and Pete Mulleady (front) and Matthew Parsons and Martin Hamer (rear) get to grips at the start of the evening’s play. [Photo by Andrew Clarkson]

Proceedings went wrong alarmingly quickly and in surprising fashion when Matthew Parsons made a move order mistake in an opening line he is very familiar with. Ordinarily this might have enabled Martin Hamer to equalise with ease but on this occasion the imprecision cost Matthew and exchange for absolutely no counter play. Martin converted very quickly and smoothly and Hebden were behind almost before they’d got started. Matthew very rarely makes this kind of mistake so it was particularly unfortunate timing for it to happen in this match.

Andy Bak seemed to be doing perfectly well against Pete Mulleady’s Dutch Defence on board 2. That was until he gave up a piece for three pawns. It was suggested later that there was nothing wrong with Andy’s concept but perhaps he didn’t follow up as accurately as he needed to for he was forced to resign not too long after the material imbalance appeared on the board. Already the deficit felt like an insurmountable obstacle for the remaining Hebden players to overcome – especially with the extra pressure that comes from being behind and needing to win games. 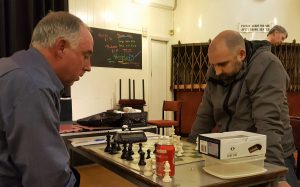 Todmorden’s Dave Patrick (left) is the league’s top scorer with 7½/8 after his win against Nick Sykes on Monday. [Photo by Andrew Clarkson]

The outcome of two of those three boards became academic when Dave Patrick finished off Nick Sykes on board 5. Nick was particularly unhappy with his play but he too has had a good season for his team thus far with four wins and three draws before this match. In this game he too wasn’t his usual self.

With nothing left to play for the remaining two boards were simply a matter of pride for Hebden Bridge. In fact they could well have been white-washed as Andrew Clarkson certainly had winning chances at a key moment in his game with Dave Shapland and Chris Bak was a pawn down against Phil Cook on board 3. The two games couldn’t have been more different however as Chris’s opening experiment against Phil yielded him nothing but a sterile position with no advantage whatsoever. Under such circumstances any mistake at all can be terminal and so he did well to hold on after blundering a pawn. Some accurate defence limited the arrears and Phil knew there was no need to grind it out so quickly settled for a draw.

Dave and Andrew’s game have a habit of being tense and complicated encounters with neither player backing away from critical variations. This game was no different and both players have annotated it in the game viewer at the end of the post. For once Dave seemed to get a reasonable position out of the opening against Andrew’s Pirc Defence and certainly held the advantage early in the middle game. However, once his attempts at a direct assault ran out of steam Dave began to lose momentum, Andrew found a clever way to activate his queen and the tables turned.

With both players getting into hot water on the clock as well Andrew allowed Dave to sacrifice a knight on d6 in order to get an advance, passed e-pawn. It looked dangerous but Andrew defused it with some precise defensive moves and the game exploded when Dave responded by giving up his queen for a rook and the initiative. The idea was unsound but it needed an engine to prove it and, with both players very short of time Andrew finally made a couple of less accurate moves that enabled Dave to recuperate his materials losses and reach an end game on where both players had a knight and five pawns. At this point Andrew offered a draw and Dave accepted as it seemed that any advantage he might have had was notional and it seemed pointless risking it all for a win when the match was settled already.

So, the final score was a convincing 4 – 1 to the champions who are now just a point behind their visitors with a match in hand. The title is in their grasp once more provided they can win their remaining matches. Here is the score card from Monday’s match:

Also on Monday night, Belgrave ‘A’ suffered a surprising drubbing at the hands of Halifax ‘B’. The visiting side took full advantage of their ‘A’ team not having a match to strengthen their lineup. Never the less a ½ – 4½ defeat was not a likely looking possibility before a piece was moved. Only Gordon Farrar’s draw with Scott Gornall on board 3 saved the hosts from a whitewash as Richard Porter defeated Ian Hunter, Carlos Velosa beat Richard Bowman, Howard Wood took down Angel Gonzalez and Vivienne Webster won against Les Johnson. This signal triumph meant that Halifax ‘B’ over took Hebden Bridge ‘B’ to get onto 4 points. Martin Syrett’s men would now have to win their away match against Huddersfield on Wednesday in order to get back off the bottom of the league table.

It was always going to be a tall order for the ‘B’ team and the mountain grew even higher when Martin was once again unable to find five players for the match. The club’s miserable week continued as the four players who did make it suffered a cruel fate at the hands of a resurgent Huddersfield side who should probably have beaten the Hebden ‘A’ team last time out. Only John Kerrane could hold a draw against Dave Tooley on board 3 although of course the other players put up stern resistance, they were all swept aside. Here’s the final scorecard for the Wednesday match.

A week to forget and move rapidly on from for both our club’s league 1 teams. Tomorrow is the final round of the Calderdale Individual Championship so hopefully those involved in that can recover some of their morale before the next round of League 1 fixtures on the 20th of March when Hebden Bridge ‘B’ will be taking their bye round and Hebden Bridge ‘A’ will travel to Halifax ‘B’ in a match they simply have to win and convincingly too. Meanwhile Halifax ‘A’ will host Belgrave and Todmorden ‘A’ will host Huddersfield who have thus far been the only team able to beat them this season. The champions will be itching for revenge.