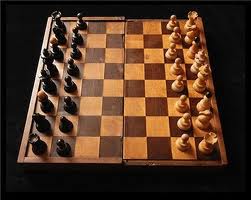 Did Lenin and Hitler face off over this chess board?

Like many chess enthusiasts I was interested to see some news coverage (just over a year ago) about an etching from the 1900’s of Hitler and Lenin playing chess together. Well, the story has now been resurrected from the bowels of the internet by Telegraph journalist, Guy Walters. Evidently both the etching, and the chess set that the two men are supposed to have contested said game upon, are being auctioned by Mullocks in London today. If you have a spare £10,000 or so, you might fancy bidding.

For the historians out there I suppose that the debate about the provenance of these artifacts is all very interesting but as a chess player what I’m really interested in is the missing piece of the puzzle. I am talking of course about the scoresheet for the game which would surely refute any lingering doubts about the authenticity of the other items. Not only would the missing scoresheet add exponential value to the board and the picture it would also answer the crucial questions that every chess player really wants to know the answers to. “Who won the game and what moves were played?”

Fortunately for you dear reader the answer to these tantalising questions is close at hand for, in the year or so since the story first came to my attention, I have been conducting my own investigations into this fabled over-the-board encounter. I must confess that for a long time my best efforts were totally ineffectual but then, quite by chance only a few weeks ago, after a pleasant exchange of banter with someone I played a game against online, I stumbled across our humble blog’s first exclusive scoop!

You see, the person I had been playing against turned out to be none other than Lady Cynthia Blunderboro whose Father, Horace (the 4th Duke), was instrumental in organising the game and was actually present when it was played. Most importantly of all however, he kept Hitler’s copy of the score sheet! A player of no little ability herself, Lady Cynthia has kindly agreed to re-tell the story of the game and provide some commentary on the moves exclusively for this blog.

I must confess that I was rather surprised when Intermezzo mentioned the sudden appearance of the Lenin and Hitler etching and chess set during the course of our online chat. I say this only because I had hitherto assumed that the encounter was common knowledge. Daddy first told me the story when I was a teenager and I remember the morning vividly. It was the 31st of January, 1933 and Adolf Hitler had just swept to power in Germany. Daddy had almost choked on his toast when he read the story about it in that morning’s newspaper.

“Good God!” he spluttered “who would have thought it possible?”

Naturally, I had enquired as to the nature of his outbourst and he quickly explained that “young Addy” had been an acquaintance of his during his time at the British Consulate in Vienna during the early 1900’s. He went on to recount that they had met at a chess club (he forgot which!) and played a few friendly games. Despite the fact that Daddy described the then 20-year-old as “an uncouth and loutish layabout with absolutely no class whatsoever” the two of them became regular playing partners. In fact I suspect that Daddy only tolerated Hitler’s company because he was rather easy to beat.

On one such night of contemplation Hitler prevailed upon my Father on the subject of political dogma which, even then, was a favourite hobby horse of his. At some point, quite inadvertently, Daddy found himself proclaiming that some of his “best friends” were political thinkers. By the end of the evening (and, I fancy, rather too much schnapps!) Daddy found that he had agreed to introduce Hitler to Lenin the next time the latter was in town. Never one to let anyone renege on a promise, Hitler pestered my Father remorselessly until the meeting had been arranged, the more so when he discovered that Lenin was a keen and very proficient chess player.

Finally, and after much pulling of strings, Daddy managed to arrange for the pair to meet and play a game of chess as the pretext to an “intellectual discourse” on the merits of Bolshevism. I should add that in order to achieve this he had to considerably over-inflate both Hitler’s chess playing strength and his intellectual regard for Lenin. The two men met at the home of a prominent Viennese Jew who knew Lenin well and who owed my father several quite large favours. Daddy described to me that on the night of the encounter, after the exchange of some brief and rather stiff pleasantries, it was agreed that the game of chess should take place immediately.

By means of a closing remark I should mention that Daddy only saw Hitler once more after that night in 1909 and on that occasion Hitler went so far as to cross the street to avoid having to talk to him. Daddy later told me that he didn’t even recall having kept Hitler’s scoresheet from that night until, many years later, he was turning out the pockets of a very old smoking jacket in search of a telegram from the King that he had misplaced. His search for the telegram was unsuccessful but he did turn up two fluff covered lemon drops, a saucy picture postcard and Hitler’s scoresheet.”