As readers will have seen here yesterday, Dave Wedge retained his title of Hebden Bridge Chess Club Lightening Champion on Monday night. Yesterday’s report mentioned that Dave had to see off the spirited challenge of his son Matthew in the final round. The report also records that the game had to be adjudicated after the full allocation of moves (60) had been played without a result having been achieved. However, I am now in a position to reveal to readers more precise details of just how close it was.

The game was stopped in the position below with Dave playing white. He is an exchange up as you can see.
ï»¿

ï»¿
This position was, to universal agreement, adjudicated as a win for white. However, while the assessment of the position appears to be correct it may have been fortunate for Dave that the tape ran out when it did because immediately after the game had finished he said he had intended to proceed by playing 1.Ke6.

White’s intention here is to walk his king up to the black g-pawn and win it. However, had the game continued and this move been played then Matthew would have been given the chance to find the excellent rejoinder of 1…Nh8! when the game would immediately have been drawn as White’s rook is now trapped. Black will win back the exchange and draw the game.

Having found this nice tactic the next morning I then decided to use the above position as a bit of endgame practice and see if I could find the right approach for white. It was at this point that I inadvertently stumbled upon some very interesting hidden depths. I decided to play the white side of the endgame against my computer and figured that White’s first move must be 1.Ra6. This would enable the white king to approach the black g-pawn without allowing black the Nh8 trick. My game with Fritz now continued from the above diagram as follows…

Reaching the new position on the left. White has achieved his objective and is now threatening simply to capture the g-pawn and win the game. However, at this point Fritz played…

And I realised that matters were not as simple as they first appeared because now 7.Rxg7 will run into Ne6+ and this time white loses a whole rook! “Ah well” I thought, “all is not lost I can try this a different way”. So next I tried… 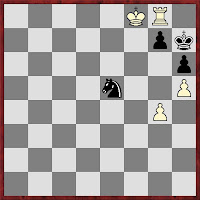 Which now gives us the position in the third diagram. White once more appears to have managed to arrange his pieces in such a way as to win the g-pawn, but again he is thwarted! This time Fritz played…

And now it becomes clear that white can’t escape from the knight checks without moving his king away from the rook!

All of this leads me to believe that the original adjudicated position might in fact be drawn! It seems that no matter how white approaches the task of winning the g-pawn, black has a cunning manoeuvre to foil him. This is a most interesting endgame study. I invite readers to take a look at the start position and try to find a win for white. Please do add a comment below or send me an e-mail with your ideas and solutions.

It must of course be said that, even had this final game of the tournament been drawn, Dave would still have been crowned champion using the usual tie break method of “sum of consequent scores”. That’s not really the point though, the endgame study is fascinating. 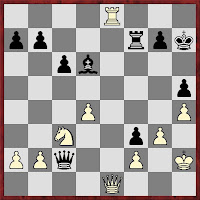 I would like to give one more position from the tournament which I was able to remember from my own last round game. This position is interesting because it illustrates some unique aspects of Lightening chess as opposed to Blitz chess where each player has 5mins on his clock.

In the diagram position (left) it is black to play. This may not have been the exact position but the key features are all correct. At this point I decided to take a risk and go for 1…Bxg3+. Of course I only had 10 seconds to decide on my move and so I couldn’t calculate all the variations. Now white has a dilemma on his hands. He can’t capture the bishop with the pinned g-pawn, so, in only 10 seconds he has to decide whether or not to take it with his king! On this occasion White chose to go for it with 2.Kxg3 and I was then alert enough to spot 2…Qg6+ with which forces mate on g2 next move. I hadn’t been able to see the whole idea when I offered the bishop sacrifice. In Lightening chess you sometimes have to trust your gut instinct and hope for the best.

By way of bringing coverage on the tournament to a close I give below the final scores for all competitors: