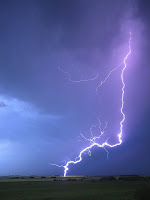 The new Calderdale Evening Chess League is just around the corner (it starts next Monday) and, in the time honoured tradition, Hebden Bridge Chess Club held its annual Club Lightning Competition to give club members the opportunity to limber up in a light-hearted yet competitive way.

In addition to this contest several members of the club joined other Calderdale players at the Huddersfield Rapidplay on Sunday the 11th of September.

Today’s post reports on the outcome of both competitions and we begin with John Kerrane’s report for the Hebden Bridge Times.
ï»¿ï»¿

With the current lightning champion, Dave Wedge, retiring from active play for the club, the competition was wide open, and several of the stronger players were in contention from the outset. The early leader was Matthew Wedge-Roberts, but he was overhauled by Matthew Parsons, who finished the evening with 5/6, while Wedge-Roberts, with 4½/6, came second.

This result confirmed Matthew Parsons’s fine form for the beginning of the new season, after he finished second in the Huddersfield Rapidplay Congress the previous weekend in a very strong field. He managed to beat the strongest player in the competition, Peter Shaw, in the first round and was, in fact, the only player not to lose a game.

Next week, the club’s players, after limbering up, must get down to some serious business when the league matches start in earnest, with all four of the club’s teams in action on the first night.

So, Hebden Bridge Chess Club has a new Lightning Champion in the form of Matthew Parsons. He was a worthy winner. The final ranking table of all entrants is published below. 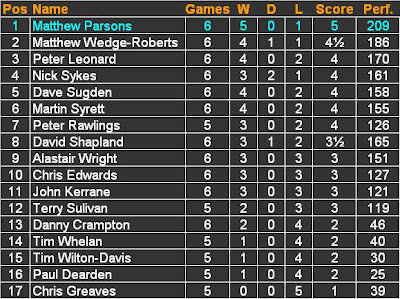 I know that some contestants were very interested in the software I used to generate the pairings and enter the results. It’s a piece of free software called Sevilla and I found it very easy to use. It probably saved us 30 minutes of time working out the pairings in between rounds so I’d definitely recommend it to anyone who wants to run a competition at club level.

The format of lightning chess often leads to some quite comical circumstances that you simply wouldn’t see in any other form of the game. In particular the rules dictate that there is no need to announce check and that any king left enprise can be captured to end the game. Likewise, any illegal move that isn’t picked up on before the next move is due to be made has to stand. When you only have 10 second to make each move these idiosyncratic rules come into play more often than you might imagine. I won two of my games on Monday night by capturing my opponent’s king and I’ve witnessed a game of Lightning chess that ended with one player having two bishops operating on the same colour squares! Neither player had the slightest idea when the error had occured.

A particularly amusing episode took place on Monday in the final round as two of the club’s less experienced players battled it out for the final point of the round. Tim Wilton-Davis was playing White and was up an exchange and several pawns and appeared to be cruising to a win when Tim Whelan, playing Black, gave check with his one remaining piece, a knight. When the buzzer went 10 seconds later Wilton-Davis advanced a pawn and, immediately realising his blunder, actually got up from the board in disgust to storm off. Meanwhile, Whelan, totally absorbed in proceedings, didn’t seem to notice Wilton-Davis’ distress and didn’t notice that his opponent’s king was enprise! When the buzzer sounded again he also advanced a pawn at which point Wilton-Davis returned to the board with a smirk to move his king out of check and he went on to win the game. Whelan meanwhile remained completely oblivious of his oversight!

As a parting shot for this post I’d like to publish Matthew Parson’s excellent win against Peter Shaw from the Huddersfield Rapidplay. This was a notable scalp for Matthew and he went on to be undefeated for the rest of the day tying for second behind Shaw who managed to win all but one of his remaining games to win with 4.5/6. The game below is published using a new game viewer (yet another!) by Casaschi. I’m hoping to use this viewer more often in future as hopefully I will be able to display all the games in a single league fixture through a single viewer. It’s only draw back is that it isn’t so good with annotations and commentary (there is a limit to the number of characters one can have in the PGN file) and so for single games with commentary I hope to use another viewer that is best for this purpose. As always I’d value feedback on the viewer below.