The Yorkshire Chess Association released their new 2011 grading list earlier this week. These new ratings are based on all games played between 1st of June 2010 and 31st of May 2011. I’ve collected (and slightly edited) the list for Hebden Bridge Chess Club members below. You can also go to the YCA’s website and have a rummage around for even more details. 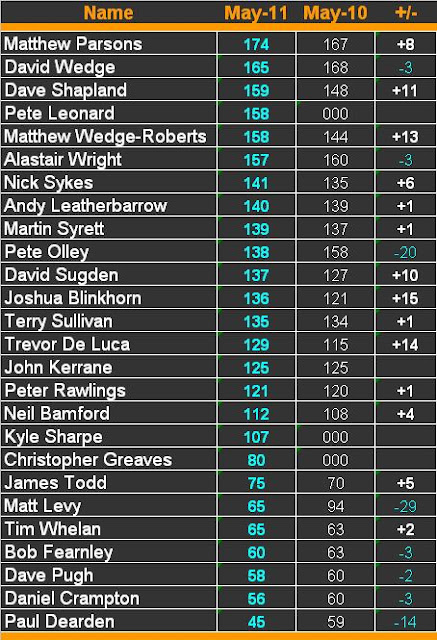 I’ve edited the list above in order to remove any inactive players. Here are some points and comments about this list points that I think are worth making as team captains start to plan for next year’s league campaigns.

All I can say about this list is that I hope Huddersfield ‘A’ aren’t able to field all 4 players that fall into this bracket on a regular basis next season. There must be something in the water over there! Incidentally the 5th Huddersfield player on the list is John Lavan and his new grade is 169! That’s a pretty frightening Huddersfield ‘A’ team they might have there.

In my view this new annual list and the ongoing live ratings (Jon Griffiths the YCA Grader has announced his intention to publish monthly lists next season as well!) raise some interesting questions about how league teams should be selected and organised for the coming season. At present the Calderdale League guidelines states that…

“All players must be listed in order of known playing strength. grades used for reference.”

The quandary is should captains be using the live ratings or the 2011 ratings to help them determine this? Which should take precedence? Bare in mind that at the outset of the new season both the annual rating and the live rating will be the same but as the season progresses the live rating will change and become a more accurate reflection of a player’s current strength than the 2011 rating and the more games a player plays the greater the potential disparity between the two. Should captains therefore swap players around during the course of the year based on live ratings or continue to use the 2011 rating to guide board order regardless of current from?

Let me provide an example of how this current ‘static’ system of selection can affect both teams and individuals during the course of the year. Last season Hebden Bridge ‘B’ correctly deployed Pete Olley on board 1 because his 2010 rating was higher by a 10 point margin than the team’s board 2, Dave Shapland. However, Pete struggled on board 1 and as his live rating dropped and his colleague’s grades rose it might have made sense to swap the board order to reflect the form. We decided not to do that because we wanted to be consistent and use the 2010 grade to decide board order as we would have done in previous seasons despite what the live grades told us. There was nothing wrong with that approach but as a result Pete endured a tough and dispiriting season and his rating plummeted. This season he will operate at a different level but the point remains that the live grading system could allow team captains to modify their board order to reflect the form of their players.
The second related issue becomes apparent when we consider those players who have grades that have been calculated from a small base of games in the previous season and here I will use the other Pete (Leonard) as an example because it illustrates the point neatly. On the basis of 7 games played last season he has a new grade of 158 which should dictate that he must be deployed in the upper reaches of the either the club’s ‘A’ or ‘B’ team next season despite the fact that he hasn’t yet played a rated game against opposition graded higher than 140. Now, it may well be that Pete will acquit himself with great ability in this rarified atmosphere (as I happen to think he may) and completely justify this new rating. Alternatively he might struggle against the standard of opposition he will be compelled to meet and have no way of dropping down the board order to operate at a level that suits his live rating and allows him to rebuild his form and confidence.

At the heart of the matter is the fact that the current grading system doesn’t express a preference for the number of games it believes are required to calculate a robust rating. I seem to remember that in days gone by players who had played less than 10 rated games in the previous season got an ‘E’ (for estimated) placed after their grade and this enabled team captains and tournament organisers some room for latitude as they assessed the player’s strength. Now that we don’t have this standard it appears that there is a danger some new players will have to be thrown in at the deep end before they are ready and at the expense of more experienced players who perhaps should be playing further up the board order.

Having considered all of the points above it seems to me that neither of these issues (having two ratings and the lack of a minimum games standard) will really cause a problem if teams are required to use the live ratings as a means of deciding their board order. If this regulation is put in place then (hyperthetically) if Pete Leonard did struggle next season and performed poorly then he could drop down the board order and find the right level to play at instead of being trapped on a high board for the whole season getting walloped. The same regulation could have allowed Pete Olley some relief last season as well. I’ve been in that position before myself and it isn’t a nice experience.

Of course the subject of gradings and how they are calculated and applied always stirs up passionate debate amongst chess players and it is certainly no different in Calderdale. For the record my opinion is that live ratings are a good idea but I also believe we need to adapt our league regulations and guidelines to reflect the new system. Specifically I think it is important that all team captains in the league use the same criteria to select their team order. They should all use the live rating or all use the annual grade and the regulations should be amended to enforce the preference.

I would be very interested to hear readers views on the subject of ratings or feedback on the new club list.

11 Responses to “Rates of interest”