Having been well and truly put in their place in round 1 the collective underdogs bit back in round 2 of the Calderdale Individual Chess Championship at the Trades Club on Monday night. This year’s 5 rounded event takes place on the second Monday of each month from November through to March. November’s 1st round pitted the top half of the draw (in grade order) against the bottom half and the top dogs won every game.

Round 2 always threatened to be more interesting as the grading gap between all of those players on 1 point reduced considerably and this turned out to be the case with several cases of ‘giant killing’ and a couple of ‘giant pacifications’ handed out. There is plenty of material for us to review in the games section so let me first provide you with the results of the round. 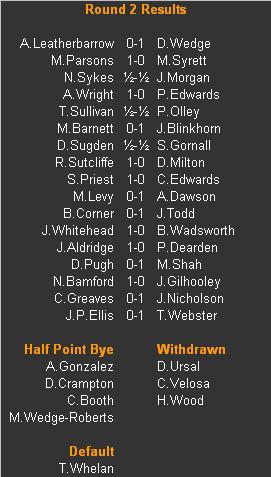 Four players exercised their right to take a half point bye and these included the tournament’s top seed, Chris Booth of Huddersfield.

Several efforts are worthy of a specific mention. First of all, Nick Sykes managed to hold a draw against the 4th seed John Morgan in one of the evening’s most interesting games. John played his trademark St George’s Defence (1…a6 and 2…b5) and Nick responded sensibly rather than trying to refute the opening outright. He maintained a potentially dangerous initiative in the early part of the game before John’s accurate play succeeded in equalising the position. The players then concluded peace with plenty of wood left on the board but never-the-less in a dead even position.

On board 5 Terry Sullivan also played well with the White pieces to keep 6th seed, Pete Olley, at bay. The opening, a Ruy Lopez Exchange Variation, has a reputation for being drawish but in fact both players tried hard to gain an advantage in a simplified position before agreeing terms.

The advantage of the white pieces also offered the underdogs with some consolation on boards 7 and 9. On board 7 Dave Sugden draw with Todmorden’s Scott Gornall and on board 9 Steven Priest read Chris Edwards his last rights.

So far so good for the underdogs, but even better was to come. First of all, James Todd scored a superb victory over Brian Corner with the Black pieces. Then, at the very end of the night, Josh Blinkhorn checkmated Mike Barnett. Showing nerves of steel Josh had only 30 seconds left on his clock to deliver checkmate with his king and queen against Mike’s bare king. Anyone who has tried to do that kind of thing in a time scramble knows how easy it is to allow a stalemate.

Elsewhere, the top dogs held sway. The board 1 clash saw two time trouble addicts slugging it out. Andy Leatherbarrow and 2nd seed Dave Wedge are both infamous for their clock-management antics and indeed, both players ended up with 5 minutes apiece to play their last 10 moves before the time control. Having made it that far in one piece, Andy then tragically blundered a knight in the end game to give Dave the win.

Finally, here are the standings after two rounds.

I’m hoping to publish some photos and also more interesting positions from the round 2 games at the end of the week.